There's a man on Española Way with a ball python coiled around his neck. A young child, flanked by terrified parents, walks up and asks to stroke the creature's head. Some time later, the man presents the reptile to a pair of 20-something vacationers who backpedal in fear.

Then he notices a crowd of ten or so Italians sipping wine and puffing cigarettes at Mercato Della Pescheria (412 Española Way, Miami Beach; 305-534-5822; mercatodellapescheria.com). He sneaks up behind a woman who's just about to extract the creamy, briny goodness from the heads of a pair of giant chili-oil-lacquered shrimp ($17). She notices the snake's piercing black eyes inches from her face and screams, sending the crustaceans flying as the snake man and her friends enjoy a good laugh.

Just another night on Española Way, a historic walkway lit by twinkling string lights and flanked by rose-colored stucco buildings. During the '90s, when Miami Beach's renaissance began, Kris Wessel ran Paninoteca here. Restaurateur Barclay Graebner, who owns El Portal's Sherwood's Bistro & Bar and Wynwood's Morgans, also got her start on this kitschy street with Blu Dog Café in 1999. It was a backdrop for movies such as The Birdcage and Miami Rhapsody. Mercato joins handmade-pasta haven Pane e Vino and the new La Leggenda Pizzeria, which is on the opposite side of Washington Avenue, in a surprising trio of solid choices. 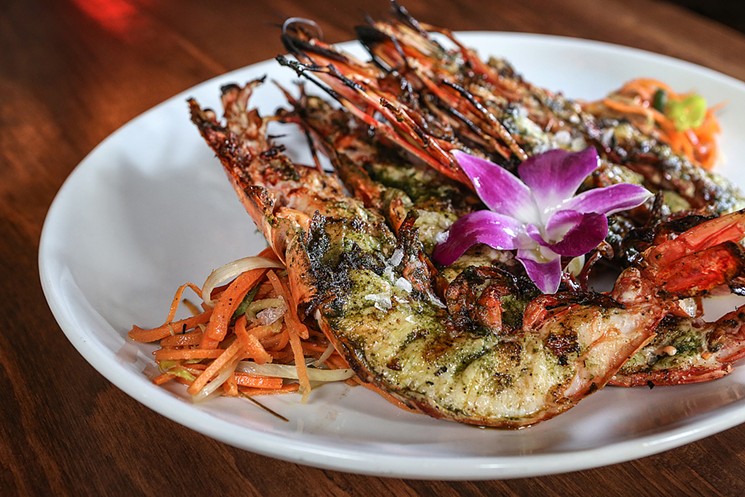 Mercato is actually a revamping of Cafe Nuvo, which was run by the same owners and chef Alex Martinez, who's been working in Miami Beach at various restaurants since the mid-'00s. It's now the spitting image of an Italian street scene, fit for a postcard. Enter through a line of white archways that makes the place look like a grouping of small shops plying meat, cheese, and dry goods. Through a window, a young woman in a stark-white chef's coat can be seen rolling out seemingly endless sheets of pasta that are hung to dry like curtains. Inside, the walls are lined with scratched vintage-looking mirrors interspersed among sections of exposed brick, all illuminated by dim yellow lights.

He hands each child a little bite of salty, cheesy pasta, and everyone is delighted.

Almost a quarter of the menu here lists raw preparations of mostly tuna and salmon, alongside Kumamoto and Blue Point oysters, king crab legs, and Maine lobster. There is also speck, capicola, and bresaola that can be arranged on boards with classic Italian cheeses such as grana padano and robiola. Yet the humble ceviche ($16), which on one night contains mahi-mahi and another corvina, is the most attention-grabbing thanks the meaty hunks of fish just barely firmed with plenty of acid and tiny flecks of celery that add crunch to each bite. It's just the thing to push back against a hot summer night.

Sidewalk scenes are much of the draw here. Boys zip down the street on skateboards chased by screaming parents. One loses his balance, sending the board flying off into a crowd. His brother rushes over to pick him up, scans for injuries, and then turns around to look for their parents, who sensibly suggest they all get gelato. 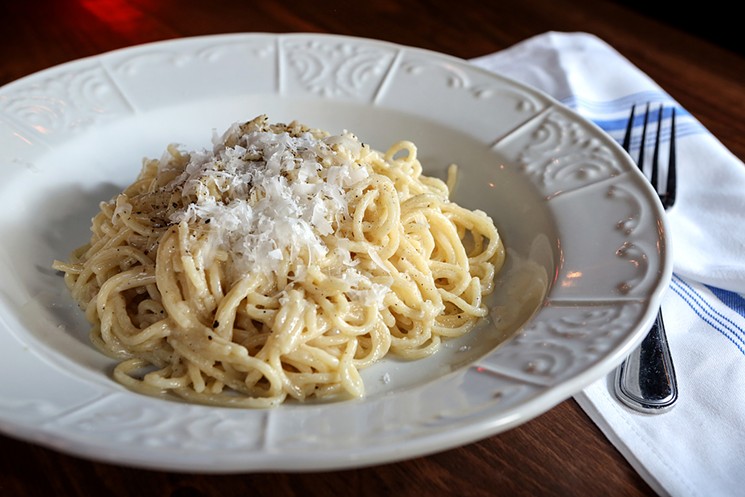 By the time it's all over, the next round of dishes arrives. Mercato prides itself on homemade pastas, 11 in all, which are turned out behind that glass window adjacent to the entrance. Nevertheless, the benefit is obvious. A bowl of thumbnail-size orecchiette ($21) arrives draped in a light, salty, tangy tomato sauce with bitter rapini that remains firm yet tender. Both the sauce and the biting greens are ideal matches for small, sweet mussels that make a fine stand-in for the sausage that often fills out this dish. The cacio e pepe ($28) is a textbook example thanks to its sizable knot of al dente noodles. Of course, it helps that the dish is prepared tableside by a server who tosses the hot pasta in a depression atop a massive round of Pecorino Romano cheese until it picks up that creamy richness.

As the waiter prepares the pasta, two small children walk up and watch the process in awe. They don't respond when he asks, in Spanish, where they're from. They stare. But when he asks again, their eyes light up and they proclaim Buenos Aires. He hands each child a little bite of salty, cheesy pasta, and everyone is delighted. Servers here are surprisingly attentive.

Another piece of the puzzle is plin ravioli ($28). Fresh, firm, and tender purses stuffed with bits of sweet lobster are filled out with bitter chopped Swiss chard, ricotta cheese, and a hint of fragrant nutmeg that stitches together each purse. Like the ceviche, Mercato's filled pastas are often in flux, so although the plin has been swapped out for lobster ravioli, it could be something different next week. 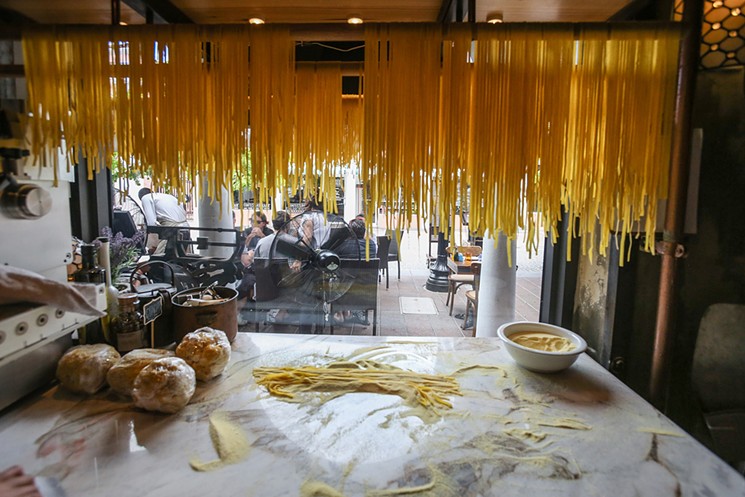 The same goes for the seafood, which includes obligatory plates such as salmon and Chilean sea bass (née Patagonian toothfish). But there is often a better-sourced and far better-tasting option. On one night, it was golden corvina ($28), featuring a fat fillet, well seared and still juicy, perched atop a squid-ink polenta cake full of oceanic salt and covered with roasted vegetables. More recently, it was a whole hog snapper ($28), roasted and buried under a forest of arugula, cherry tomatoes, fennel, and capers.

Desserts are a bit more traditional. The tiramisu ($11) is a must. These days, many kitchens give this proud sweet barely a thought. It's prepared ahead of time or cut out of a soggy cake. Here, though, each order is assembled at the table, which means that rather than mushy lady fingers, the slightly sweet cookies maintain their crispness as they absorb the booze-spiked espresso sauce.

Eat quickly, though. There's a guy walking down the street with two diaper-wearing lemurs. One just grabbed a handful of nachos off a table at the neighboring Mexican restaurant, and now he's looking at you.