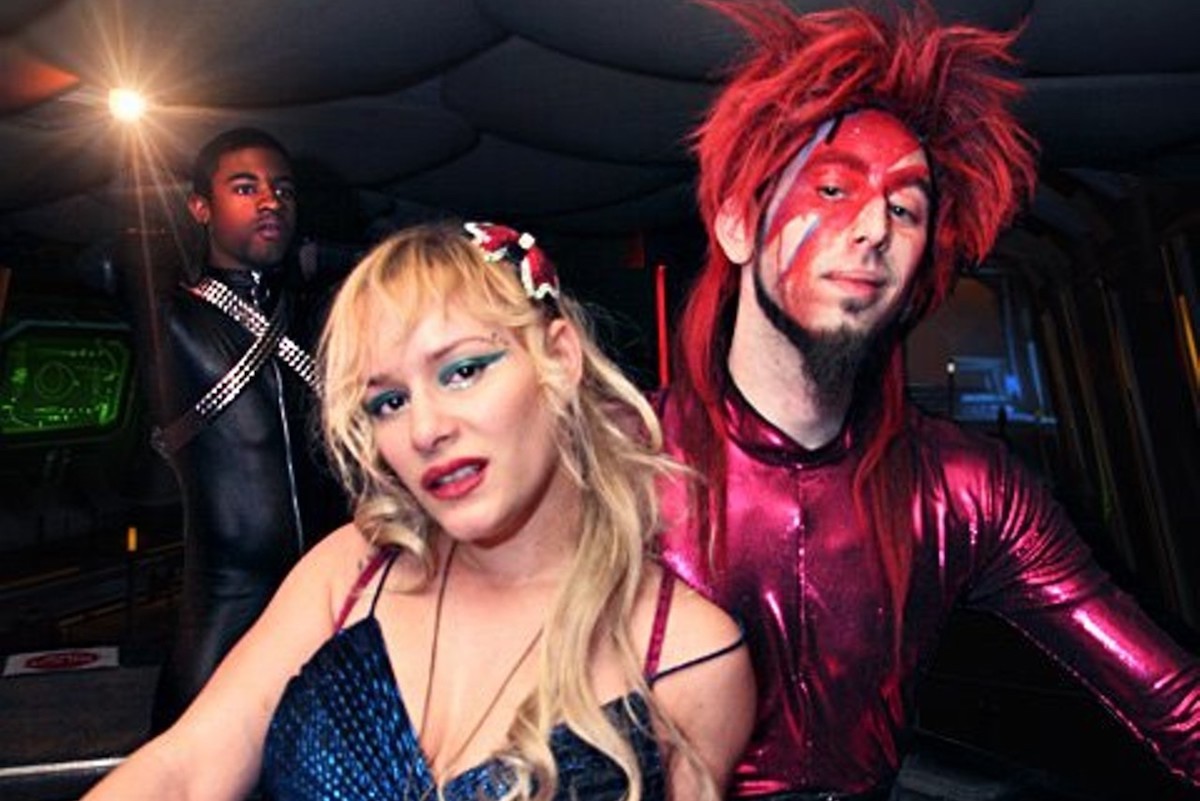 Courtesy of Andrew Schwartz.
Dr. Jackie Ransom and Andrew Schwartz of Armada!
A year and a half after his passing, it still feels odd to refer to David Bowie in anything other than the present tense. During his five decades as a recording artist, Bowie informed contemporary culture by looking to the future while taking care to consider the past. If he seemed other-worldly, it was only because his influences — from the choreography of celebrated mime Lindsay Kemp to the perennially futuristic clang of Kraftwerk — were unfamiliar to his adoring masses. Author Paul Morley once referred to Bowie as “the human equivalent of a Google search,” considering his ability to synthesize countless traditions, artists, and philosophies to produce something new and unmistakably unique. In reality, Bowie might very well have been the most earthbound pop star of them all — not a prophet or a Stone Age man, just a mortal with the potential of a superman.

“We knew intellectually that Bowie was mortal, but on some level it never really seemed like he could die,” says Andrew Schwartz, the lead singer of Miami cover band Armada!. “That's just such a banal thing to do, you know? Bowie seemed like he'd just evolve into a being of pure energy and point the rest of us to the monolith that would transform us and bring us to his level. He was larger than life and every other cliché you can think of.”

Schwartz and Armada! will be among those paying tribute to the icon at the eighth edition of Bowie in Space, taking place August 12 at Churchill’s Pub. What could have been a one-time gag has transcended its Flight of the Conchords-indebted origins to become an annual communion, a hub upon which Miami’s Bowie faithful can descend and revel in their shared love for the Thin White Duke. It helps that there’s a costume contest.

In keeping with the varied and deeply personal nature of his work, those participating in Bowie in Space have wide-ranging and intimate reasons for wanting to pay homage to the late artist. Ian Michael, the entertainment director for Churchill’s and sometimes-band member of Armada!, picked up contact juggling as a hobby after watching Bowie’s turn as Jareth, the Goblin King in Jim Henson’s Labyrinth.

"I was a huge fan of Bowie growing up. His music was everywhere for me as a kid," Michael says. "'Space Oddity' had a huge impact on me, but his performance in Labyrinth changed the course of my life forever; now I juggle professionally." Luckily for attendees, Michael will share his talents during the event.

Asked about his favorite phase in Bowie’s career, Steve Monell, the drummer for Godsend, one of the bands participating in Bowie in Space, couldn’t decide on just one period or album.

“His '70s output is incredible, and I always find myself going back to that time,” Monell says. “I love the Scary Monsters album too. That may be my favorite album, at least right now. Ask me tomorrow! I still like Tin Machine, especially the first album.”

Monell's admiration for Tin Machine — Bowie’s often-overlooked late-'80s/early-'90s band — speaks to both the breadth of Bowie’s artistic achievements and the level of enthusiasm being brought to the event at Churchill's. According to Monell and Schwartz, the plan is to play a diverse selection from the Bowie canon; they hint that material from the industrial-tinged '90s albums 1. Outside and Earthling might make an appearance, as well as choice cuts performed on the sometimes-maligned Glass Spider Tour, which celebrates its 30th anniversary this year.

Because this year's Bowie in Space is only the second since its namesake’s passing, those involved expect things to get a little emotional.

"Well, one of our friends actually fainted and had to leave the venue,” Schwartz recounts from last year’s event. “He says it was unrelated, but the Thin White Duke works in mysterious ways...”