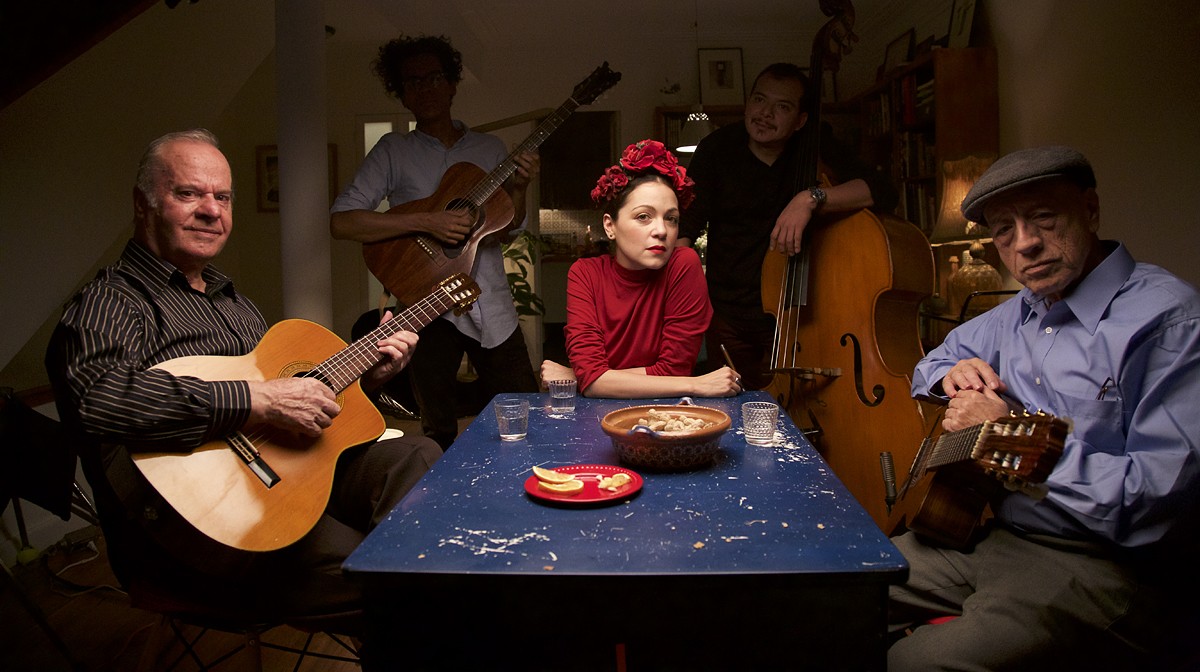 Flower crowns, cotton candy, and fresh R&B tunes for your slow-grind pleasure. No, it's not a new Coachella-inspired Beyoncé track. It's RnBae, a monthly showcase of underground R&B thrown by local artists, curators, and DJs. If you're looking for a sweet spot to spend some romantic time with your snuggle buddy (or just your regular buddies), you'll find Aleicia Nicole, Viie, and Melody Reyne on the Shirley's stage making sweet love to your eardrums to get you in a vibe. So don your free flower crown, spend a couple bucks on the sweet stuff, and get ready to groove. 9 p.m. Thursday at Gramps, 176 NW 24th St., Miami; 305-699-2669; rnbae.com. Tickets cost $10 in advance or $15 at the door.

The Stonewall riots erupted June 28, 1969, and National Pride Month happens every June to commemorate that catalyst of the modern LGBTQ movement. Because the revolution was started by queer folks shaking their asses, it's important that the tradition stays alive. That's why Yes, a monthly LGBTQ dance party, is launching this week. The first installment will double as a birthday party for Brian Rafferty, a producer of NYC's gay nightlife. Erez Ben Ishay, GSP, and King Cut will curate tunes to keep the revolution alive, but you can always bowl or skate if the club isn't your thing. 11 p.m. Thursday at Basement Miami, 2901 Collins Ave., Miami Beach; 786-641-7119; basementmiami.com. Admission is a suggested donation of $20.

What would your dad enjoy more than sipping a cold beer between puffs of a fine cigar? How about chowing down on Cuban food and playing a few games of dominoes? To commemorate the launch of Concrete Beach's Havana Lager can distribution, the brewery is debuting a monthly party including your favorite Cuban pastimes. The first Havana Nights event will feature a live salsa band. Saturday brings a cigar pop-up shop, and Sunday gets dad's boo in the picture with free salsa lessons. In true Cuban fashion, be prepared to talk shit and wile away the hours on Caribbean time. 7 p.m. Friday, Saturday, and Sunday at Concrete Beach Brewery, 325 NW 24th St., Miami; 305-796-2727; concretebeachbrewery.com. Admission is free.

Movies aren't meant to be mindlessly consumed. They should be processed, discussed, and appreciated as windows into cultural analysis and understanding. Chic Critiques already knows this, and with the success of their panel discussion of Get Out, the film and book reviewers decided to take their powers of observation to Miami during the American Black Film Festival. With a panel of writers, producers, and creatives, you can discuss Black Love Cinema Classics such as Love & Basketball, Poetic Justice, and Love Jones. If you need a preview, check out their YouTube channel for videos of past discussions. 2 p.m. Friday at the LAB, 400 NW 26th St., Miami; chiccritiques.com. Tickets cost $10 via eventbrite.com.

With experience that ranges from creative development for Xbox to performing globally in dance theater productions, Natasha Tsakos is a multifaceted artist. A graduate of Miami's New World School of the Arts, Tsakos hasn't stopped blowing minds. Now she's taking on "a peculiar commentary on the human condition facing the perplexities of modernity" in her play Colours. In this small production of self-proclaimed nonsense and absurdity, follow a fool as he comes to terms with a postapocalyptic new world, with a bathtub thrown in there somewhere. 8 p.m. Friday and Saturday at the Sandbox at Miami Theater Center, 9816 NE Second Ave., Miami Shores; 305-751-9550; mtcmiami.org. Tickets cost $25.

Those of us who remember Wynwood's past as a barren square mile of random warehouse art spaces and weave shops are probably getting too old for the neighborhood's present. We ask ourselves things like Why do people want their faces to look like dogs? and What does "lit" mean? Well, the owner of Wood, one of Wynwood's hottest bars, understands you. That's why he's opening a bar dedicated to throwbacks. They're not just for Thursdays anymore, kids. The grand opening of B-Side will include a performance by Special Ed of "I Got It Made" fame, plus spins by DJ Ynot. 10 p.m. Friday at B-Side, 2898-B NW Seventh Ave., Miami; 786-780-2750; facebook.com/bsidemiami. Admission is free with RSVP at eventbrite.com.

There's no shortage of reggaeton or salsa on our streets, but Miami's rich Latin-folk tradition is often ignored in favor of twerking in the club. That's why Natalia Lafourcade's newest effort, Musas, is such a gem. The delicate guitar work of her accompaniment, Los Macorinos, almost seems made for the chanteuse and her silky soprano voice. Her U.S. tour will kick off at the Olympia Theater, where she'll perform from Musas and her Grammy-winning album, Hasta La Raiz. 8 p.m. Friday at the Olympia Theater, 174 E. Flagler St., Miami; 305-374-2444; olympiatheater.org. Tickets costs $35 to $55.

You don't need to listen to 103.5 the Beat to be familiar with Papa Keith. Since the beginning of his career, the native New Yorker has had his finger on the pulse of the hip-hop and Caribbean cultures that make the Magic City so uniquely itself. He's using that influence to make a positive impact on black communities in Miami through his People Matter Fest. Two city commissioners who helped organize the event are calling for a 24-hour cease-fire while families enjoy a father-son basketball tournament, a DJ battle, food trucks, local vendors, and art exhibits. 1 p.m. Saturday at Athalie Range Park, 525 NW 62nd St., Miami; peoplematterfest.com. Admission is free with RSVP via peoplematterfest.eventbrite.com.

This week at Vizcaya Village, the Processional Arts Workshop (PAW) will present Bloom: A Twilight Performance. No cell-phone activity will be allowed as they present the story of this venue through illuminated lanterns and mobile projections. 8:30 p.m. Saturday at Vizcaya Village, 3250 S. Miami Ave., Miami; 305-250-9133; vizcaya.org. Admission costs $10.

Jai alai, touted as the fastest sport in the world, is a point of pride for South Floridians. And though Miami's psych foursome Jaialai might not be slamming the fastest tunes, it has adopted the name of the town's beloved sport. The group will celebrate its new EP, When I'm on the Run, three days after its June 14 release at the enchanting downtown bar and event space 1306 Miami. Jaialai will perform alongside Heavy Drag, Private School, and DJ David Rondon. 9 p.m. Saturday at 1306 Miami, 1306 N. Miami Ave., Miami; 305-377-2277; 1306miami.com; facebook.com/pg/jaialaiofficial. Admission is free.

Click "next" for more things to do in Miami this week.