So far, 2017 has been a year of big openings and bigger expectations on Miami's restaurant scene. The SLS Brickell illustrates the trend via new offerings from both Spanish superchef José Andrés and local hero Michael Schwartz. Then there's Kris Wessel, whose short-lived Oolite and beloved Red Light Little River still linger on our palates as we await his forthcoming Caribbean barbecue spot. Meanwhile, new projects from chefs Jeremy Ford, Jeff McInnis, and Norman Van Aken are in the works.

By contrast, the best restaurants New Times reviewed during the first months of 2017 are mostly small scale and overseen by names you might not know. They offer Mexican, Filipino, Thai, and Chinese fare. One is both old and new — a second outlet for a wildly popular oyster restaurant in a classic North Miami location. Another, in the unpredictable South of Fifth neighborhood, is a pricey-but-worth-it masterpiece by a Philadelphia culinary genius and friends. 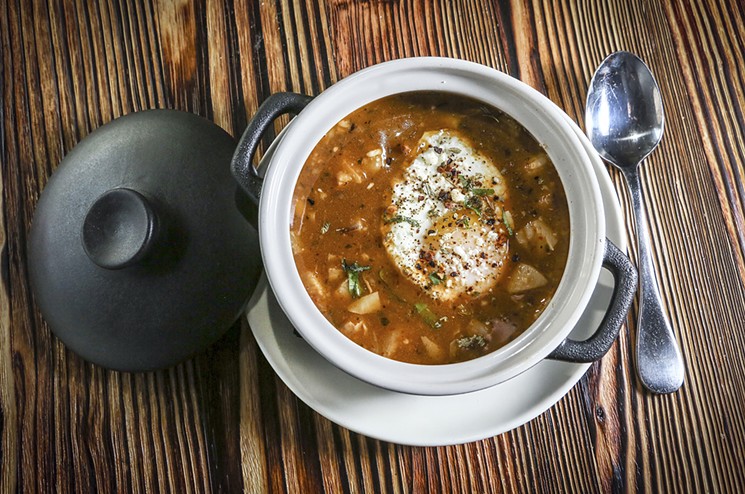 Olla (1233 Lincoln Rd., Miami Beach; 786-717-5400): This dim Lincoln Road haunt that once was home to Simon Stojanovic's pristine seafood has been taken over by Coyo Taco kingpin Scott Linquist and transformed into a tribute to Mexico. His menudo ($12) starts as a tomato-tinged brew spiced with Mexican oregano and guajillo chilies. A long simmer with cow, chicken, and pig feet fattens the broth. With a fried egg and a basket of warm, flaky tortillas, the soup packs luxury and modesty into each bite. This recipe and others come from the decade Linquist spent as executive chef at New York's Dos Caminos and his travels through Mexico. In Miami, he serves glass jars filled with what you might call Mexican bar nuts: roasted grasshoppers (called chapulines), slivered Marcona almonds, cucumbers, and avocado ($8). He also delivers savory, slightly gamey lamb tartare ($12), delicately seasoned with shallots and capers and then fattened with a quail egg. Soft planks of corn dough called sopes ($9) are decked out with sweetbreads offering crisp exteriors and rich insides enlivened with radish matchsticks and a punchy serrano pepper salsa. This is one trip to Mexico you'll want to take again and again. 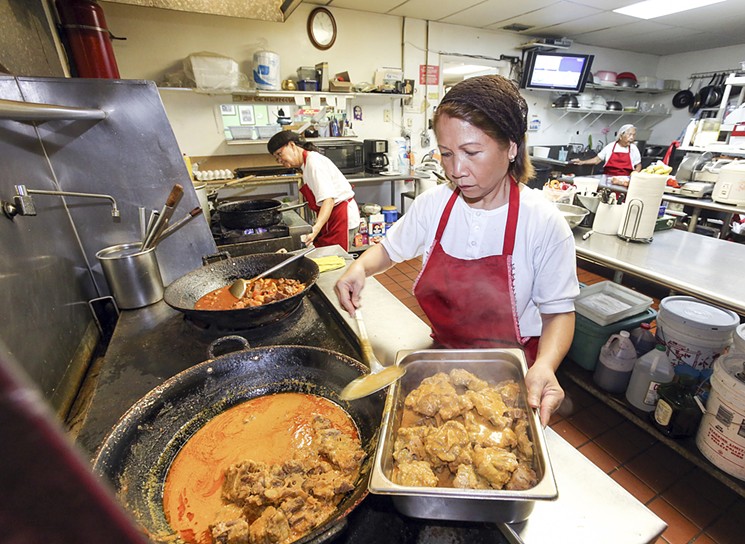 Pampangueña (18623 SW 107th Ave., Miami; 305-278-0560): When 57-year-old Elsa Burger began cooking in earnest a decade ago, her mother imparted the most important lessons. Hence, the pork blood stew ($6) at Burger's Pampangueña is like a sour Filipino version of the finest pasta carbonara. The key is to quickly stir the blood into the hot vinegar with sizzling garlic and ginger. That transforms it into a velvety emulsification that glosses over rich hunks of pork shoulder. Today South Florida's far-flung Filipino community flocks here for a traditional breakfast such as fried milkfish ($5), marinated in vinegar, crisped, and served with rice and eggs. The best part is the belly, with a pinkie-width cylinder of fat sandwiched between oily flesh and crisp skin. The sour delights continue at lunch in a soup called sinigang ($5), filled with pork shoulder and heaps of radish, bok choy, and green tamarind. Just show up early: The afternoon crowd doesn't wait till noon.

Cake Thai (180 NW 29th St., Miami; 305-573-5082): Miami's reliable Thai food options grew to two (the first being Panya Thai) when Phuket Thongsodchaveondee, better known as Cake, opened his own restaurant in a decrepit hole-in-the-wall on Biscayne Boulevard. It got even better with his eponymous Wynwood restaurant. Here, you'll find kaprao moo krob ($20), a spicy, tangy amalgam of ground pork belly or duck, depending upon the night, sautéed in a salty blend of chili and garlic that coats a starchy, barely sweet heap of sticky rice. Jiggly flat rice noodles combined with chicken thighs, bits of springy cuttlefish, salted cabbage, and house-made sriracha sauce fill out the dish he calls kua gai ($16). And Cake's green curry ($24) arrives as a mound of fork-tender short ribs doused in a pungent sauce that also clings to snappy Thai eggplants and a ginger-like tuber called finger root. The chef's favorite dish is kway teow tom yum ($16), a pork noodle soup he learned to make from his father. It's laced with a paste of peanuts, roasted bird's eye chilies, fish sauce, and lime juice. It's the taste of home for the chef but likely unlike anything you've tasted before.

Chinese Guy (10340 W. Flagler St., Miami; 305-227-3111): Florida International University and the University of Miami's relentless pursuit of Chinese students has had a happy side effect: the proliferation of traditional northern Chinese restaurants. Chinese Guy, owned and run by husband-and-wife team Kun Bao and Yanan Cai, specializes in the fare of Tianjin. The pair hired Fang He, the longtime chef of nearby Lung Gong, to oversee a menu that includes slender shreds of braised pig ears doused in ripping-hot chili oil ($7.95). Buttery lobes of tilapia ($11.95) are poached with wood ear mushrooms, leaving the pearly-white flesh soft and floating in a pool of seasoned oil punched up with a hint of rice wine. The delights continue with corn and pumpkin cubes fried in rich, salty duck egg batter ($12.95), sticky pig trotters braised in sweet soy, or a heap of meaty rib tips perched atop sticky rice ($8.95). His speciality is the Yangzhou meatball ($14.95): mandarin orange-size spheres that begin by pulverizing beef, egg whites, and a touch of water with a mortar and pestle until a delicate, fluffy paste emerges. 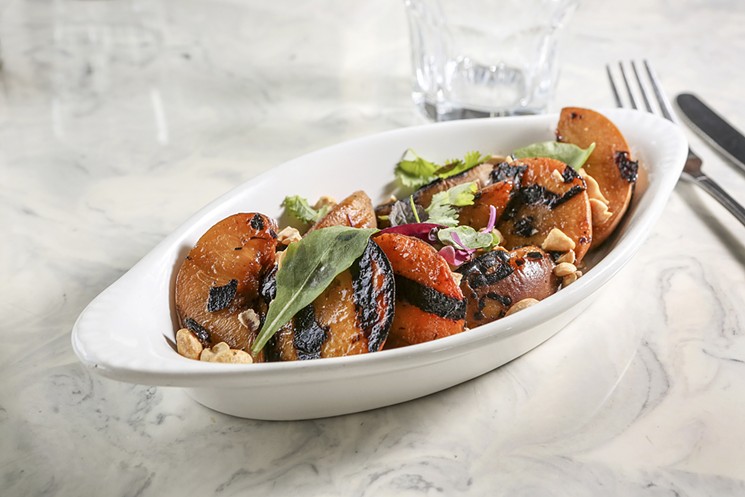 Mignonette Uptown (13951 Biscayne Blvd., North Miami Beach; 305-705-2159): The outpost of Danny Serfer, Ryan Roman, and Josh Burman's Mignonette took over a hallowed space in North Miami where the Gourmet Diner once plied affordable French bistro fare in a vintage space. Wisps of its charm have been spruced up with gold leaf and auburn leather and even appear on the menu in the form of lamb meatballs ($15) and branzino ($29) with a fennel-potato hash. For the rest, find a bounty of simply prepared fish paired with Serfer's beloved vegetables; fancier, more ambitious plates; and oysters galore. But it's the brunch that makes the uptown location worth the schlep. The brunch tower ($49) presents Durham's Tracklements smoked salmon, sable, fish dip, and salmon roe on a bed of ice with capers, tomato, red onion, and cream cheese. Latkes ($9 to $15) with a buttery hollandaise-smothered poached egg can be "clawed" (with Maine lobster), "pinched" (with crab), "koshered" (with lox), or "fancied" (with caviar). Moreover, you're close enough to the home of that relative you've been avoiding for the past few months, and nothing smooths out a rough patch like bagels and smoked fish. 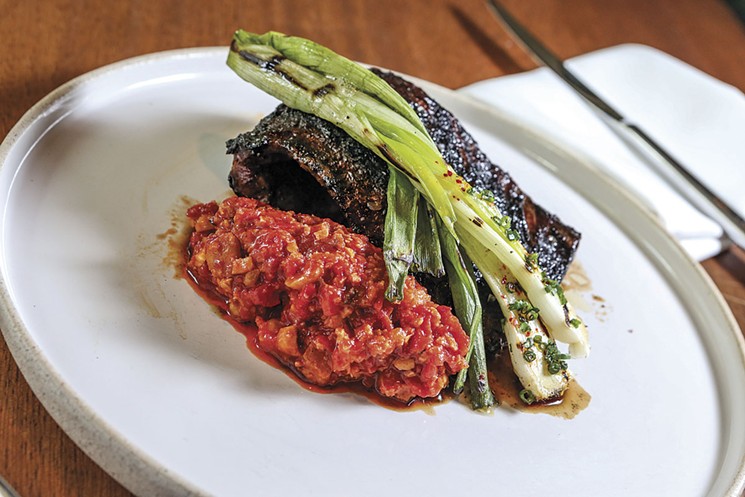 Upland (49 Collins Ave., Miami Beach; 305-573-5550): Unlike so many restaurants in Miami Beach's South of Fifth neighborhood, Stephen Starr and Justin Smillie's Upland is an ingredient-centric haven that trades pretense and faux style for familiar comforts with unexpected jabs of flavor. Take the cioppino ($37) for example. The classic West Coast seafood stew is filled with clams, red shrimp, mussels, and a heap of the fermented Korean chili paste called gochujang, which sets it alight. The flurry of horseradish grated over the hulking short rib is an ingenious way to cut the beef's rich fat. The estrella pasta ($21), enriched with chicken livers and madeira, is like your bubbe's chopped liver on meth: crazy. A wild branzino ($72) is brined for three hours and slathered in a mixture of green chilies, sugar, and smoked salt. It's then roasted over high heat until crisp and the smoky flesh slips off the bone. And there's no better way to end the evening than with an order of refreshing grapefruit-flavored Italian ice ($10) nestled inside a pink grapefruit shell and garnished with orange zest soaked in Campari.