Vizcaya's Mermaids Are Slowly Dissolving Into the Sea

Photo courtesy of Vizcaya Museum & Gardens
Across the Caribbean, stories of strange things in the water are told. Perhaps the most famous creature in these age-old legends is the mermaid: a being whose enchanting arias were harbingers of death for sailors.

With these fantastical figures in mind, the great American sculptor Alexander Stirling Calder journeyed to South Florida 100 years ago, envisioning the statues he'd erect at an emerging mansion on Biscayne Bay named Vizcaya. Calder, a Pennsylvania native who studied under the renowned artist Thomas Eakins, was commissioned by James Deering, the owner of the palatial estate, to imbue the property's breakwater, a monumental limestone block in the shape of a barge, with an otherworldly aura.

From 1917 to 1919, Calder, nearly 50 years old at the time, labored beneath the hot South Florida sun, pounding rock with a chisel, slowly shaping the limestone into the form of mythical sirens. When the barge was finally completed, Deering, along with his ménage, would take gondolas to the stone ship, which was a literal dreamboat. Lush with trees and a flowering gazebo, the barge was the site of the millionaire's fairy-tale-like parties. 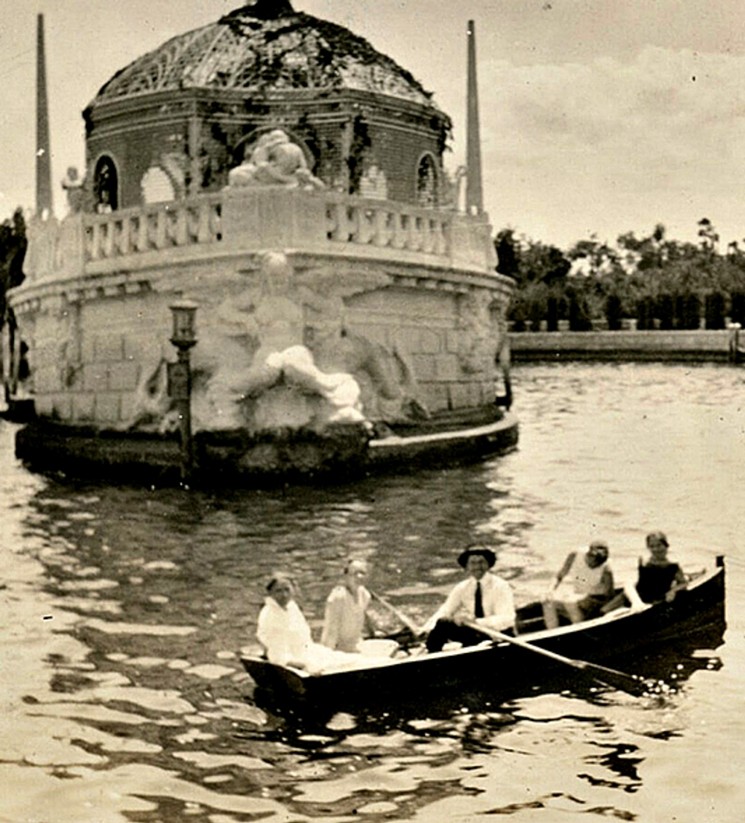 Courtesy of Vizcaya
For a century, the mermaids have gazed at their refined reflections on the water's surface. But over the years, the statues have changed. Enveloping their bodies, like leprosy, are wound-like lesions. Erosion has slowly rotted them. Entire chunks of their bodies have sloughed off.

The tragedy lies in the material with which they are made. Limestone is a notoriously soft rock. And unlike Calder's other sculptures, such as Star Maiden in the Oakland Museum and Scratching Her Heel in the Metropolitan Museum of Art in New York, the mermaids — and their sibling creations on the stationary ship — have been vulnerable to the elements, including savage assaults from hurricanes.

This steady dissolution of the limestone into oblivion is an artistic nightmare. The mermaids have not only quietly imbued Miami with an aesthetic sensibility for decades, but also connected the Magic City, which for a long time was a dream nestled in the swamps of Florida, to the pantheon of great American artists.

However, the sirens might not be doomed after all. In an effort to preserve the sculptures, the staff at Vizcaya Museum & Gardens is using technology to save Calder's masterpieces on the bay.

"The Barge was built 100 years ago, both as a distinguished architectural feature and as a breakwater — and it has served Vizcaya well in both these capacities," says Joel Hoffman, the executive director of the museum. "In an effort to preserve this iconic element and better understand how it has evolved over time, Vizcaya is working with the University of Florida’s Historic Preservation Program on a 3D documentation project that uses laser scanning and photogrammetry to capture the barge in the fullest detail possible."

The 3D documentation project, which the Knight Foundation awarded $100,000 this month, will not only allow visitors to explore the barge via virtual reality, but also help uncover the barge's secrets, including the former glory of the mermaids, to help the museum's employees with future maintenance work.

"This technology will also allow Vizcaya’s conservation staff to compare the current condition of the barge with records and photographs taken during its construction and use this data to preserve the barge for the enjoyment of visitors for generations to come," Hoffman says.

Though the sculptures can be restored, some might say they're better left alone: Their aged appearance seems fitting within with the Old-World ambiance of Vizcaya. But the mermaids aren't just deteriorating due to violent storms and the passage of time. There is another problem, and it's one with lasting, Atlantean effects.

"Sea-level rise is a serious concern for the entire South Florida community," Hoffman says, citing growing scientific evidence that the Atlantic is slowly rising. "We do not question that sea-level rise is a deeply worrying threat."

One hundred years from now, experts say, the mythical sculptures will be almost entirely submerged in the bay. If their form isn't preserved in virtual reality soon, they could become another treasure lost along Florida's coastline.