Photo by CandaceWest.com
The kitchen is abuzz before the lunch rush.

It's an early weekday morning, and Elsa Burger presides over the kitchen at Pampangueña with a wide smile and chestnut hair that falls to her shoulders. Her white shirt is covered by a red apron with an "I Love Herbalife" pin affixed to the strap.

The short 57-year-old Filipina stir-fries ginger matchsticks with garlic and onions in a wok until their fragrance fills the kitchen and begins wafting out into the attached market. Then she tosses a bright-orange heap of calabaza into the hot oil. Each cube soon forms a golden crust. Finally, she throws in a can of coconut milk and a handful of skinny, tannic Oriental green beans that are sweeter than the usual legumes.

In another wok, chicken skin and thighs sizzle in that same combination of garlic, ginger, and onion. They hiss and release the rich smell of fat into the air. Once the chicken is crisped, the pan is flooded with broth, a tub of tomatoes, and tamarind pulp; that last ingredient gives this dish, which is called sinampalukan, its unmistakable sweet-sour taste.

In a matter of hours, the two dishes will join a half-dozen others on a steam table that sits deep inside this lunch spot and market, where you can also buy skin-whitening cream, glutinous rice, multiple Filipino varieties of Spam-like meat, shrimp paste, and jarred tropical fruits. Over the past two decades, Elsa and her sister Josie Relism have turned this spot in a nondescript gray industrial strip mall just west of Cutler Bay into a pilgrimage site for South Florida's Filipino community. Many drive from as far as Orlando and the Keys for a taste of home on a plastic plate.

For the full experience, she advises eating lots of rice and enjoying it all with your hands.

"When you migrate to a Western country, you're going to feel like an outsider, so having the food you were raised with helps," says Romeo Arellano, a 40-year-old paramedic who gets his annual fix around tax day when he makes the trek from Vero Beach to Kendall to visit his accountant. Sitting at one of the three tables jammed inside the market, he surveys a feast that could feed three. He'll devour it within a half-hour.

First up is fried bangus, which is known as milkfish in English. The stubby tropical species is marinated overnight in vinegar, fried crisp, and served with white rice to make for the consummate Filipino breakfast. For the full experience, Josie advises eating lots of rice and enjoying it all with your hands. The best part is the belly, with a pinkie-width cylinder of fat sandwiched between oily flesh and crisp skin. It's the kind of fat that leaves your lips sticky but also helps pare back the vinegar's intensity.

That same phenomenon is also apparent in Romeo's bowl of pork sinigang. The soup starts with a tall stockpot brimming with water, vinegar, and fatty hunks of pork shoulder. Once it comes to a boil, Elsa skims off the foam, then plops in heaps of radish, bok choy, and green tamarind. After an hour or so, the soup is ready, and its broth has the tackiness of a half-finished tonkotsu ramen with a hefty dose of vinegar. Though the souring agent can be overbearing on its own, it's indispensable when you fill a spoon with a bit of starch and a hunk of fatty pork.

Elsa and Josie were born in the province of Pampanga (women from the area are called Pampangueñas, hence the eatery's name) in Luzon. The region sits on the Philippines' largest and northernmost island and is known throughout the country for its particularly sour food. Their father died shortly after they were born, leaving their then-35-year-old mother and her eight children to fend for themselves.

"My mom had to work two jobs, so our older sister Virgie took care of us," Elsa says. Only one of the children, Josie, finished high school. The others quit after the Filipino equivalent of elementary school and began working to help the family survive.

"Most of my siblings went on their way and got married at 16 or 17," Elsa explains.

After a year of high school, she left Pampanga for Manila to look for work. For six months, she assembled watches. After that, she worked in a bakery and at nights slept hidden in the kitchen above it. Eventually, she moved back to Pampanga, where she got a job as a nanny for an American soldier and a Filipino woman who had adopted a baby. That was how she met Paul, an American staff sergeant whom she eventually married and followed to the United States. The couple lived in California and Oklahoma before settling in Florida, where Josie was living with her husband, also a veteran, near Tampa.

The sisters' reunion allowed Elsa to taste the food her mother and older sisters used to prepare every day when she was a child. "Anytime there was a three-day weekend, she'd call and say she's on the way," Josie laughs.

Josie later divorced and moved to Miami to live with Elsa. Though Josie worked as a Winn-Dixie cashier and Elsa in a children's daycare center, the two spent nights and weekends clouding their home with the scent of Filipino cooking. Their break came when a friend got them work catering lunches for a nearby company, though they were soon in over their heads.

"It was for something like 500 people. We had no idea what we were doing," Elsa says. "We would cook everything in Josie's garage, pack it up, then drive it over to the office."

It was the memories of watching her mother butcher a whole pig inside their home that gave Elsa the self-confidence to do it. "She would bring this huge thing into the kitchen, and almost instantly it would be taken apart and turned into several dishes," Elsa says of her mother.

The most memorable dishes were dinuguan and sisig, also known as pork blood stew and stir-fried pig face. For the stew, pieces of pork are marinated in vinegar, salt, garlic, and bay leaves. Next the blood is very gently heated and, as it warms, the pork and its seasonings must be quickly stirred in. The process creates a rich, not too iron-tasting emulsion that rivals hefty soups like Greece's avgolemono and New England's clam chowder. 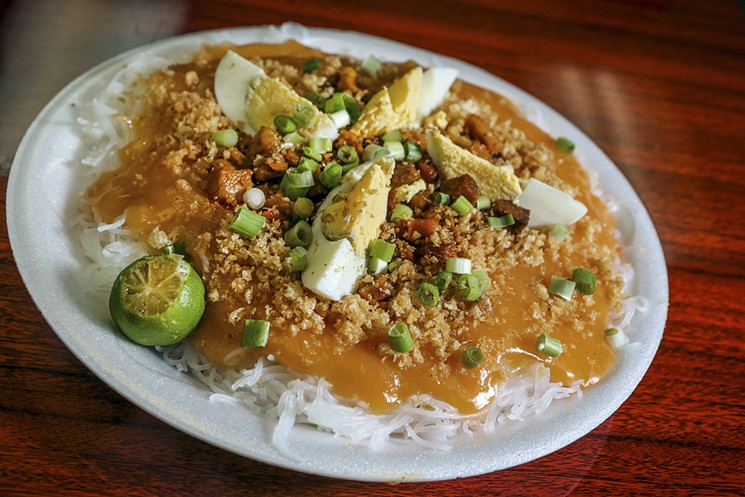 "Mom taught us to do it with two people," Elsa explains. "That way the blood doesn't burn and ruin the taste."

There was menudo, an orange-red soup made with bits of pork, pig liver, and hot dogs stir-fried in onions and garlic and then cooked down in tomato sauce with bay leaves, sugar, and soy sauce. It's on the menu every Thursday at Pampangueña. The pig was also turned into heaps of pork adobo, for which garlic and ginger are burned in a blend of vinegar and oil before hunks of meat are tossed in and fried in the concoction.

Both make regular appearances on Pampangueña's lunch rotation. Though Elsa says the rush starts around noon, shortly after 11 a.m., a half-dozen people are already eyeing their lunch. Elsa emerges from the kitchen with one final dish, paksin, which also contains milkfish, this time boiled in vinegar with ginger and bitter melon.

"OK, who's first?" she calls out in Tagalog.

Meanwhile, Romeo, the paramedic here for his annual taste of home, slurps up the last bit of his pork sinigang and lets out a satisfied sigh.

"Filipinos, because they've faced a lot of challenges as immigrants, are very tight-knit," he explains. "If you're Filipino and you start a business, it won't be long until everyone finds you."