The Ten Best Tacos in Miami

Photo by 52 Chefs
The Wolf of Tacos served his street-style tacos at SOBEWFF. Now you can taste them at his weekly pop-up.
When it comes to infinite variations and regional styles of Mexico’s beloved street food, let's face it: The West Coast reigns supreme.

But second to Cali is Miami, where our Latin influence offers its own rainbow of culture, flavor, and flair. And with an ever-expanding food scene, our taco takeover only continues to grow.

These days, the Magic City practically overflows with taco takes — an ambitious mix of menus that range from modern Mexican iterations and under-the-radar mom-and-pop taquerias to street-style taco pop-ups and Instagram-famous chefs.

So grab an ice-cold cerveza or a refreshing margarita and let’s taco 'bout this alphabetical list of the best tacos in the 305, where taco time is truly all the time. 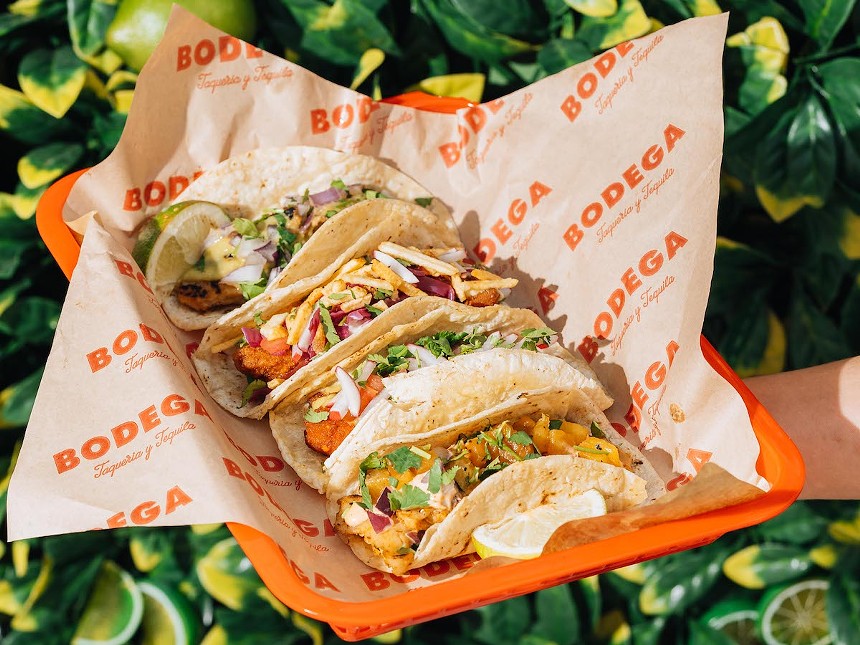 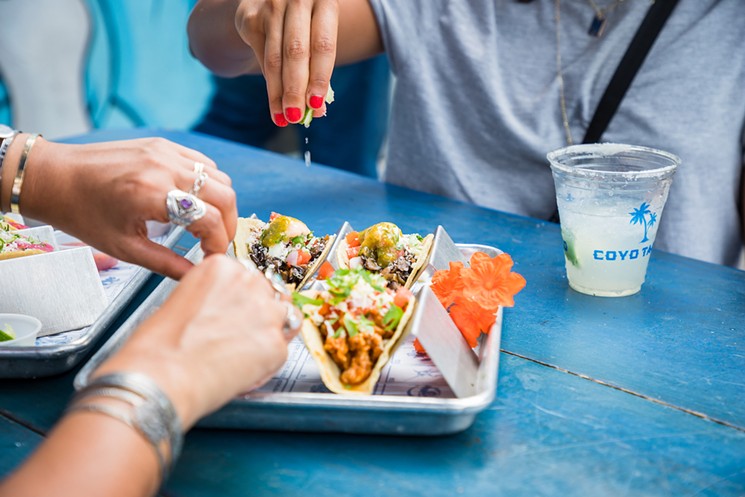 Coyo Taco, a Wynwood favorite (and a zillion other neighborhoods, too)
Photo by Deyson Rodriguez

Multiple area locations, including:
2320 NW Second Ave., Miami
305-573-8228
coyo-taco.com
Coyo Taco is a taco empire, with five South Florida locations at last count, plus outposts in Panama, Portugal, Paris, and the Dominican Republic. The menu is replete with taco choices (two per order), from Gulf shrimp to seared Angus steak, which you can choose to convert into a burrito, salad, or burrito bowl. After a night of drinking and dancing, treat yourself to hand-pressed tortillas filled with crispy duck and serrano salsa, then finish off your meal with an order of churros. 3120 Collins Ave., Miami Beach
786-496-5739
hojataqueria.com
For a hearty dose of taco mystique, head to Hoja Taqueria at Generator Miami, a boutique-size shop that offers a unique take on traditional Mexican food via classic dishes like quesadillas, burritos, and (of course) tacos. The menu focuses on giving Miamians an authentic taste of Mexico by paying respect to one of that country's most precious ingredients: corn. Here the tacos are served on corn tortillas made in-house using masa from corn sourced directly from a dozen family-owned farms in the state of Oaxaca in southern Mexico. Additional Mexico-sourced ingredients include chilies and genuine Oaxaca and Chihuahua cheeses. The feel-good moment after that taco goodness hits your belly? Knowing a portion of Hoja Taqueria’s profits go directly back to the farmers to create a supportive and sustainable farm-to-table cycle. 201 NE 82nd St., Miami
305-906-1149
lasantataqueria.com
They say the quickest way to get from Miami to Mexico City is via La Santa, chef Omar Montero's Little River taco shop. Born as a food truck in 2017 and quietly reimagined as a brick-and-mortar restaurant during peak pandemic lockdown days, Montero's La Santa has emerged as a hotspot for those seeking some of the Magic City's best tacos. Meat options — whether familiar al pastor or more exotic triple-decker campechano — are uniformly stellar. But so are Montero's off-the-beaten-track seafood and vegetarian options, like his softshell crab, wild mushroom, and sweet potato versions. 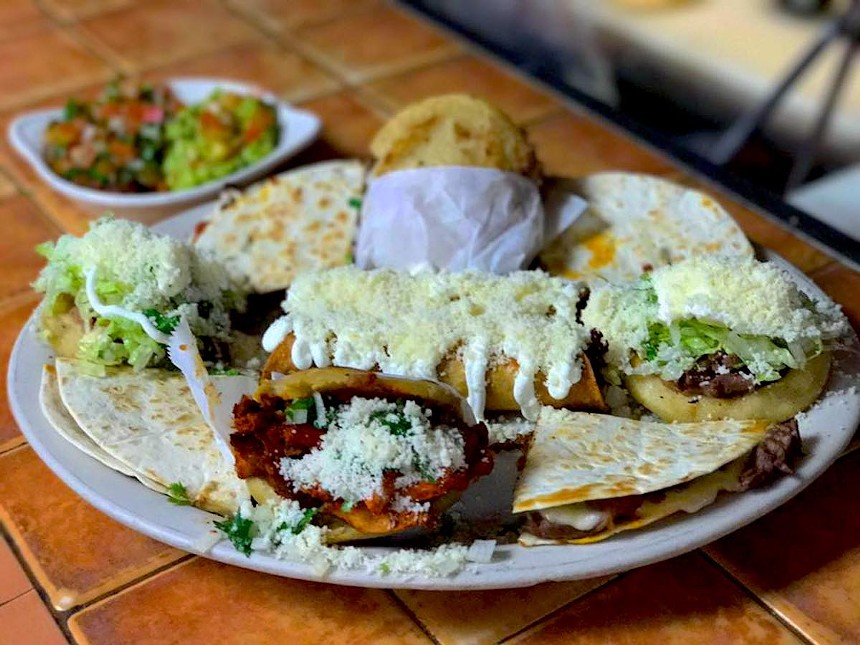 1961 SW Eighth St., Miami
305-644-4015
mirinconcitomx.com
A Little Havana mainstay since 2005, Mi Rinconcito Mexicano boasts a south-of-the-border cantina ambiance from the simple décor to the no-frills Mexican fare. Take it easy on the complimentary tortilla chips and red salsa or you won't have room for the menu’s stars: the tacos. Soft corn tortillas come with your choice of pork, lamb, tongue, chicken, or chorizo and are packed with onions and cilantro. Request a fiery hit of hot sauce for an extra kick. 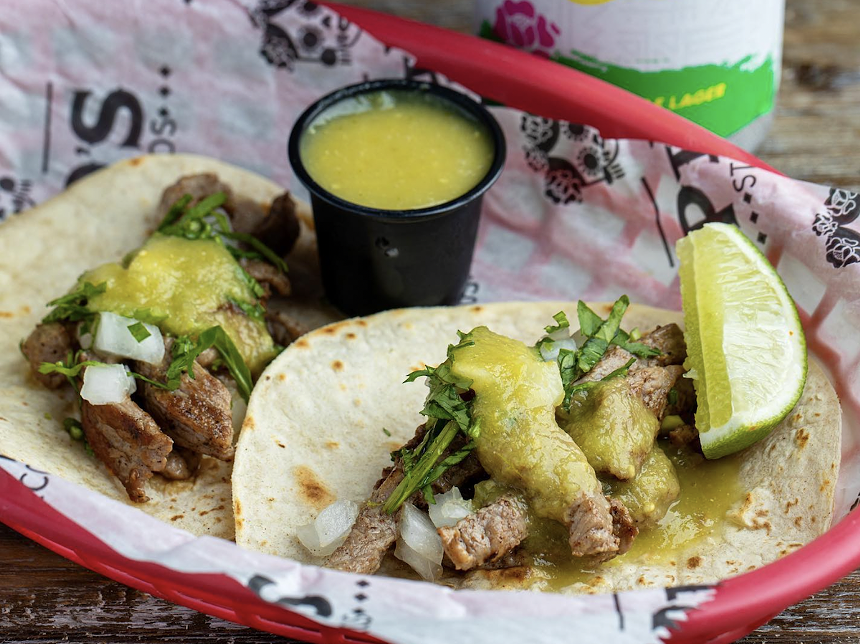 158 NW 24th St., Miami
305-706-8226
pilostacos.com
Since opening its first location in Brickell, Pilo’s Street Tacos owner Derek Gonzalez has been on a mission: to operate a company employing people with intellectual and developmental disabilities while offering Miami his take on affordable street tacos. He does both at his original establishment (28 SW 11th St., Miami) and a Wynwood outpost and tequila garden where you can find the "El Pescadito" tacos (grilled or beer-battered fish with red cabbage, pineapple pico de gallo, and smoked chipotle mayo on flour tortillas) and the vegetarian-friendly "El Tizando" tacos (mushrooms al pastor, white onions, cilantro, and pineapple on corn tortillas). And don't ignore the signature "La Pilo" tacos, served two per order for $10. Gonzalez says they evoke memories of his favorite Mexico City taquerias and swears the combination of pork al pastor, pineapple, white onion, and cilantro is as close to the real deal as you'll get in Miami. 2516 SW Eighth St., Miami
305-300-5597
taqueriavivamexicomiami.com
Taqueria Viva Mexico's menu is short and sweet: tacos filled with a variety of pork parts — think ear, stomach, skin, and tongue — that have been braised in their own fat and flavored with nothing but diced onion, chopped cilantro, and a squirt of citrus juice. The simplicity allows you more time to eat and less time spent trying to figure out what to order. Try the campechano, a combination of tender pork leg and crackling pork skin, for a delicious combination of flavor and texture. 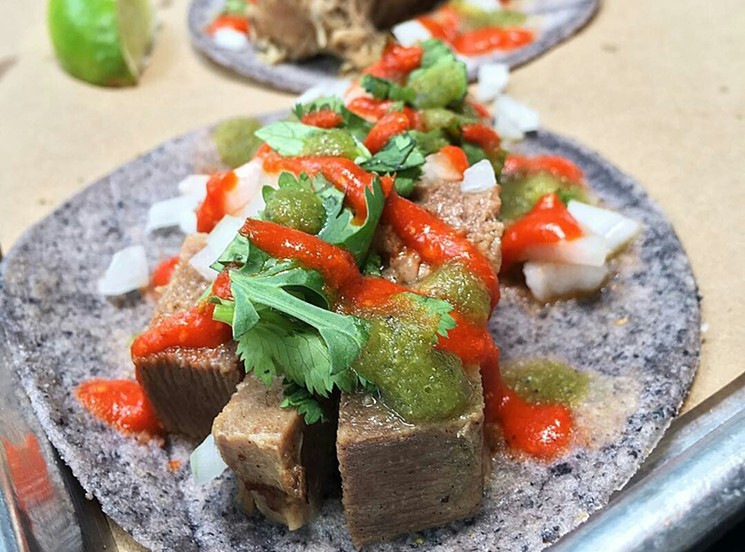 1351 Collins Ave., Miami Beach
305-203-2197
and
7450 Ocean Ter., Miami Beach
786-588-4755
taquizatacos.com
There’s only one way to eat Taquiza’s tacos,  made with homemade nixtamalized heirloom blue corn tortillas. You simply pick up the taco, fold it, and fit as much in your mouth as humanly possible. Savor every variety, ranging from al pastor and Impossible chorizo to chapulines and lengua, and you'll see why chef/owner Steve Santana’s taquerias remain at the forefront of Miami’s taco revolution. 6600 Biscayne Blvd., Miami
305-960-7117
uptown66.miami
in the MiMo District When chef Nuno Grullon signed a lease for a ventanita on the corner of 66th Street and Biscayne Boulevard, he and his business partner Akira Van Egmond saw great potential for the tiny former coffee stand. They set to work renovating the tiny space in the MiMo District and transforming it into Uptown 66 Taqueria. Here, Grullon's concise menu of tacos are made with hand-pressed tortillas made from heirloom Oaxaca corn. The Bronx native studied Mexican cooking techniques, but the delivery is all his own, from pollo asado (with pickled carrots, radish, crema, and cotija cheese) to slow-braised barbacoa (oxtail, beef cheek, and short rib) to suckling-pig carnitas with cabbage and onion. Don't miss the birria tacos, served two per order for $10, which arrive with a sidecar of slurp-worthy consommé. 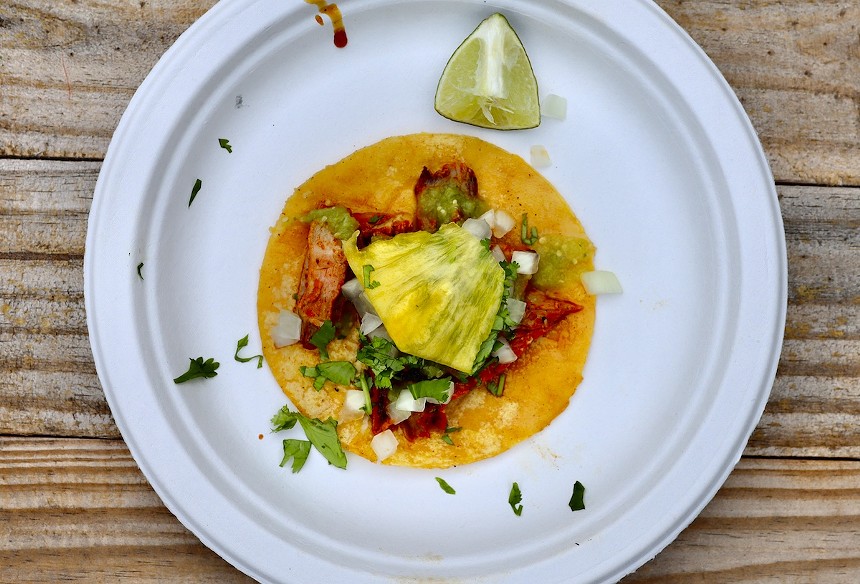 The Wolf of Tacos

Various locations
instagram.com/thewolfoftacos
Wolf of Tacos chef/founder Eduardo Lara went from hosting pandemic pop-ups in his driveway to serving hundreds of people at the 2021 SOBEWFF. Now the young chef's real-deal street tacos are all the rage in the Magic City, and ground zero for hardcore taco fans looking for a taste of true tacos al pastor. For Lara, tacos are sacred — no fancy-pants ingredients or upmarket toppings for him. Think simple and messy: fat-slicked slivers of meat shaved directly from the trompo and piled onto a single corn tortilla. That philosophy applies across the board, each variety finished with homemade salsas and served alongside traditional crudités. Versions include suadero (a thin cut of beef from between the belly and the leg), longaniza (sausage), and campechano (a combination of several meats, usually beef and pork, in one delicious package), as well as a savory vegan oyster mushroom cooked till it exhibits a meatlike texture and flavor. These aren't elevated tacos. They aren't fancy. They're just damn near perfect. Check Lara's Instagram to find him cooking alongside chefs Janise Guyot-Cabana and Pablo Reyes at pop-up events across Miami.