Laine Doss
You want this guy to give you a drink — and a nightmare.

It's last call for the 2017 South Beach Wine & Food Festival. Today it's back to reality after spending five days eating and drinking. And though most of us are slightly hung-over and hoarse from shouting, "rosé all day," it's time to look back at the winners and losers of the festival.

Courtesy SOBEWFF
José Andrés' Immigrant Story
José Andrés was honored at Saturday evening's Tribute Dinner. The chef — who closed his D.C. restaurants last week to show solidarity for the Day Without Immigrants and also refused to open an establishment at D.C.'s Trump Hotel after the Donald delivered various rants against Mexican immigrants — took to the stage. Instead of giving the usual thank-you speech, Andrés took off his chef's coat to reveal a shirt that read, "I am an immigrant," turning the $500-a-plate dinner into a positive statement that backs so many members of the culinary community. The festival's motto — "Eat. Drink. Educate." — was never truer than at that moment.

Laine Doss
Art of Tiki
SOBEWFF's wildest event had to have been Friday's Art of Tiki, where the nation's best tiki bars competed to win by any means necessary. And the bars brought out the big guns: pirates, bearded hula girls, voodoo zombies, and real scorpions. The real winners of the evening? The attendees, who witnessed Robert Irvine give a big shout-out to the military and sipped creative cocktails. For $95, Art of Tiki continues to be the best bang for your buck.

Laine Doss
Vote for Pincho
Burger Bash's people's choice award is a big win for any restaurant participating in Burger Bash, and Pincho Factory was in it to win it. Pincho's partners set up their own campaign — complete with signage. The cleverest of the lot? The nod to Napoleon Dynamite's Pedro and his lust for the school presidency.

Laine Doss
Luchador for a Day
At Tacos After Dark, the tequila flowed and the tacos were spicy. After a few margaritas, it was time to get in a fight — simulated, of course. Luchador masks and silk robes were set up so guests could take photos as Mexican wrestlers. Best selfie op of the festival, hands down. 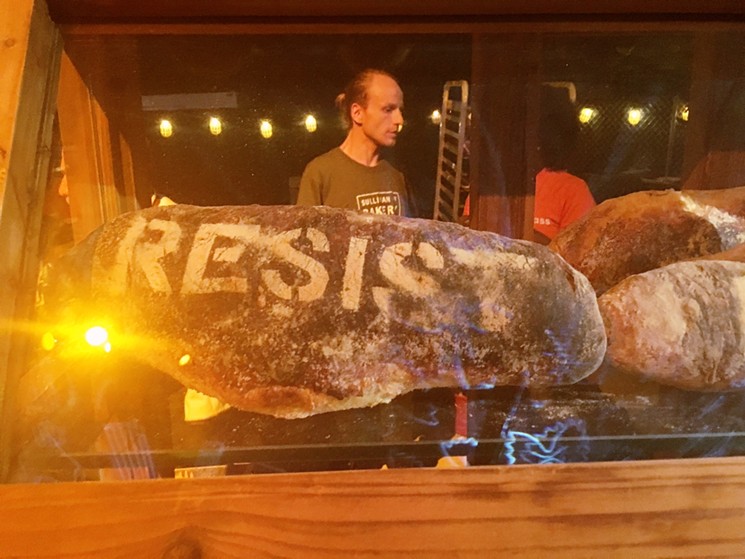 Laine Doss
Sullivan St. Bakery Is Finally Opening
It's been two years since Jim Lahey announced he would bring Sullivan St. Bakery to Miami's Little Haiti neighborhood. And according to bakery representatives at the festival, it'll finally open this spring. Guests at the Grand Tasting Village and Italian Bites on the Beach were treated to a sample of things to come in the form of focaccia and crusty, flavorful breads.

See the next page for the SOBEWFF losers...