Bowls of tripe stew and plates of cow-head tacos were just what Scott Linquist and his crew of hung-over cooks needed. About a half-dozen of them were visiting Jalisco, the Pacific Mexican state believed to be the birthplace of mariachi music, on a culinary research expedition. One night, a local distiller invited them to taste his company's wares. Yet rather than find themselves in a nondescript factory, they wound up at the owner's lavish hacienda, where they pounded the stuff until the wee hours.

When the night was over and daylight finally crept into their hotel rooms, they stumbled into the streets of Amatitán, a dot of a town about a half-hour drive northwest of Guadalajara. It didn't take long to find a rundown shack engulfed in steam pouring off a vat of the stew called menudo. It was filled with tripe and fatty squiggles of slow-cooked cow feet.

"As chefs, you find this and say, 'Holy shit, this is exactly what I want to eat,'?" Linquist recalls.

That offal-filled hangover cure is tucked into an extensive menu that draws from all corners of Mexico inside Linquist's 105-seat Olla, which the 50-year-old opened on the far west end of Lincoln Road in South Beach this past November. The tomato-tinged brew is gently spiced with Mexican oregano and guajillo chilies. A long simmer with cow, chicken, and pig feet fattens the broth. With its gelatinous bits of trotter meat and cow stomach, a fried egg, and a basket of warm, flaky tortillas, the soup packs luxury and modesty into the same bite.

"We'd make cochinita pibil in the jungle and drink warm mezcal straight out of the still."

Such subtle sophistication comes from this heavyset chef who sports silver hair and was raised in Covina, a suburb of Los Angeles. Nearby, Linquist says, is a town called La Puente that boasts a large Hispanic population and the plethora of bare-bones Mexican joints that flavored his childhood. There was even more Mexican fare during family vacations that often began with a drive across the border to Ensenada on the Baja Peninsula, Rosarito, or Tijuana. After graduating from the Culinary Institute of America in Hyde Park, New York, he bounced around kitchens in San Francisco, New York City, and Southern California. His rise began in 2002 when he was hired to run the kitchen at Dos Caminos, a posh Mexican spot on Park Avenue in Manhattan. During the following decade, the restaurant undertook a nationwide expansion, fanning out in New York City before spreading to Florida, Nevada, and California. Linquist took responsibility for kitchens across the country. He departed in 2012, after the company was bought out and pulled back to New York, where today five restaurants remain.

He arrived in Miami two years ago with partners from Mexico City and Miami who leased an industrial space on Wynwood's thronged NW Second Avenue. At the time, a better, more traditional kind of taco was just finding a foothold in Miami. Steve Santana of Taquiza, the Miami Beach taqueria, had just begun turning out his midnight blue tortillas made of house-ground masa from corn supplied by remote Mexican farms.

Linquist had the good fortune to be in the right place at the right time. He also had the right skill set and palate to sate the taco-hungry Miami eating crowd.

"For me, you've got to start with the tortilla, and we hand-press ours," Linquist told New Times in 2014. Though Coyo Taco uses maseca, a prepared corn flour, to turn out its tortillas, the flavor was far superior to the bagged kinds found at Mexican joints across town. What's more, Linquist knew how to tickle the Miami palate without abandoning thousands of years of Mexican culinary heritage. Thus he began offering tacos filled with crisp confit duck topped with biting serrano chili salsa; the corn fungus called huitlacoche dappled with creamy, salty cotija cheese; and grilled shards of cactus topped with quinoa and queso fresco.

Pairs of Linquist's tacos run between $7 and $9. As the avenue became more popular, the lines grew longer. Today the Wynwood Coyo sells thousands of tacos daily. Last year, a Brickell outpost opened, and lately, he and his partners have been scouring locations across the city for a third spot.

Yet such success also hemmed him in. "As a chef, you're driven to do things that define you a little more than just putting out 2,000 tacos a day," Linquist says.

Preparation for that more sophisticated image was honed during the annual, monthlong research trips he and his cooks from Dos Caminos made to Mexico. Each year, he'd travel south from his base in New York City to spend day after day in dusty, remote Mexican villages begging locals to teach him and his colleagues recipes to bring home.

"We'd make cochinita pibil in the jungle in the Yucatán, dig a hole in the ground to make barbacoa, and, in Oaxaca, drink warm mezcal straight out of the still," he says.

Sopes: Creamy inside and crisp outside.
Photo by CandaceWest.com

Linquist first made mole around 2004 alongside Zapotec sisters who ran the restaurant Tlamanalli in the village of Teotitlan del Valle, situated in the scrubby hills above Oaxaca City. Later, he learned to make a charred chili seed mole called chichilo from New Orleans chef Susana Trilling, who on a whim moved to Oaxaca to open a cooking school.

"I vividly remember taking the seeds out of chilies and cooking them until they caught fire, then mixing them into a black mole," Linquist says. "People expect it to be sweet with chocolate, but it actually has a smoky, charred flavor."

He delivers that same sauce at Olla. Among the lard-fried tomatoes, tomatillos, and heaps of roasted tortillas in this Oaxacan masterpiece is the rare chili chihuacle negro. Used as currency in pre-Columbian Mexico, it fetches a whopping $130 per pound online today. Hours after the mole's ingredients are roasted, ground, boiled, fried, and refried, the sauce is draped over tender knobs of short rib and sweet squash that are brightened with a smattering of sprouts.

Of course, all the dishes here are "designed for sharing." Along with mole, there's a quartet of masa-focused dishes. The highlight of these are the sopes. The soft planks of corn dough are decked out with the fried thymus glands called sweetbreads, or mollejas in Spanish. They're creamy inside and crisp outside, with a richness smartly contrasted by radish matchsticks and a punchy serrano pepper salsa.

Glass jars are filled with everything from roasted grasshoppers (called chapulines), slivered Marcona almonds, cucumbers, and avocado to lamb tartare sprinkled with shallots and capers and crowned with a quail egg.

The focus of the menu is the half-dozen ollas, the restaurant's namesake, which loosely translates to "cooking pots." Here is where to find that menudo, which should be accompanied by a cast-iron platter piled with loamy huitlacoche sautéed with shiitake mushrooms, all smartly dressed with slightly spicy toasted garlic, chile de árbol, and the medicinal Mexican herb epazote. 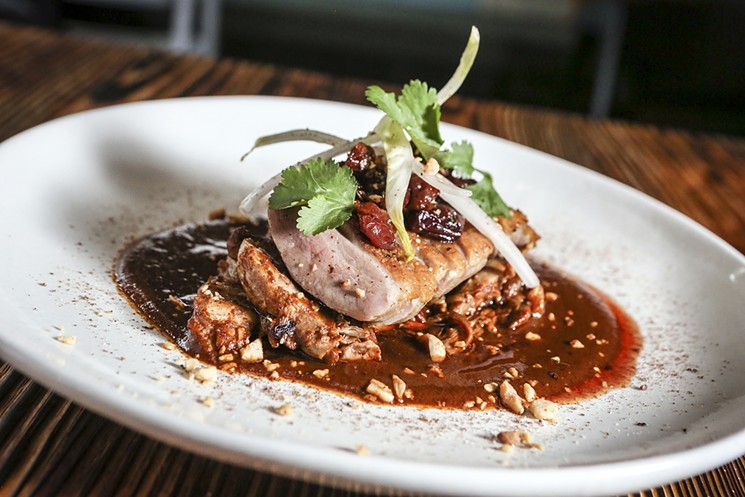 There are sections for larger, more composed plates that on their own suffice as a single entrée. One group, dedicated to the ocean, gives away Linquist's penchant for Veracruz, the Mexican port city on the country's gulf side that served as a main artery for European explorers. Perhaps that was the jumping-off point for almejas, a classic combination of littleneck clams and pork, this time a morcilla whose delicate flavor is sadly lost somewhere between the pickled jalapeños and tomatillo broth. Far better is a plate of cuttlefish, not at all rubbery, that combines well with sweet roasted onions and an herbaceous chimichurri punched up with serrano peppers.

Best to go for the slow-roasted lamb shoulder, a seemingly simple plate that's served with tender fingerling potatoes and a pair of salsas, one infused with tequila and another of smoked pasilla chilies ground with pineapples. Both pair slickly with the fatty, slightly gamy meat.

Of course, the foundation of this dish came from the time Linquist visited Zaachila, another speck of a village beyond Oaxaca City's limits, where each Saturday, crowds gather around a troupe of Zapotec women who at 11 a.m. exhume a banana-leaf-wrapped lamb from a charcoal-and-dirt grave where the meat has just spent hours roasting into supple submission.

"This tiny woman asks if we would like 'toda la carne,' and they mean everything," Linquist says. "We had tongue, ears, eye socket, intestines, liver, brain, and of course the delicious muscle meat, and we went at it like savages."

Perhaps his next project, after the third Coyo Taco is up and running, will take us back to that day.