Photo by Karli Evans
View more photos from FM Festival 2017 here.
Mild temperatures and cloudy skies greeted the crowds Saturday afternoon as they walked onto the sand adjacent to the North Beach Bandshell. By the entrance, a large tent held about a dozen stalls offering food and drinks from top Miami purveyors. About 500 feet south of the large tent stood the only stage.

FM Festival's mission is noble: to elevate festival food while delivering a quality musical lineup. After all the "FM" in the fest's name stands for "Food & Music." For the most part, FM succeeded. With headliners such as Hot Chip, Bomba Estéreo, and Ghostface Killah, the fest was predicted to live up to its promise.

On the food side, Ariete, Fooq's, Coyo Taco, K Ramen, and others hoped to match the quality of the music onstage. Coyo was the most popular stall; it had the most varied menu. And Ariete's chorizo frita sold out hours before the 11 p.m. curfew. The most perplexing offering was K Ramen, which served salmon poke instead of its namesake, which would have been welcome in the postsunset chill.

Amtrac
Photo by Karli Evans
Guest bar programs such as Pawn Broker, Bitter Truth, Gramps, and Julio Cabrera's Daiquiri Truck outnumbered the food offerings. There were so many choices that getting a cocktail was a snap. A favorite was the Employees Only pop-up in the VIP section, which built up the anticipation for its arrival next month at the Washington Park Hotel.

There were no complaints when it came to the music. I arrived just as producer Arthur Baker, who these days calls Miami home, gave the festival a lesson in disco. Amtrac followed with a set that included plenty of his own material, such as "Those Days," and closed with the amazingly cheesy but equally awesome "What Is Love" — made exponentially more famous by Will Ferrell and Chris Kattan in A Night at the Roxbury.

Los Amigos Invisibles
Photo by Karli Evans
Venezuelan band Los Amigos Invisibles finally gave the decks a break and let live music shine, combining styles like funk, salsa, and cumbia that finally got the crowd out of the food tent and onto the sand. It seemed at this point that the FM Festival had reached its peak, with more than 1,000 people, by my estimation, in attendance and several hundred more looking over the fence.

Slow Magic followed. Instead of sitting behind a multitude of controls, he seemed to play up the live-drumming aspect that is a signature at his shows. His neon mask illuminated the dark grounds as the stage lights pulsated behind him. Toward the end of his set, he jumped into the crowd, as he's known to do.

Slow Magic
Photo by Karli Evans
But it seemed the headliner and closing act, Hot Chip, was the group everyone was there to see. For good reason too: This would be the British band's third time playing in Miami and the first time since 2013.

Despite having released its sixth album, Why Make Sense?, relatively recently, in 2015, Hot Chip had a set list heavy on fan favorites. The band kicked off immediately with "And I Was a Boy From School," the track that probably introduced most of the audience to the band. The hits kept coming with "One Life Stand," "Over and Over," "Flutes," "Huarache Lights," and "Ready for the Floor." 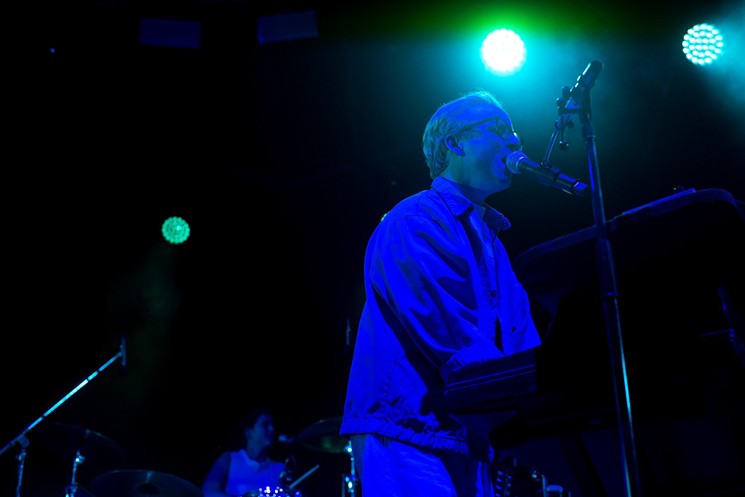 Hot Chip
Photo by Karli Evans
Before launching into "I Feel Better," the band's Alexis Taylor acknowledged that Miami would be the band's only 2017 show and the last until at least a new Hot Chip album is released. The band closed out the show right before curfew with a superb cover of Bruce Springsteen's "Dancing in the Dark" (AKA the one with the video that features a young Courtney Cox).

Musically, FM delivered a strong start to what I hope becomes an annual festival. However, if it plans to live up to its name, more food offerings should be the top priority at next year's edition. There are only so many daiquiris an audience can drink before making regrettable decisions.