Photo by Karli Evans
View more photos from Run the Jewels at the Fillmore Miami Beach here.
The poster for the Run the Jewels World Tour imagines members El-P and Killer Mike as Godzilla-like monsters destroying cities and breathing blue fire. It’s the sort of visual aid any rapper (and his ego) would embrace. However, just four years into the collaboration between the two MCs, it isn’t just bravado; it’s the truth. RTJ has the record sales to prove it.

This past Wednesday night, the duo took the stage at the Fillmore Miami Beach victorious and more confident than ever. The day before, various media outlets reported that RTJ found itself atop the R&B/Hip-Hop Albums chart for the first time with its third LP, Run the Jewels 3. After more than 20 years of grinding, each member had found a modicum of individual success, but nothing like this.

As if to drive that point home, the two emerged from the shadows to the triumphant blares of Queen’s “We Are the Champions.” They were lions surveying their pride and the land that now belonged to them. It might have been difficult to see at first thanks to all the smoke, none of which came from a fog machine.

Almost immediately, El-P thanked the fans for helping them score that number one slot before the duo launched into “Talk to Me.” It’s a track that succinctly embodies the crux of what RTJ does so well. In the span of just two and a half minutes, they tackled a whirlwind of topics, including the crack-cocaine epidemic of the '80s, Donald Trump, the Vietnam War, and violence in the African-American community. 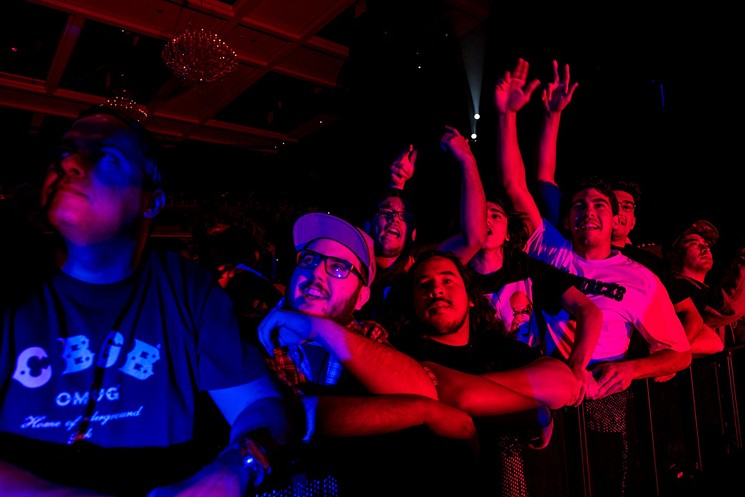 Photo by Karli Evans
That is what makes Run the Jewels an elite rap group — two wordsmiths spitting hard-hitting truths over thumping, equally hard-hitting beats. Assisted by their tour DJ and a little help from the crowd, inserting the odd “RTJ” at appropriate moments and singing every chorus, the two put on a show that was an old-school rap experience for the 21st Century.

Aside from their lyrical creativity, much of what makes this partnership work so well is their onstage chemistry. The interplay between El-P and Killer Mike is flawless. They weave in and out of each other’s verses and have even perfected a bit of choreography, bouncing and hopping in sync to the rhythm of each other’s words.

The Atlanta-meets-Brooklyn duo used their voices as not only instruments but also weapons of war, specifically against hip-hop, lesser talents, the broken American political system, social injustices, and a lifeless night on the couch. 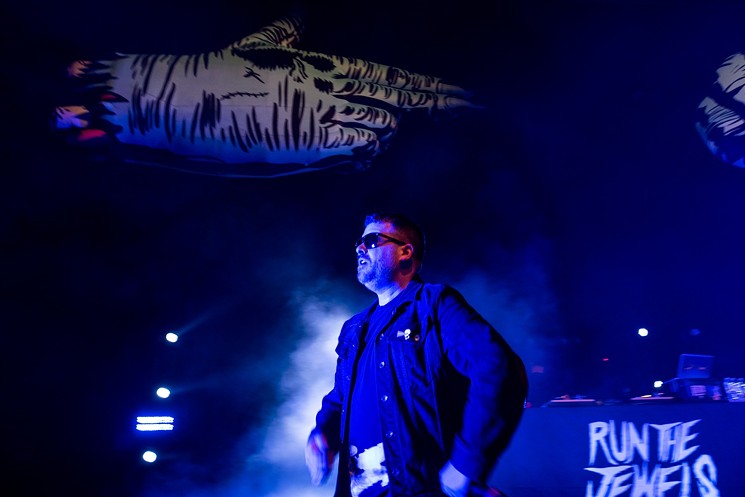 Photo by Karli Evans
Standout cuts included “Oh My Darling Don’t Cry,” “ a Panther” (which features Trina, but sadly the Miami native was absent from the show), “Lie, Cheat, Steal,” and the closer, “Close Your Eyes (And Count to Fuck).”

Between some songs, both El-P and Killer Mike busied themselves with advice and exaltations. “If you didn’t come with her,” Killer Mike shouted at one point, “don’t touch her, or we’ll punch you in the face.” In addition to respecting the ladies at the show, he also asked everyone to be careful if they crowd-surfed. Later, with numerous RTJ hand signs in the air, Killer Mike declared, “We a motherfuckin’ community!”

That sentiment fell on deaf ears for a few idiots: A minor fight erupted in the pit but was quickly broken up. Similar incidents occurred in Tampa and Nashville earlier in the tour. Some people just shouldn’t leave their homes. Photo by Karli Evans
Still, a common enemy can always bring people together. Not long after El-P lamented that it had been “a stressful couple of months,” chants of “Fuck Donald Trump” rang through the Fillmore, to which Killer Mike punctuated with a simple “yup” after each beat. It was fitting that this led directly into “Lie, Cheat, Steal,” a commentary on the hidden powers that be, running our lives by lying, cheating, stealing, killing, and, ultimately, winning.

The now-iconic Run the Jewels logo was designed by El-P and artist Nick Gazin. In a 2015 interview, explained that the logo is a visual representation of robbing or snatching someone’s chain. However, he went on to say that at the heart of it, “The whole image is about coming back after having been beaten down." It’s the sort of layered symbolism with double meanings that speaks to the pair of elements that make Run the Jewels critical and fan favorites. On the surface, RTJ is an intense group that forces listeners to vibe to its sound. But once we take the time to listen more closely, the message is one of opening our eyes to the wrongs of the world and battling back with our collective might.