It seems like art is everywhere in Miami these days: galleries, hotels and condos, parks, and street corners. But long before the Basel boom brought an explosion of galleries to the city, locals were adorning themselves in a different artistic genre: body art.

Today, Miami's tattoo scene is bustling, driven in part by tourists wanting a lifelong memento of the Magic City but supported by a dedicated group of inked-up artists and designers who want to make the world a better place, one sleeve at a time. Whether you're getting your first tattoo or filling that last spot on your body with an ode to your mama, these are the best tattoo shops in town. Ocho Placas
Photo by Karli Evans
1. Ocho Placas. Ocho Placas holds it down as Miami’s top shop for traditional and neo-traditional tattoos. Come here for impeccably precise outlines, solid blacks that pop, and beautiful old-school designs that will leave you looking like you came back with a souvenir from a World War II island-hopping campaign in the South Pacific. If Sailor Jerry isn’t exactly your style, check out artist Pooka Machine’s unique and eye-catching floral work. Veteran tattooers Javier Betancourt and John Vale took over Ocho Placas in 2009 after the untimely death of its founder, Jose Luis Carrera, who had opened the shop in 2001. But don’t let the morbid story fool you — the folks here consistently create some of the liveliest tattoo art in all of the 305. 6240 SW Eighth St., Miami; 305-264-0888; ochoplacastattoo.com. 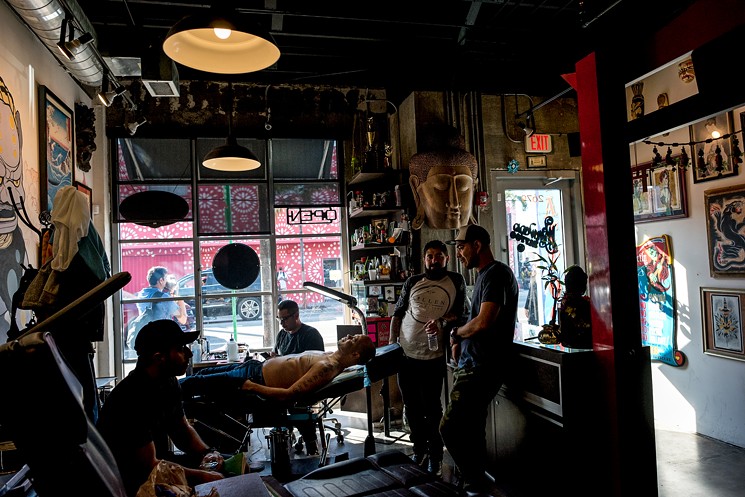 Tattoo & Co. Midtown Miami
Photo by Karli Evans
2. Tattoo & Co. Midtown Miami. If scarfing down pan con lechón and cortaditos while getting inked isn’t quite your thing, head north to midtown and check out Tattoo & Co. Reflecting the district's eclectic art stylings, Tattoo & Co. excels in almost every tattoo style, but owner Javier Acero’s tribal designs and artist Alejandra Idarraga’s watercolors are particularly powerful. The shop also hosts a slate of visiting tattoo artists. Tattoo & Co's exceptional artists and clean and friendly atmosphere mean the place is usually booked pretty solid, so be sure to call well ahead to schedule an appointment. But don’t worry — if you walk in and find all of the artists are busy, piercer Lily Orozco will be more than happy to sit down with you and satisfy your craving for body art. 3449 NE First Ave., Miami; 305-485-0770; tattooandco.com. Iris Tattoo Studio
Photo by Karli Evans
3. Iris Tattoo Studio. Iris cracks the top three because of the work it’s doing in changing the traditional American tattoo aesthetic and because its watercolor and geometric designs really capture the Wynwood and Miami vibe. The shop was founded in Argentina four years ago by Nahuel Hilal after his horrible experience at a tattoo parlor in Buenos Aires. “I walked in and everyone was just so rude to me," Hilal says. "I was also super-disappointed with the aesthetic of a lot of mainstream tattoos — the blacks, the reds, the gloominess.” The Miami outpost, which was opened by Kenneth Springer, debuted in 2016. Iris Tattoo’s artists are all trained graphic designers, and the shop's mission is to make tattooing more approachable and enjoyable by bringing design sensibilities to the inking process. The shop's friendly and creative nature is reflected in its clientele. This isn’t where the haggard, full-body-suited yakuza bosses come to get inked. Instead, Iris might just be the best place in Miami to get your first tattoo, and to get one that’s as unique and weird as the city itself. 2700 N. Miami Ave., Suite 508, Miami; 786-615-9186; iristattoomia.com. Love Hate Tattoo. See more photos from the ten best tattoo shops in Miami.
Photo by Karli Evans
4. Love Hate Tattoo. This is the tattoo shop featured on the TLC reality show Miami Ink. It’s the shop that helped make the South Beach lifestyle notorious and visible, and it arguably put Miami on the map as a destination for body-modification art. Owned by the very recognizable Ami James, Love Hate Tattoo is known for doing great work in all styles, but resident artists such as Federico Ferroni and Darren Brass are better known for their eclectic mixtures of traditional Japanese and modern-realist sensibilities. Because Love Hate always hosts a slew of visiting tattoo artists (sometimes up to eight), the shop typically caters to high volumes of impulsive tourists looking for a permanent South Beach souvenir. But discriminate against this shop at your peril — even if the celebrity-tattoo-artist fad never quite caught on in the mainstream, pieces by Love Hate's signature artists are big, bold, and easily recognizable by connoisseurs of the craft. 1360 Washington Ave., Miami Beach; 305-531-4556; facebook.com/miamiink.lovehatetattoos. 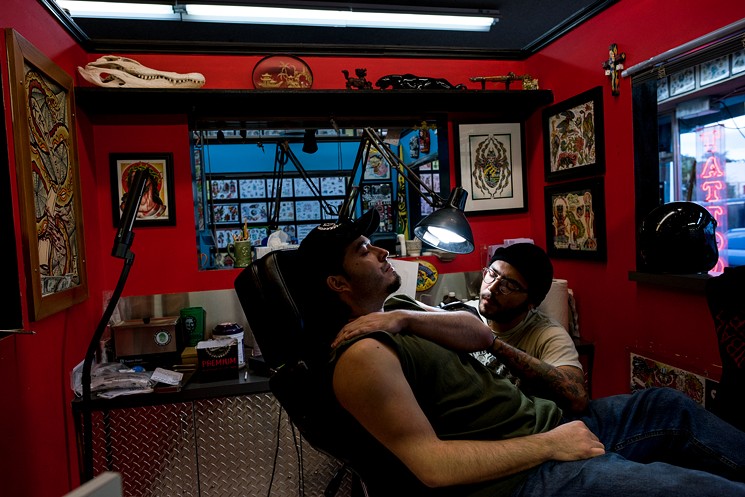 Tattoos by Lou
Photo by Karli Evans
5. Tattoos by Lou. Founded by Lou Sciberra, a Maltese immigrant who began tattooing in Queens back when inking people was still illegal in New York, Tattoos by Lou’s Dadeland location has been proudly waving the banner of alternative culture since 1986. Now run by Lou’s daughter Michelle, Tattoos by Lou is a successful three-shop franchise with satellite locations in North Miami and South Beach. Dadeland artists Troy Lane and Lenny Rodriguez do big, bold tattoos with great depth and contrast, while Ozzy Pérez specializes in lettering. The shop also boasts Ken Cameron — Michelle’s husband and Tattoos by Lou's co-owner — a veritable legend in the ink world who handcrafts some of the finest tattoo machines on the planet. Though Tattoos by Lou’s aesthetic skews toward traditional American and Japanese, the shop’s pedigree, cleanliness, and quality are unquestionable. Plus, where else in Miami can you get tattooed by artists who studied under tattoo pioneers and then hop next door to one of Miami’s oldest head shops, High Tide Tobacco & Gifts? 9820 S. Dixie Hwy., Miami; 305-670-6694; tattoosbylou.com.