Photo courtesy of Another Wing
Another Wing brings DJ Khaled's favorite finger food to new heights.
On a quest for Miami's best chicken wings? Think beyond Buffalo. Though the tangy, vinegary sauce is a classic, some of the city's best wings are tossed with Asian spices, garlic and butter, sweet and smoky barbecue sauce — or simply left naked.

Luckily for you, we took on the task of sussing out the best wings in Miami. Below, in alphabetical order, are the ten favorites we found. 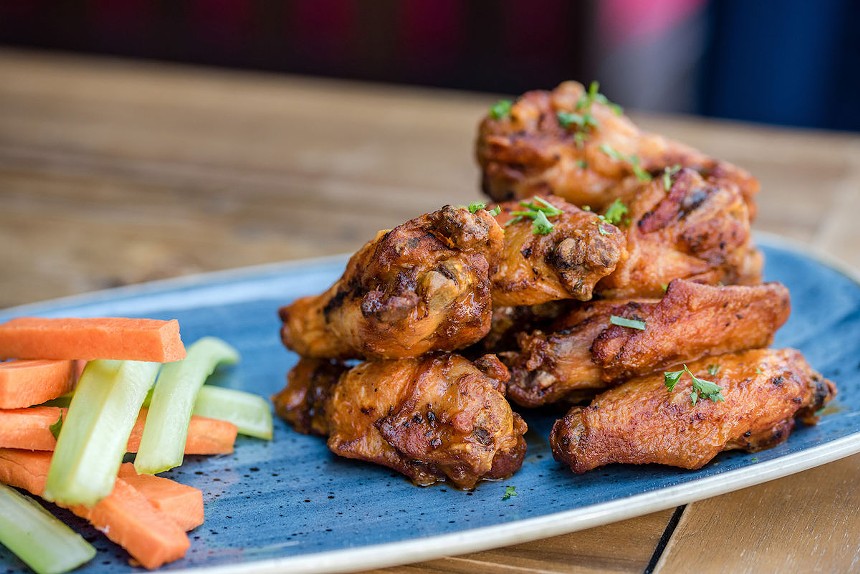 690 SW First Ct., Miami
305-570-4468
americansocialbar.com
American Social offers chicken wings with classic flavors and exciting new ones including Guavenero, a guava-habanerno glaze. Guests can also opt for signature Buffalo or Kansas City style barbecue sauce. All chicken wings are served as an eight-piece dish with a side of carrots, celery, and blue cheese dressing for dipping. 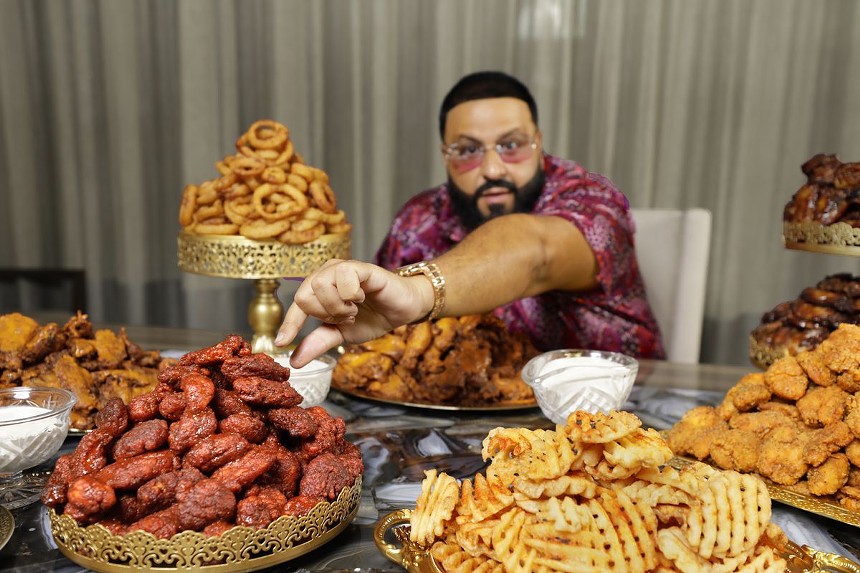 Delivery Only
anotherwing.co
Khaled Mohamed Khaled — known to many as DJ Khaled — is more than just a Grammy award-winning artist and record producer. These days, he's also the producer of a Miami-based, delivery-only restaurant he calls Another Wing. And, you guessed it, it's all about chicken wings — bone-in, boneless, and vegan options, to be exact. Available for delivery via multiple platforms including Postmates, UberEats, and Grubhub. The menu features seven signature flavors Khaled developed alongside his personal chef, Melissa Zuniga. They include the "Un Un Un Believable Buffalo" and "You Loyal Lemon Pepper" to the "Suffering From Success Sesame Teriyaki" and "They Don't Want You To Win Truffalo," which combines black truffle, Parmesan cheese, and Buffalo sauce. 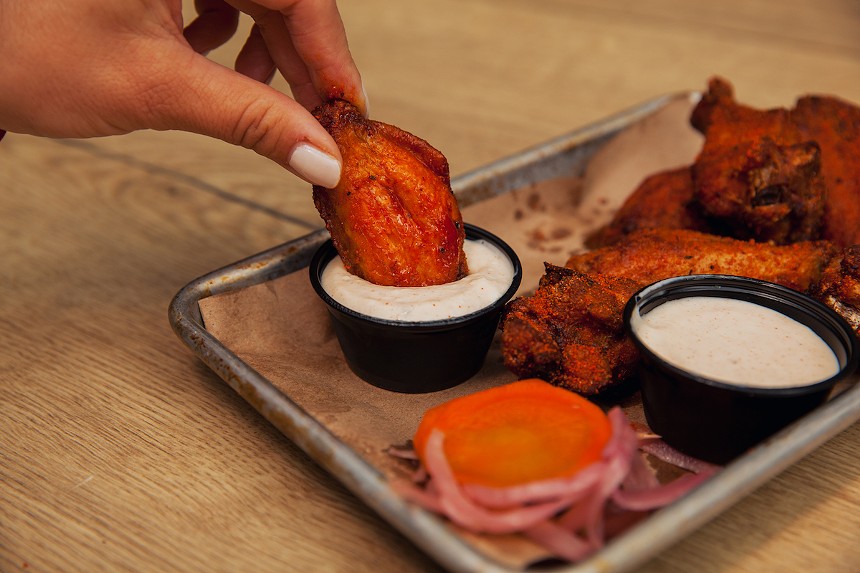 947 Brickell Ave., Miami
723 Lincoln Ln. N., Miami Beach
786-705-2083
bbqcraftco.com
BBQ & Craft Company by competition barbecue judge and pitmaster Anthony Nicolosi recently opened a new location at the Lincoln Eatery. The original location in Brickell offers up the same menu, which draws inspiration from different styles of smoking meat from around the country. That means you'll find touches of Texas, Tennessee, Georgia, and the Carolinas along with a Miami spin. While the menu features top-quality prime and specialty meats from Wagyu beef to suckling pig, you can't go wrong with an order of Nicolosi's dry rub wings. Served in six or twelve piece meals, they're perfect sans sauce, but are even better when dipped or slathered with his take on the creamy Alabama-style white barbecue sauce. 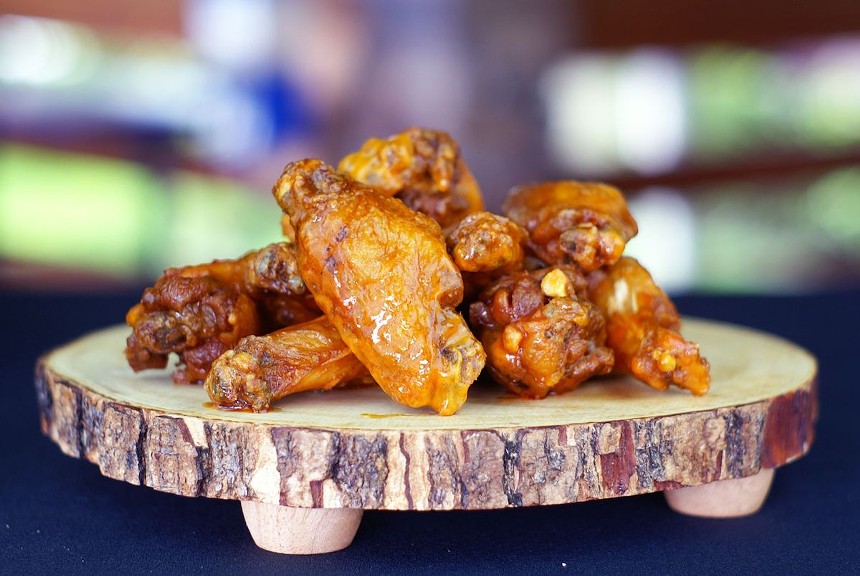 multiple area locations, including:
8318 SW 40th Street, Miami
305-220-3995
brusroom.com
It seemed to take years for this Broward transplant founded by ex-NFLer Bob Brudzinski to make its way south to Miami. But when it finally opened in Westchester in mid-2015, it put an end to the plight of fans shlepping north for Bru's Room's addictive wings. The first thing to note is that for a few extra bucks, you can request all drumettes or all flats — a worthwhile perk for any serious wing eater. Next, note the deep-chocolate-maroon color smattered with garlic and fantastic bits of char. This is Bru's "triple threat" sauce, a combination of smoky, spicy barbecue sauce and a sweeter amalgam on wings that are grilled and showered with pungent garlic. If you must turn your back on Buffalo sauce, this is the way to do it. 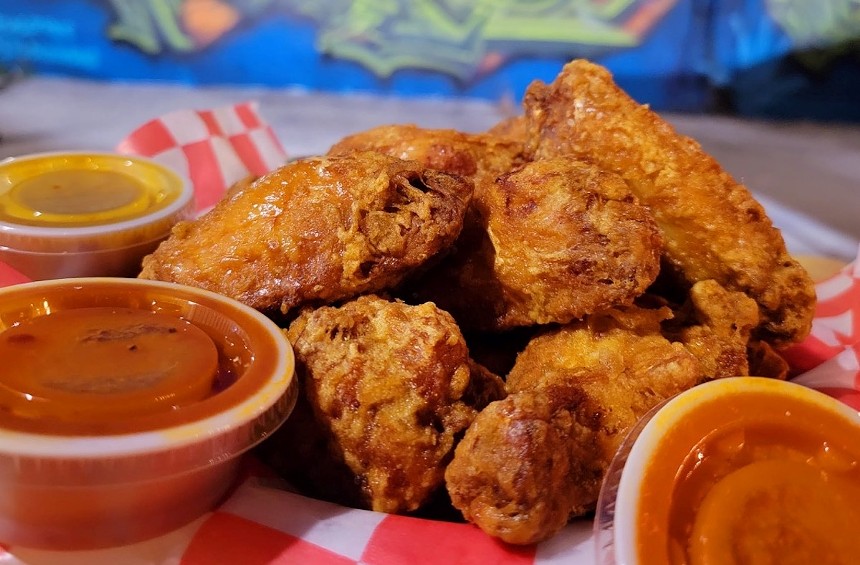 565 NW 24th St., Miami (at Wynwood Brewing Company)
@cluckinrightchicken
Every week, Wynwood Brewing resident pop-up Cluckin' Right hits the streets, offering hungry imbibers some of the city's best deep-fried chicken wings. The chef behind these wings is Syracuse native Mathieu Saint-Louis, who launched the side business on Super Bowl Sunday in 2021. His Syracuse-style wings start with the right raw material: plump, meaty wings that are hand-selected and trimmed. The wings are brined and dredged in the chef's mix of flour, salt, and seasoning, then left to rest overnight to let the flavors soak into the meat before it's fried till the shell is thin and crisp and the meat beneath moist and tender. The wings arrive naked, and you'll do them a disservice if you don't try at least one that way. Then go ahead and dip or drown them in any of Saint-Louis' made-from-scratch sauces, including his take on honey mustard, barbecue, and a specialty Frankenstein sauce styled after his favorite wing sauce in Syracuse: Sweet and tangy with just a touch of heat, it's the perfect match for these babies. Serving Thursday through Sunday at Wynwood Brewing Company from 4 p.m. until sold out. 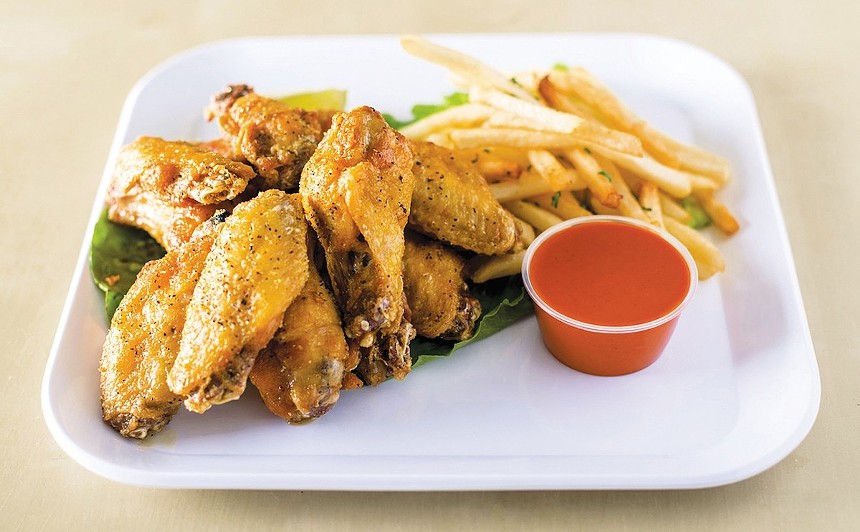 1039 NW Third Ave., Miami
305-371-6556
houseofwingsmiami.com
When it comes to chicken wings, options and customization separate the good from the mediocre. Lucky for you, both are offered at Mussaddiq "the King of Poultry" Muhammad's House of Wings. The chicken-wing master chose historic Overtown as home base for his counter-service eatery specializing in — as his nickname suggests — the most prized part of poultry. Since opening in 2003, the place has become a neighborhood institution. It offers more than 50 sauces that can be used on a choice of grilled, dry-rubbed, or deep-fried wings. Selections include everything from barbecue, sweet, or savory to spicy and homestyle. Popular choices include "Barack Obama" (a sweet blend whose ingredients are top secret) and "Ghetto" (a sweet-smoky mixture of four barbecue sauces). However, the jerk wings — flavored with a combination of fiery jerk seasonings and classic, vinegary Buffalo sauce — never disappoint. 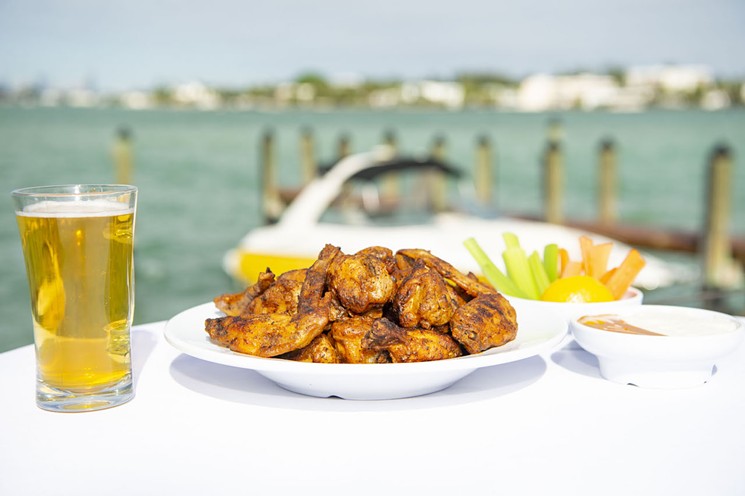 1819 79th St. Cswy., North Bay Village
305-866-1570
bestwesternonthebay.com/shuckers-waterfront-grill
You won't need any sauce on Shuckers' flame-grilled wings that come in orders of five, ten, or 20 pieces. When they arrive at your table, you'll find they're crisp on the outside, hot and juicy on the inside, and boast the perfect amount of flavor thanks to a secret blend of spices. Of course, the house-made wing sauce for an extra 75-cents only kicks it up a notch. The best part: Located just off the 79th Street Causeway, Shuckers overlooks Biscayne Bay, so your wings come with a view, too. 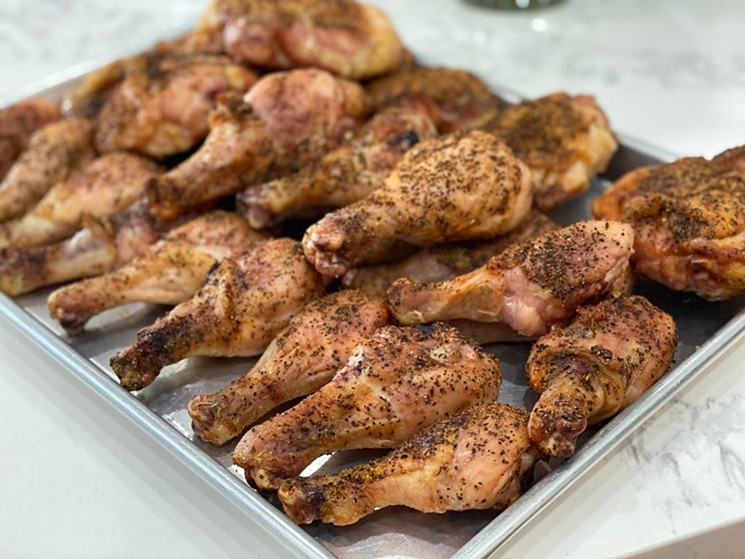 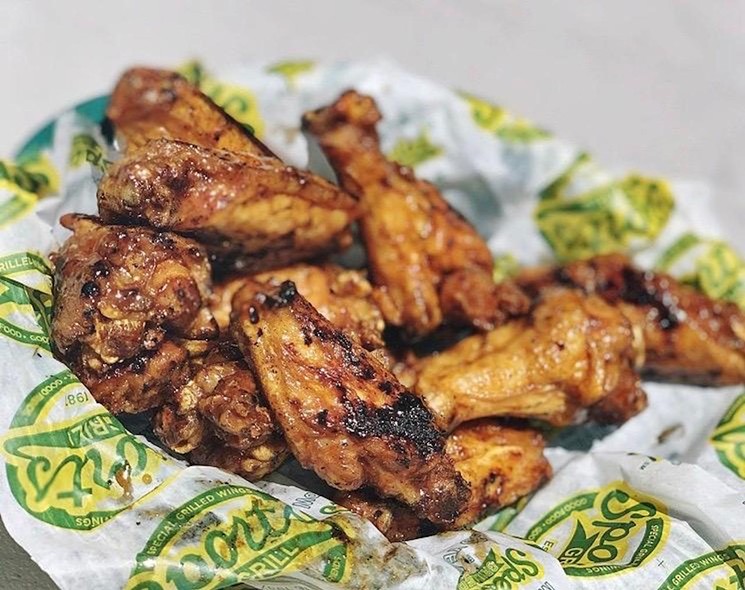 multiple area locations, including:
11481 SW 40th St., Miami
305-485-8845
sportsgrillmiami.com
Sports Grill is an average-looking local sports bar chain that serves anything but average wings. As a longtime local favorite, it's grown to seven locations spanning South Florida since the first restaurant opened more than 30 years ago. Today, Sports Grill offers eight different styles, from buffalo and barbecue to jerk and a few signature recipes, like the "Miami Heat" and "Dale-style" wings. But the classic option, and a house favorite for decades, is the special grilled wings. They're dipped in a vinegar-based sauce, charbroiled to offer just the right amount of crisp, then finished with a light brushing of Sports Grill's mildly spiced secret sauce, with a choice of ranch or blue cheese dressing on the side. 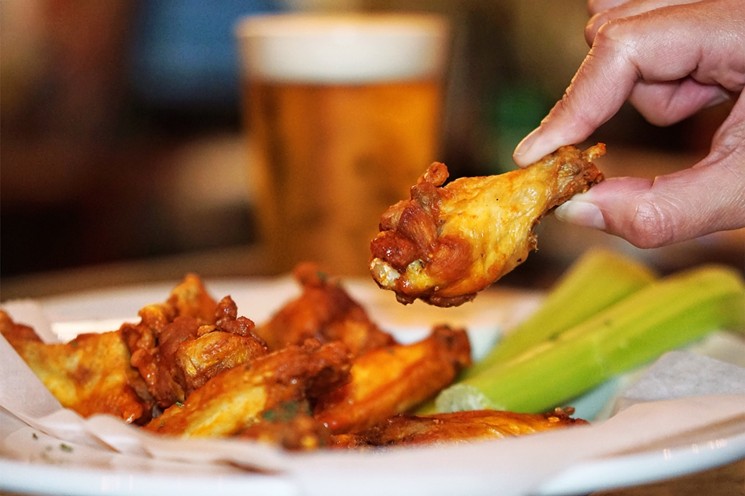 5813 Ponce de Leon Blvd., Coral Gables
305-668-1742
titanicbrewery.com
This microbrewery and pub is a longtime favorite of University of Miami students and beer buffs. Windows behind the bar give diners a glimpse of the restaurant's brewing operations, the perfect spot to sit and pair a cold brew with a pile of wings. Titanic's chicken wings come in a bucket for $14. They might look like regular Buffalo wings, but they're not. Instead, they're glazed in a creamy, Sriracha-based sauce that hit you with a spicy punch of chili sauce that has earned a cultlike following.