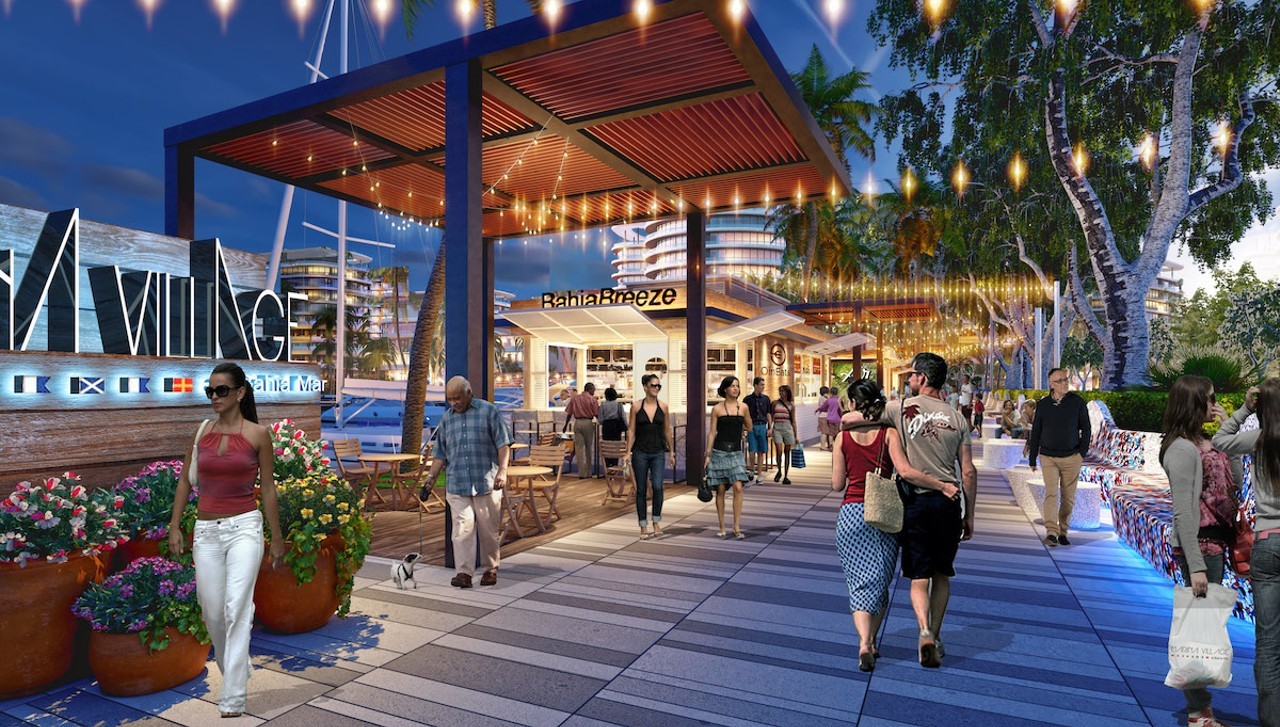 Renderings by Kobi Karp
A rendering of the north view of the Marina Village at Bahia Mar
The “Venice of America” – a city known for its mega-boats and superyachts – is set to get quite the boat-gone-food-hall experience.

As part of the initial phases of the redevelopment of Fort Lauderdale’s Bahia Mar complex, Marina Village at Bahia Mar – a 35,000 square-foot, $16 million open-air food and entertainment venue – was just unveiled.

As part of the design and adjacent to a promenade area with Intracoastal and Atlantic views, is a totally decked out, permanently moored ferry that was once utilized as a transportation vessel between Fisher Island and Miami Beach.

“One of the things we wanted out of this deal and project is to give something to the community... something they could put their arms around and truly enjoy,” Jimmy Tate, president and owner of Tate Capital, tells New Times. “One of the constants we heard was for neighbors and tourists to have food and beverage on the waterfront. So, this is our way to deliver that and have a positive introduction into the market, from a quality, aesthetic, and architectural standpoint.”

Designed by Kobi Karp and conceptualized by Tate Capital and Rok Enterprises, the vessel will hold approximately 500 people across its 5,000-square-foot lower deck and 3,000-square-foot upper deck. Marina Village at Bahia Mar will boast a heavy nautical vibe with dashes of blues, whites, woods, tile, and stucco.

According to Tate, there will be eight permanent food kiosks and three bars. The search for vendors is a work in progress for now, but Tate says he's looking for a mix that will “run the culinary gamut” with outposts for sushi, lobster, an oyster bar, Italian food, Mexican food, and desserts.

“We just went out with our deck on the project to food groups and the response has been overwhelming,” he says. “We are going to be very strategic in which food groups are a part of this vision, with the goal of quality, high-end establishments.”

Admission to Marina Village at Bahia Mar will be free and open to the public. Tate says the venue will be rentable for special events and there are hopes to attract major music acts for concerts. In those instances, there would be an admission fee. Currently, the estimated opening timeframe is Fall 2023.

As for the greater Bahia Mar complex, the search is on for a hotel/residence partner that will have additional culinary offerings of its own.