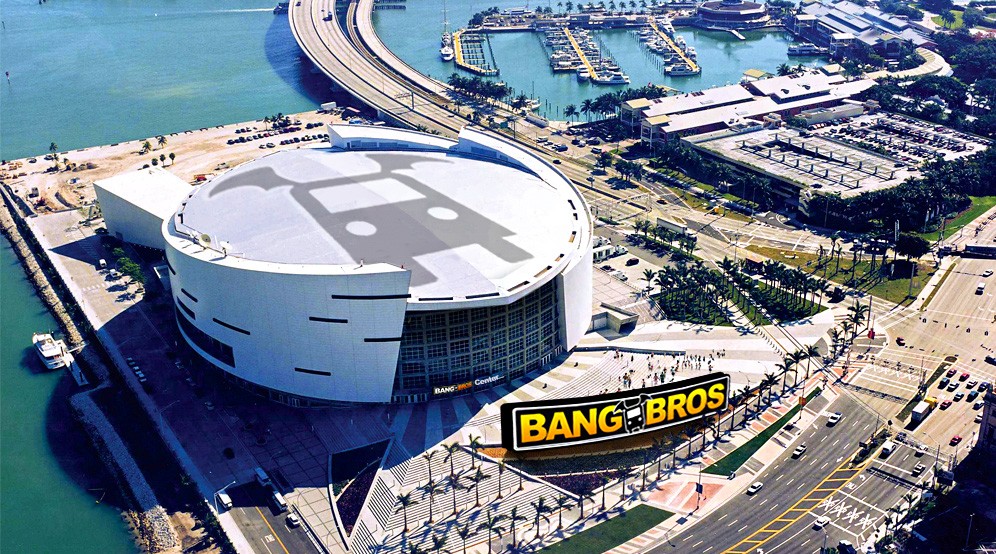 BangBros artist concept
Porny, yeah. But oh, so Miami!
Miami-Dade County is going through an unscheduled breakup, courtesy of a global financial scandal that unfolded late last week resulting in the collapse of the cryptocurrency exchange FTX.

More on that in just a moment.

On the heels of FTX CEO Sam Bankman-Fried's precipitous descent into bankruptcy, the Miami Heat and Miami-Dade County announced they'd be cutting short the ten-year agreement that allowed FTX to slap its name and image on the basketball franchise's arena downtown, which is owned by the county.

The news broke only a year after Miami-Dade and FTX agreed to a 19-year, $135 million deal with the city and team. As reported by Coinbase, FTX owes the county $16.5 million for defaulting on the deal, plus the cost of removing the signage, per the terms of the contract.


Miami-Dade County and the Miami HEAT have released the following statement pic.twitter.com/ERZo1IsZ2o

To recap: In the space of a few days, investors are out billions of dollars, the Heat's home is nameless, a guy who looks Egon Spengler come to life is the new poster boy for the perils of cryptocurrency. Not only does it feel like something out of a movie, but it undoubtedly will be a movie. It's just a question of who directs and stars.

As weird as that sounds, it's even weirder than what you're thinking.

Rather, almost as soon as it became known that the naming rights were back on the market, BangBros reiterated an offer they submitted in 2019: $10 million in return for naming rights to the Heat's home for the next ten years.

The proposed name of the building through whose capacious doors Heat fans might enter? BangBros Center. As in: The BBC."

The county didn't bite, however. And it wasn't until mid-2021 that the literally too-good-to-be-true deal with FTX was struck.


To @MiamiHEAT, in 2019 we submitted a 10 Million Dollar bid for the naming rights to the arena, suggesting the name Bang Bros Center (The BBC). Due to recent news about FTX, we are resubmitting our offer as the new home of the Miami Heat pic.twitter.com/QThqRY0KC9

In a text exchange responding to New Times' request for further comment, a BangBros spokesperson said the company holds no grudges regarding the county's rejection of its 2019 offer. BangBros only asks that its proposal be re-evaluated in light of subsequent events.

"We hope they seriously reconsider the BangBros Center (BBC)," the company rep explained. "If they accept our offer, they would be supporting a local business made up of loyal season ticket holders for the last 20 years. They can show their loyalty back by selling us the naming rights."

On top of that, spokesperson added, "We would also do our best to help the fans that were impacted by FTX, because our love isn’t just for the Heat, it’s for Miami-Dade County."

Loyal New Times readers will remember that back in 2019, we recommended that Miami-Dade accept the generous offer from a hometown small business made good.

If you're out there saying it's crazy talk to believe Miami-Dade and the Heat might actually accept BangBros' offer, let's just take a moment to acknowledge that county officials previously accepted millions from what is now being described as a "gang of kids" that was all dating one another and living together in the Bahamas while mishandling billions of dollars.

It's likely Bankman-Fried and FTX have screwed far more people than BangBros ever will.

By comparison, the people best known for filming consensual sex in a van seem downright straight-edge.

And counterintuitive as it might seem, it's likely Bankman-Fried and FTX have screwed far more people than BangBros ever will.

The Heat now has the opportunity to turn the media attention surrounding the most embarrassing naming-rights partner of all time into something much less embarrassing but likely just as newsworthy. One could say it's your classic game of hiding the hot dog with the media.

Think about it, Miami Heat: Credibility is lost. The ocean will soon reclaim the land your arena sits on anyway, so you might as well sell to the highest bidder.