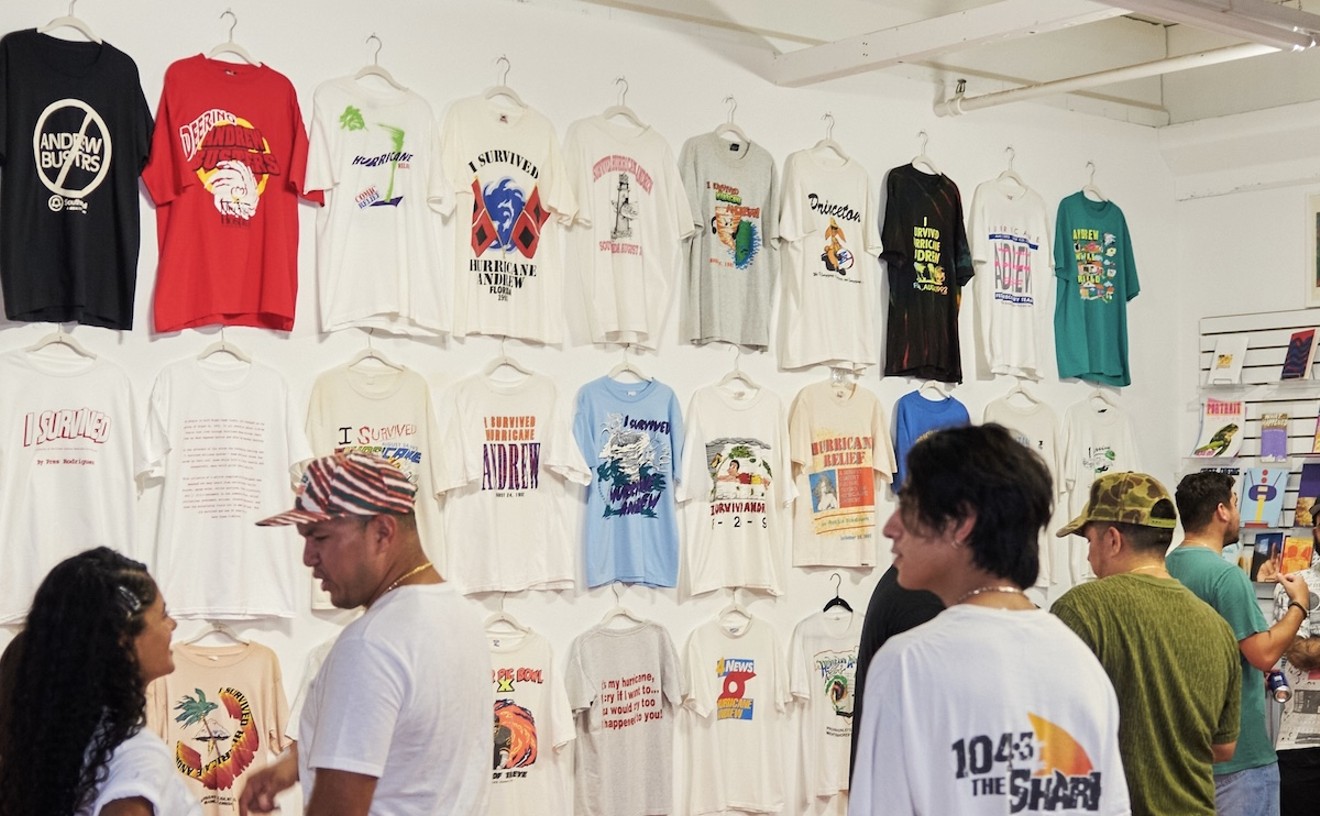 Photo by Julian Cousins
Attendees at Andrew's “I Survived” Hurricane Andrew memorabilia exhibition at Dale Zine.
Pres Rodriguez has spent the past seven years hunting for Hurricane Andrew memorabilia, unsure what he would use them for. More than 70 shirts in, the Andrew skate shop cofounder had amassed a collection that served to commemorate the storm’s 30th anniversary when it pummeled South Florida in 1992.

At the time, the Category 5 cyclone was the strongest storm the state had seen since the early 1930s. It hit southern Miami-Dade County the hardest, damaging more than 100,000 homes, including the childhood homes of Rodriguez and Nick Katz, Andrew cofounder and owner of Lot 11 Skatepark.

Katz, 32, was only 2 years old when Andrew struck his home in Cutler Ridge.

“It’s an event that will be venerated in your household forever because whether it was a grandparent, parent, or neighbor, somebody was there,” Katz says. “And to have this weird disaster have such a diverse collection of merchandise attached to it really shows Miami’s ingenuity.”

“The words ‘I survived’ are on most of these shirts, so it’s a commemoration to this event, but also to the shirts themselves, which have survived 30 years of being around,” Rodriguez tells New Times. “Why not celebrate their existence?” 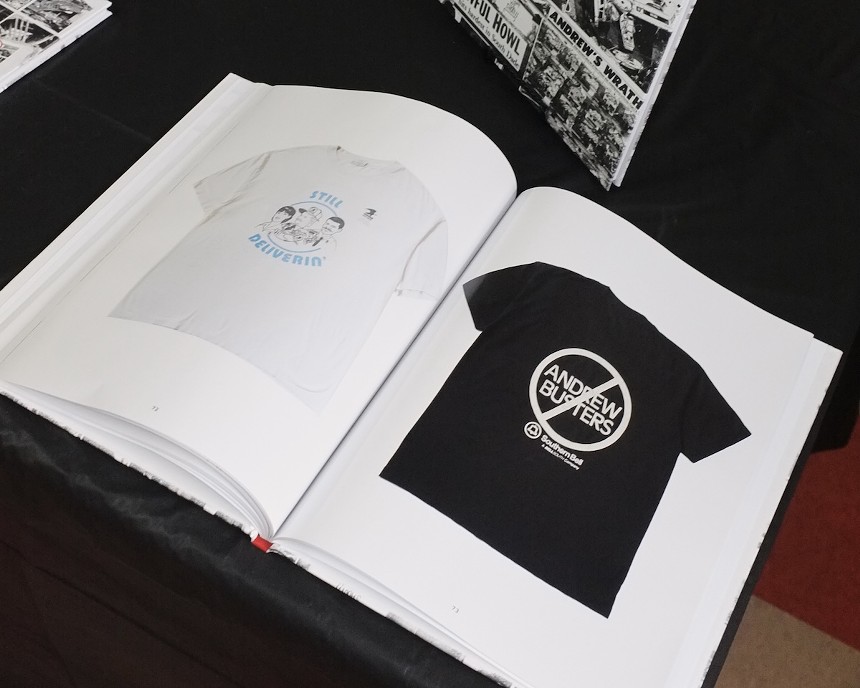 I Survived photo book by Andrew displays vintage Hurricane Andrew-themed T-shirts.
Photo by Julian Cousins
The double entendre provoked him to turn his niche obsession into a shirt exhibition, photo book, and clothing sale. It also reps his skate brand Andrew. The collection, titled I Survived, was released last month via Dale Zine. The 92-page photo book, shot by local photographer Julian Cousins, displays each shirt's unique visuals and includes a foreword by Bryan Norcross, the renowned meteorologist and hurricane specialist. His 23-hour broadcast during the disaster was the only one to remain on air.

Katz and his brothers were evacuated to his grandmother's home in Westchester during the storm. When his family returned home a few days later, his parents barely recognized their house.

"All of the contents were sucked out like an industrial vacuum cleaner had just pulled everything out," Katz says. "My house was gone. The roof had been completely ripped off."

Disaster relief organizations often created the "I survived" shirts to fundraise for families impacted by the storm. Rodriguez reckons that others sold fake or off-brand designs to make a quick buck.

"Who knows where the owners are? They've probably made hundreds. Some of them are obviously from legit organizations," says Rodriguez, pointing to the American Red Cross and Goodwill as examples. "Then there's a lot that probably have more dubious origins, with the same graphics and slight tweaks." 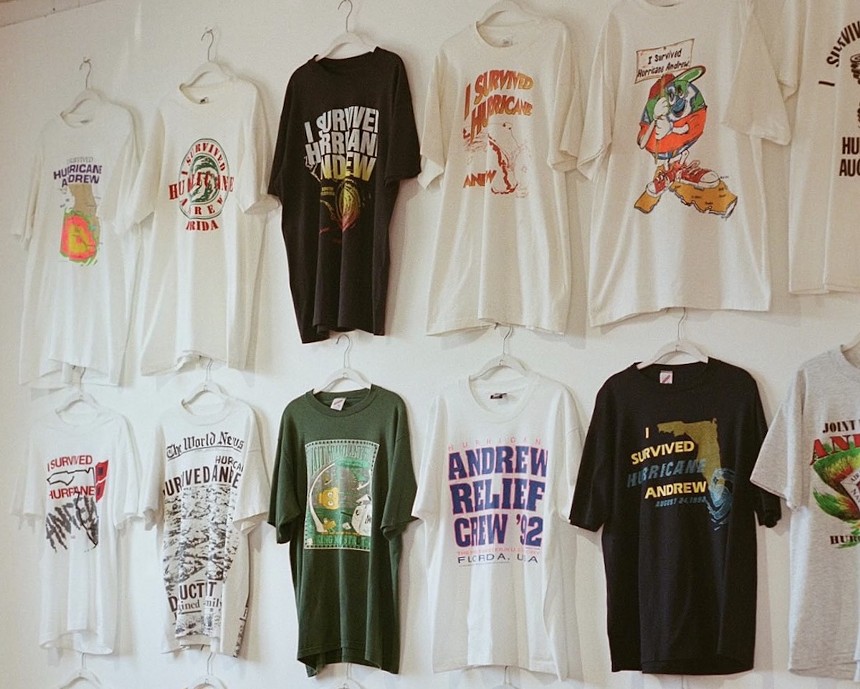 Photo by Julian Cousins
Presently, some of these vintage T-shirts can be found on sites like eBay at prices ranging from $15 to $70. Andrew's curated shirts range from around $40 to $100 apiece. Prices depend on the quality and rarity of each design, Rodriguez notes.

He believes each T-shirt is worth more when grouped as a collection than if seen as individual shirts at a thrift store.

"To see them all together, people are more willing to seek them," Rodriguez suggests. "It'll drive the price level up, guaranteed."

While Andrew sells other skate brands at the shop, this is its first project which features clothes that aren't its own designs. Rodriguez hopes the collection will inform skaters about the city's often overlooked past.

"The storm really fucked up the city, so we're trying to honor these little corners of Miami, a city that has a history of forgetting its history," Rodriguez emphasizes.