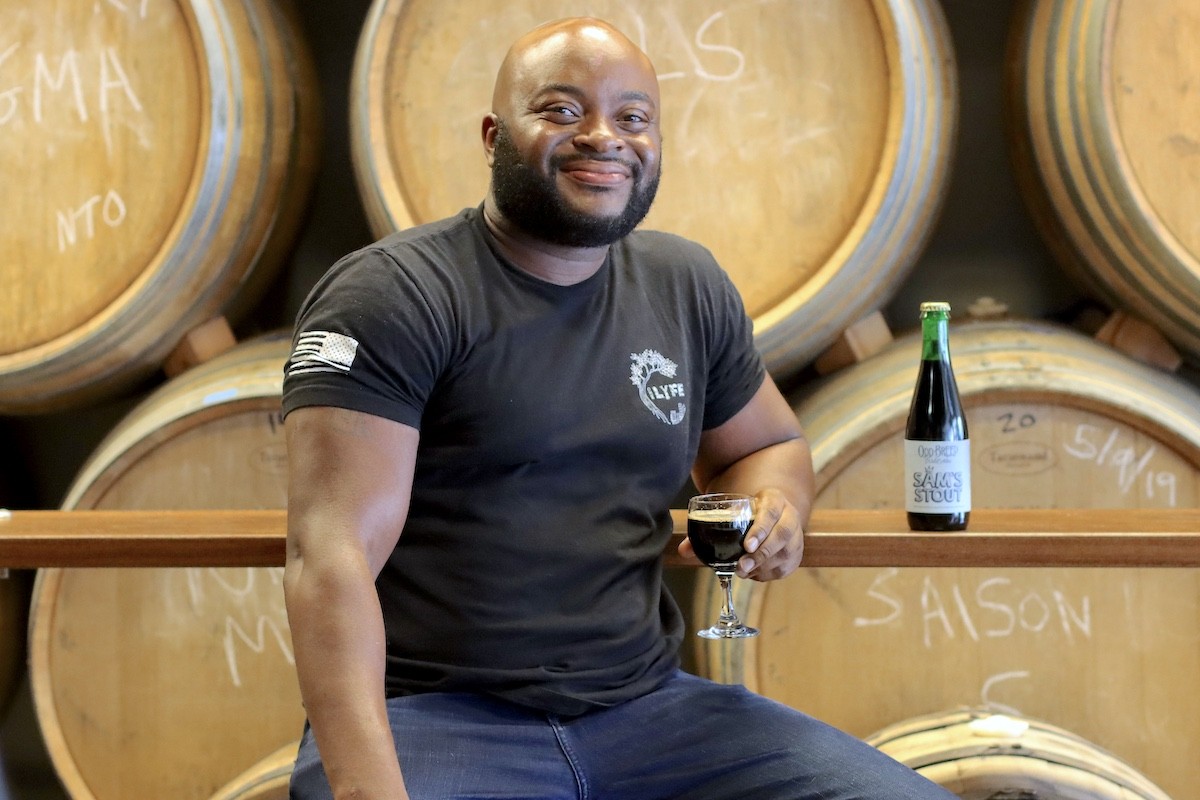 Although Savage Lyfe doesn't have a tap room or production facility quite yet, founder and head brewer Samuel Phanor says he hopes to secure a Fort Lauderdale space in the coming year. When it opens, the focus will be on Phanor's most dialed-in recipes, each a wood barrel-aged beer that includes a stout, doppelbock, barley wine, pilsner, lager, and more.

Phanor says he tried his first "pastry" stout while traveling in San Diego nearly a decade ago, sparking a love for craft brews. He began home brewing in 2017, working on recipes that he now plans to share as part of his flagship offerings.

Now, craft beer lovers can get a taste of Savage Lyfe with Phanor's most recent beer release, "Sam's Stout," a wild imperial stout created alongside Walsh and aged in a Scotch barrel that held Odd Breed's first batch of "Reality Is Obscure."

The lightly-carbonated stout offers a spicy, toasty richness thanks to a combination of "Midnight" and "Special B" malts, a complex and full-bodied beer accented with the flavors produced from Odd Breed's barrels.

"The idea was to pick up microbes and oak character while the beer had time in the bottle to mellow," said Manthe, who helped to ferment and bottle the beer. "That transformed it from being a rich American stout to more of a wild beer. There are notes of leather, dark chocolate, and dark fruit like blackberry and plum."

The beer will be released at 5 p.m. on Saturday, October 8, at Odd Breed Wild Ales. Less than 100 bottles are available and will sell for $20 apiece, with all proceeds going to Kristi House, a Miami-based nonprofit dedicated to healing the victims of human trafficking and child abuse. One keg also will be available on nitro, with half of draft proceeds going to the cause.

Creating a community that supports philanthropic endeavors is important to Phanor, a veteran and former Margate police officer who hopes to combine his charitable efforts with beer-centric fundraisers, releases, and educational events.

Nomad brewery Savage Lyfe Beer Co. will release "Sam's Stout" next month with proceeds going to fighting human trafficking.
Photo by Nicole Danna
In 2019, Phanor says he launched a company called One Lyfe, tapping into his dream to help "people live life to the max." That same year, he teamed up with nonprofit Water is Life, helping to raise $12,000 for Mission of Hope. He's since done several such fundraisers in collaboration with South Florida breweries including Yeasty Brews and 3 Sons Brewing Co.

"After that, I realized bringing a cause and craft beer together could be really impactful," Phanor tells New Times.

For his most recent release, Phanor hopes to keep the focus on the local community by bringing awareness to something he feels hits close to home: human trafficking.

"As a police officer, I've seen firsthand how widespread this has become, and how it touches our communities," says Phanor.

Over the next six months, expect to find Savage Lyfe at a number of pop-up events across South Florida that will include free tastings and bottle releases. Upcoming releases will include an imperial pilsner with Barrel of Monks, as well as a stout in collaboration with Miami-based Tank Brewing.

"Our goal is to spread the word and do as much as we can. For me, being a 'savage' means to go as hard as possible to reach your dreams. There are no shortcuts to success," sums up Phanor. "That's always been our mission with Savage Lyfe and One Lyfe, and — soon — Savage Lyfe Brewing."