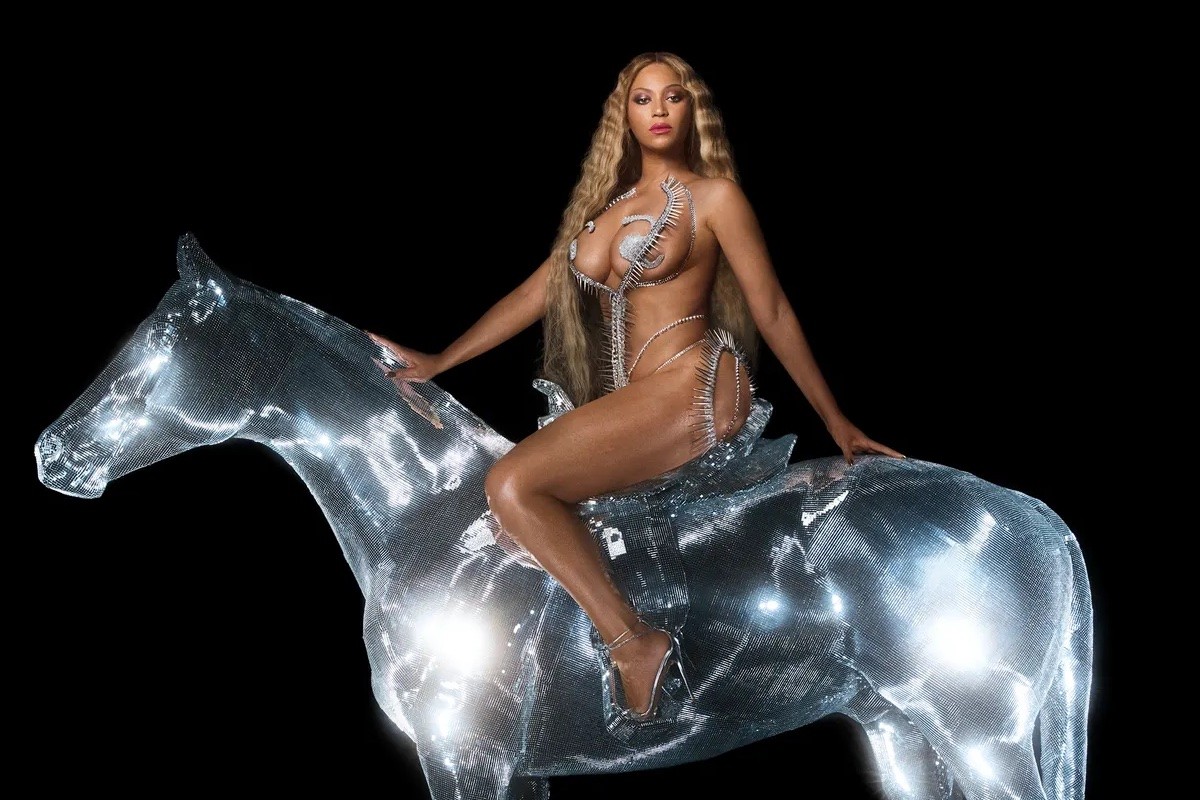 Photo by Carlijn Jacobs
Beyoncé wears Nusi Quero's creation on the cover of Renaissance.
June 30 began like any other day for Orlando-born, Los Angeles-based artist Nusi Quero. The summer sun rose and scorched a few passing clouds, and he rolled out of bed to check his phone. What he didn’t expect to happen next was receiving a barrage of text messages, all singing a similar tune.

“Congratulations, you made the cover."

One of Quero’s pieces of handcrafted, wearable art adorns Beyonce’s chest, torso, hips, and legs on the cover artwork for her much-awaited return to music — her seventh studio album, Renaissance, dropping July 29 through the Queen B’s own Parkwood Entertainment and Columbia Records.

Quero was floored. A couple of months earlier, an assistant of Beyoncé’s head stylist, Marni Senofonte, asked Quero to pull a look featured on his Instagram account that affixes a patterned system of spikes to the body using skin-safe adhesive. He sent over the piece accompanied by an instructional video of how to don it and waited to hear back. He learned his work was being used for album-related purposes, but he had no idea where the piece would ultimately land until Beyoncé premiered the artwork on her Instagram on June 30.

“It’s an honor. I’m very humbled,” he says. “It’s surreal. I don’t even know how to process it, but I do feel thankful and proud.”

Quero, who grew up in Orlando and studied architecture at the University of Florida in Gainesville before dropping out of graduate school to move to Los Angeles with his band Hundred Waters, uses digital tools and methods like 3D printing to create pieces that sit where bras, corsets, and underwear do on a body, though the comparison ends there. Employing ornate patterns and complex geometric systems, his work recalls the beauty and order resplendent in nature and inside each of us while simultaneously ushering us outside Earth’s orbit. His work has been noticed by designers and celebrities alike: SZA reached out to him directly for a piece to wear at the 2021 MTV Video Music Awards, and he designed a large back tattoo for Grimes. 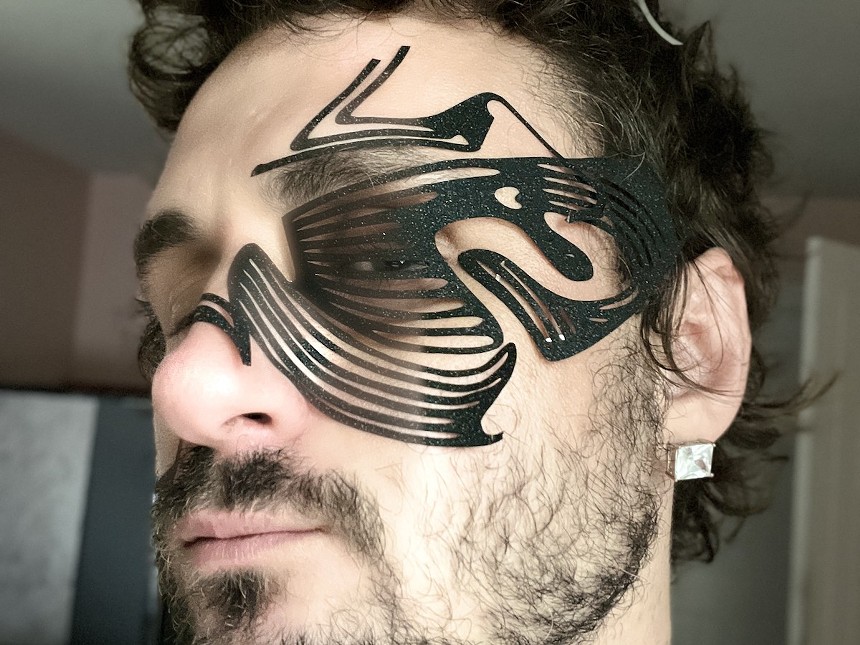 That quest for compositional harmony traces its roots back two decades to Quero’s time as an Orlando high school student obsessed with the work of graffiti artists. He'd scour the online forum 12ozProphet to learn more about the graffiti coming out of cities like Miami and Los Angeles, eventually giving it a shot himself. More than just an adrenaline rush, creating graffiti provided Quero an opportunity to develop and refine his artistic expression.

“My friends and I started out timidly, throwing up stickers on signs and looking around us, all paranoid. We eventually worked our way up to throw ups in illegal places. At first, it was about the rush, that youthful nutrient of being bad,” Quero recalls. “It was when we started to find Florida’s network of highway underpasses — clean, concrete walls where you could take your time and have the capacity of thought to paint — that we started to do what we called ‘pieces.’ That was the first time in my quasi-adult life when I created something, and I wanted it to be different for some reason I couldn’t explain.”

In later years, as an architecture undergraduate in UF’s College of Design, Construction, and Planning, Quero learned elements of design that continue to inform his current dialectical approach.

“What architecture and architectural education imparted most upon my process was the idea of multiple, codependent systems that interweave and cannot exist without one another," he says. "That’s something I’m very drawn to now, mostly in an aesthetic way. All of my pieces and work right now deal with systems. There are always at least two aesthetic languages communicating.” 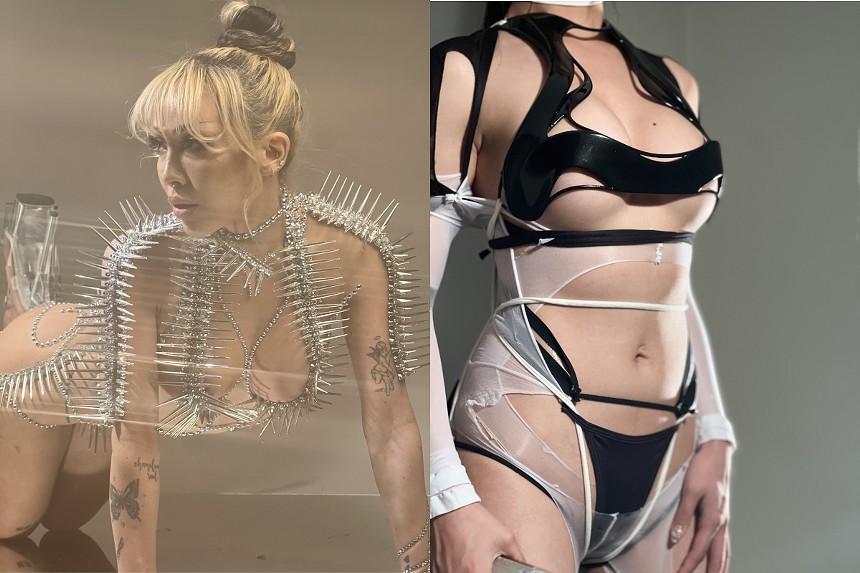 Quero's third collection of pieces features the most versatility and adjustability of his wearable works to date.
Photos courtesy of Nusi Quero
To date, Quero has released three batches of his works, the most recent dropping earlier this month. Compared to his previous output, Quero says his new designs improve upon comfort and fit, thanks to some research into the geometry inherent in human bodies. Using these guiding principles, Quero’s most recent pieces accentuate those parts and places that everybody shares. For example, a bralette features two parts broken apart by adjustable ties.

“Lately, I’ll 3D-print a piece and then perform surgery — cutting them up, bending them with heat, workshopping them to better understand the physics and geometric harmony of it on a body,” Quero explains. “With this new drop, there’s only one size, and they work for most bust sizes and body types. I’ve started to cut away at the areas that are body-size dependent. It’s not perfect, but I’m trying more and more to make them as versatile as I can.”

In the Instagram caption accompanying the reveal of her Renaissance album cover, Beyoncé said she hopes her new collection of songs empowers listeners with the freedom to “release the wiggle” and feel “unique, strong, and sexy.” Similarly, Quero intends to embolden those who wear his pieces to express themselves in any way they see fit.

“At first, I didn’t have a manifesto or some goal that drove the artwork to its place, but it emerged, and now it’s a duty," Quero says. "When you have a Supreme Court elected by a vastly pathetic minority deciding what half of the population can do with their bodies, I think it is the role of anyone creating things to make people feel empowered in some way. People want to be free, and people deserve to be free, especially in our fucking self-expression. That empowerment is inherent in the work — it’s not so profound; it’s life-changing, but it might make someone feel more confident one night, or it might make someone feel like a fairy or an alien or some shit. That’s an amazing thing to do for people that I never thought I’d be able to do.”