Photo by Adinayev
King Gizzard & the Lizard Wizard made it along await Florida debut with two back-to-back shows at Space Park.
The band's set started with a steady drum beat.

Saturday, at 9:30 p.m. sharp, drummer Michael Cavanagh began pounding his kit as the five other members of King Gizzard & the Lizard Wizard walked toward their instruments and took the sold-out crowd at Space Park on the strangest of sonic journeys.

There is truth to advertising with the Australian band. King Gizzard & the Lizard Wizard are as eclectic and random as their name would lead you to believe. With one foot in psych-rock, another in jam-band territory, and a third eye in metal (they even occasionally bring out an awkward rap track), the band has become one of the biggest festival draws. The band's diehard following came out strong Saturday night for the first of King Gizz's back-to-back Florida debut shows and one night after performing at Bonnaroo.

The show began with the thrash-metal sounds of "Self-Immolate," which saw singer and guitarist Stu Mackenzie shredding his retro 1980s guitar over the top of his head while neon fluorescent screensaver images pulsated behind the band. King Gizzard later got into bluesier, slow-jam territory with "Ambergris" and even found an excuse to toot from a flute during "Trapdoor." 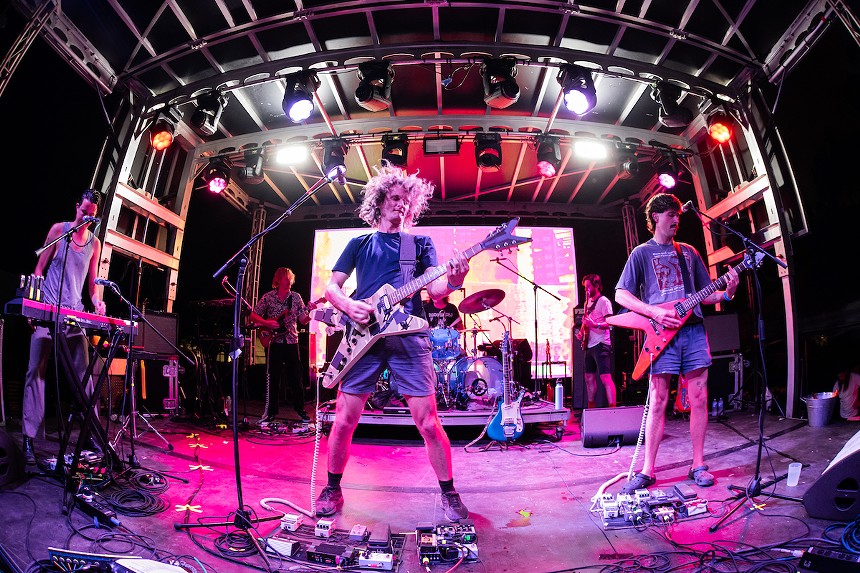 King Gizzard & the Lizard Wizard's performance was as eclectic as the band's name.
Photo by Adinayev
The sextet has released an insanely wide variety of music, but the improvisational nature of King Gizzard's performance makes it seem as if the songs flow from one into the next — to the point where early on in Saturday night's set, it was hard to tell where one song began and the other ended. As "Self-Immolate" became "Predator X, which turned into "Gaia," it all felt like one freaky 20-minute electric jam.

The crowd was enthusiastic about the unconventional song structures, moshing and crowd surfing up front and dancing further back, inspiring guitarist Cook Craig to muse aloud, "Honestly, why has it taken us long to come here? Everyone skips Florida."

The queue for the merch table to buy records, posters, and shirts remained long throughout the evening, making you wonder whether they were giving something away for free. Tickets for the concert sold out so quickly that the band added a Sunday show. Still true to the venue's name, even at capacity Space Park didn't feel close to overcrowded on Saturday night. There was plenty of "space" to sit down on the grass and bliss out at the heat lightning flashing in the sky and the electric thunder that was blowing out of the amps.

There's a tongue-in-cheek quality to King Gizz's music. The band goes all in on the silliness and cheese, barely winking at lyrics like, "Oh baby, I got persistence/Keep pushing like the Ford motor pistons."

Despite the sold-out crowd, Space Park provided ample room to spread out.
Photo by Adinayev
King Gizzard ended its hour-and-a-half set on "Rattlesnake," the band's ode to the deadly reptile, with Atari-esque computer graphics blipping and blooping on the screen behind them. After the final note, Mackenzie waved, blew kisses to the crowd, and said, "We'll see you tomorrow night."