Gustavo Matamoros' "Eggstravinsky" is the first episode in a four-part listening series at Books & Books. The segment explores the musical influences of modern music on 1970s progressive rock and focuses on the compositions of English prog-rock band Egg and Russian composer Igor Stravinsky; hence the title. The discussion will highlight the use of asymmetric and multimetric rhythms in music that allows sounds to feel less redundant and more surprising. 7 p.m. Monday, at Books & Books, 265 Aragon Ave., Coral Gables; booksandbooks.com. Admission is free with RSVP via eventbrite.com. Ashley-Anna Aboreden

Let's get jazzy! Andrew Amengor serves as this month's resident at Shirley's Jazz Jam at Gramps. Amengor is a graduate of Florida International University's School of Music and performs regularly at venues across South Florida. If you're in the mood to jam out yourself, bring an instrument — audience members are welcome to join in after the performance. 9 p.m. Monday, at Gramps, 176 NW 24th St., Miami; gramps.com. Admission is free. Ashley-Anna Aboreden

Hip-hop act EarthGang stops at Revolution Live on the heel of the release of its latest album, Ghetto Gods. Consisting of members Johnny Venus and Doctor Dot, the duo first made landfall after releasing the EP The Better Party in 2010. The group's sound is a combination of funky, soulful sounds mixed with Southern hip-hop. In 2015, EarthGang caught the attention of J. Cole, leading the twosome to sign with his record label Dreamville Records and collaborate on the single "Sacrifices." Tuesday's openers are Mike Dimes and Pigeons & Planes. 7 p.m. Tuesday, at Revolution Live, 100 SW Third Ave., Fort Lauderdale; 954-449-1025; jointherevolution.net. Tickets cost $30.50 via ticketmaster.com. Sophia Medina

It's Pride Month, and Vizcaya Museum & Gardens is hosting a special Pride edition of Vizcaya Late. The grounds of the historic mansion are open to the public as the sun goes down, with music by the French Horn Collective serving as the dusky soundtrack. Guests can also choose to make banners for the New Orleans Second Line-style parade through the gardens. 6 to 9 p.m. Wednesday, at Vizcaya Museum & Gardens, 3251 S. Miami Ave., Miami; 305-250-9133; vizcaya.org. Tickets cost $10 via eventbrite.com. Ashley-Anna Aboreden

Did you know Miami had another pro soccer team? Part of the USL Championship (the second tier of the U.S. professional soccer system), Miami FC started in 2016 and calls Riccardo Silva Stadium home. On Wednesday, the team faces off against Indy Eleven. Currently standing in sixth place in the Eastern Conference, the team has a long way to go if it wants to replicate a three-year championship run that started in 2018. 6:40 p.m. Wednesday, at Riccardo Silva Stadium, 11310 SW 17th St., Miami; miamifc.com. Tickets cost $6.50 to $12. Ashley-Anna Aboreden

Step into a retro Polynesian paradise when the Hukilau returns on Thursday. At the Beachcomber Hotel & Resort in Pompano Beach, guests are welcome to have a taste of tiki heaven with drinks served by Dirty Dick, Tonga Hut, Hidden Harbor, Three Dots and a Dash, and more. The event also delivers live music performances by the Surfrajettes, the Manakooras, and the Intoxicators, and various symposia that center on the tiki lifestyle. You can even browse the Tiki Treasures Bazaar for goodies to take home. Thursday through Sunday at the Beachcomber Resort & Club, 1200 S. Ocean Blvd., Pompano Beach; 954-941-7830; thehukilau.com. Tickets cost $129 to $529. Sophia Medina

GableStage artistic director Bari Newport continues her inaugural season with a staging of Joan Didion's memoir The Year of Magical Thinking. The one-woman play invites the audience to step into Didion's traumatic experience. Based on the concepts of loss and grief, the play focuses on the heartbreaking moment the author lost both her husband and daughter. Published in 2005, The Year of Magical Thinking has been acclaimed as a classic about mourning; it won the National Book Award for nonfiction and was a finalist for a Pulitzer Prize. 7 p.m. Thursday through June 26, at GableStage, 1200 Anastasia Ave., Coral Gables; 305-445-1119; gablestage.org. Tickets cost $55 to $60. Sophia Medina

It's once again time to deck yourself out in your best Pride lewks. Wynwood Pride may be a few years old, but it has already cemented its status as a must-attend June event. This year's musical lineup includes performances by Marina (FKA Marina and the Diamonds), Azealia Banks, Cupcakke, and Slayyyter. Also on the bill are drag performances by Rupaul's Drag Race winner Violet Chachki and fan favorite Gottmilk. The musical festival takes place over two days, with a neighborhood takeover occurring on Sunday as local businesses stage special LGBTQ+ programming. 5 p.m. to 3 a.m. Friday and noon to 3 p.m. Saturday, at the RC Cola Plant, 550 NW 24th St., Miami; wynwoodpride.com. Tickets cost $50 to $150 via tixr.com. Ashley-Anna Aboreden

If you have fond memories of watching the laser-light shows at the old Miami Science Museum near Vizcaya, you'll be happy to hear that just because the museum got bigger and better digs, the shows go on. If fact, now you can make a night of it on Friday when the Phillip and Patricia Frost Museum of Science hosts Laser Evening. The planetarium has scheduled five back-to-back shows, starting with the family-friendly Symphony of the Stars at 7 p.m. with presentations focusing on Jimi Hendrix, Prince, Radiohead, and Pink Floyd's The Wall to follow through the evening. 7 p.m. Friday, at the Philip and Patricia Frost Museum of Science, 1101 Biscayne Blvd., Miami; 305-434-9600; frostscience.org. Tickets cost $8 to $10 per show. Sophia Medina

Not that you need an excuse to perreo, but now you can perreo for a cause. On Saturday, the Florida Latina Institute for Reproductive Justice hosts Un Perreo Combativo at Club Típico Dominicano. The event deploys the Afro-Latin dance of perreo as a form of resistance, as a way of standing up for reproductive rights. Those who wish to attend need only show proof of donation to one or more of the following organizations: Florida Access Network, Women's Emergency Network, Southern Birth Justice Network, and Las Mingas de Aborto. You can also donate via Eventbrite. 7 p.m. Friday, at Club Típico Dominicano, 1344 NW 36th St.;  305-634-7819; clubtipicodominicano.com. Admission is free with a donation, via eventbrite.com. Ashley-Anna Aboreden 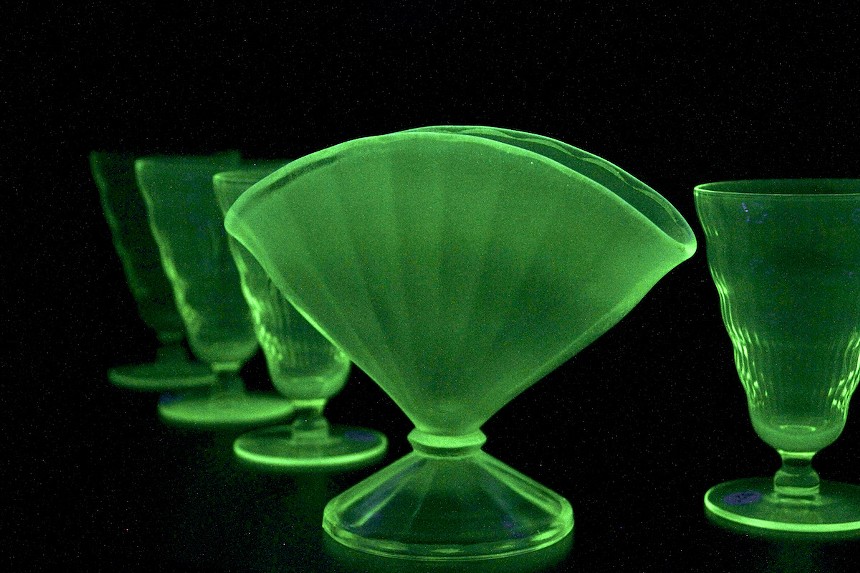 "Cara Despain: Spectre" at the Bass: See Saturday
Photo courtesy of the Bass

Through the use of videos, a spectacle of vintage glowing glassware, and other elements, Cara Despain explores the development of nuclear weapons in "Specter," the Bass' latest exhibition. The show highlights how domestic uranium was common before nuclear weapons, the muted history of testing and uranium mining, and the constant specter of nuclear war. Through historical context, "Specter" serves as a haunting reminder of the obscured history and hidden injustice buried within the legacy of the Cold War. A native of Salt Lake City, Despain lives and works in Miami. Her work is included in the Rubell Museum, the Scholl Collection, and the Miami-Dade County and Miami International Airport art collections. Noon to 5 p.m. Saturday through September 18, at the Bass, 2100 Collins Ave., Miami Beach; 305-673-7530; thebass.org. Tickets cost $8 to $15. Ashley-Anna Aboreden

The Goombay Festival makes its long-awaited return to celebrate Bahamian culture. This year's festival queen is U.S. Rep. Frederica Wilson, who is of Bahamian descent. The fete includes performances by Mr. Julien and DJ Selector Chronic. In addition to the music, there will be junkanoo performances, as well as vendors serving authentic Bahamian cuisine. 1 to 8 p.m. Saturday and Sunday, at Elizabeth Virrick Park, 3255 Plaza St., Coconut Grove; miamigov.com. Admission is free. Sophia Medina

If you're unfamiliar with YouTuber and podcaster Kurtis Conner, you're likely of a certain age, and this event probably isn't for you. But for Gen Z and on-the-cusp Millennials, Conner is one of the funniest people on the internet. The Canadian comedian's delivery tends to be very dry and he has made an entire career out of commenting on internet culture. On Saturday, Conner stops at the Broward Center for the Performing Arts as part of his 2022 tour. Here's hoping he still makes time to post content on YouTube. 7 p.m. Saturday, at Broward Center for the Performing Arts, 201 SW Fifth Ave., Fort Lauderdale; 954-462-0222; browardcenter.org. Tickets cost $40 to $75 via ticketmaster.com. Jose D. Duran 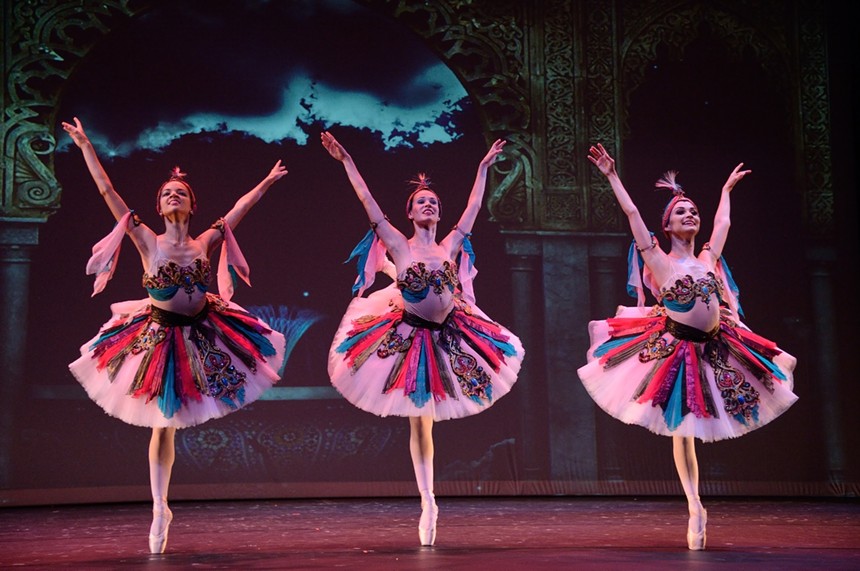 Cuban Classical Ballet of Miami at Miami-Dade County Auditorium: See Saturday
Photo courtesy of Cuban Classical Ballet of Miami
Swifties report to Gramps on Saturday for Cruel Summer, a Taylor Swift-inspired dance party. Guests are welcome to sing and dance their hearts out on the dance floor as they listen to hits like "22," "Trouble," and "Shake It Off." The event is produced by Le Petite Fete, the Orlando-based party promoter that regularly hosts dance parties around Swift, Harry Styles, Britney Spears, Olivia Rodrigo, and others of that ilk. 7 p.m. Saturday, at Gramps, 176 NW 24th St., Miami; 855-732-8992; gramps.com. Tickets cost $20 via eventbrite.com. Sophia Medina

On Saturday, catch the Cuban Classical Ballet of Miami's presentation of Le Corsaire Suite. The local ballet company will highlight excerpts from one of the most evocative classical ballets of the 19th Century. The show's a libretto based on Lord Byron's poem "The Corsair" and was originally choreographed by Joseph Mazilier to the music of Adolphe Adam in Paris in 1856. The ballet is full of sultans, maidens, princesses, and pirates, which is to say: Prepare for a visual delight. 8 p.m. Saturday, at Miami-Dade County Auditorium, 2901 W. Flagler St.; 305-547-5414; miamidadecountyauditorium.org. Tickets cost $35 to $65 via ticketmaster.com. Ashley-Anna Aboreden

On Sunday, O Cinema South Beach screens the Tim Burton fan favorite Beetlejuice in partnership with the Wolfsonian-FIU. The 1988 fantasy-comedy film stars Winona Ryder, Geena Davis, Alec Baldwin, Catherine O'Hara, and Michael Keaton. The movie, which was a critical and commercial hit, has matured into a cult classic. After the screening, stay for a discussion on the "haunted house" theme and how it became a mechanism through which we view the inner spaces of society. 4 p.m. Sunday, at O Cinema South Beach, 1130 Washington Ave., Miami Beach; 786-471-3269; o-cinema.org. Tickets cost $7.50 to $11. Ashley-Anna Aboreden