Photo by Megan McCluer
Isabella Acker sits in her Tigre Studios office.
Camouflaged amid the concrete jungle near the railroad tracks in Little River is an intimate studio space where magic is brewing. On the second floor of an otherwise ordinary building is Tigre Den Recordings, a musical hideout that mixes rhythm and soul.

Here the walls are covered in vintage-inspired posters announcing the names of bands and singers who've performed at Tigre Den Recordings. Artificial moss hangs from the ceiling, and plenty of green plants help to tie the room together. Previously lit candles are grouped in the corner.

The record label, recently launched by Isabella Acker, was a natural progression for the music industry veteran. Acker, who founded her creative agency Prism Creative Group in 2015 and later launched Tigre Sounds in 2021, is embarking on a new adventure that combines all her passions.

Tigre Den (also referred to as Tigre Studio) organically emerged from Acker’s previous pet project, Tigre Sounds. The latter started as a way for her to carefully curate music from global artists and share their music via a playlist on Spotify and on social media. Acker describes Tigre Sounds as a “musical discovery for citizens of the world.”

Tigre Den, on the other hand, is where the real magic happens.

Early last year, Acker began to invite friends to her office space to listen to live music. The private jam sessions grew, and she soon found herself producing small-scale events and swapping out the set for each artist. She recorded each live-music moment, it was only a matter of time before she found herself with a collection of unique recordings and an itch to share them.

“Truly, I had so many fears around launching a label,” she admits. As she speaks, Acker twirls a piece of string in between her rings. She leans further into her couch’s armrest. “I feel like [with Tigre Den] I’m true partners with the artists in a way that they do what they do best, and I can bring my best gifts and talents to be able to co-create something really special.”

The warm vocals of Gaiya singing a cover of Natalia Lafourcade’s “Tú Sí Sabes Quererme” spill from a nearby speaker. The soft, sensual plucking of the guitar strings swirls like a cloud of smoke, then disappears. Acker closes her eyes for a moment and sways.

Over the past decade, Acker has touched almost every facet of the music business — everything from artist management to music marketing to programming to talent buying. “I’ve sat in a lot of different spaces in the music industry,” she says with a chuckle. “I’ve found that the space where I feel most aligned with is curating.” 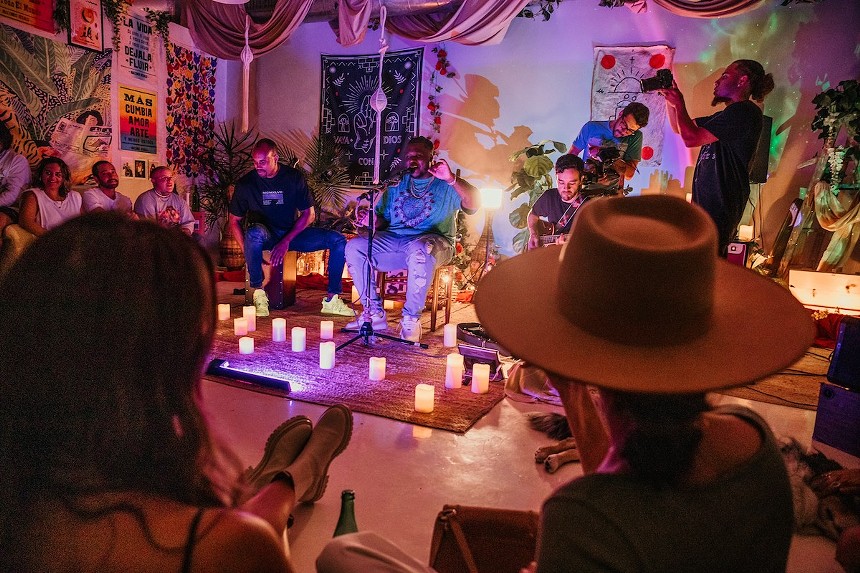 An intimate jam session turned live recording session inside Tigre Den
Photo by Gabrielle Peige
Acker’s goal with Tigre Den is to build a space where artists feel safe to experiment with sounds and interact with other musicians in unique ways. Tigre Den Recordings expertly fuses local and international musicians and invites them to step onto an intimate stage and make music together.

“I think it’s really cool to do a little bit of musical matchmaking with emerging artists from around the world and team them up with Miami musicians," she elaborates. "We’re leading with the kind of bridge-building music we’d love to see.”

Unlike a traditional label, Tigre Den doesn’t represent individual artists or bands. Instead, the listening sessions are recorded and shared by the label as a live studio track. “We’re not looking to exclusively represent anyone,” Acker says. “We’re just looking to create really beautiful recordings and create fusions between artists outside of Miami with Miami’s music scene.”

She hopes that when international artists come to tour North America, Tigre Den will be their first stop — a “must-play, must-record kind of space,” as she puts it.

“World music is really the space we’re trying to be in,” Acker says. “There’s such a cultural richness in what’s happening around the world, and if we can fuse that with Miami sound, it’s a huge opportunity to put Miami on a much larger microphone and a bigger platform.”

As of this writing, the label has released live singles from Yoli Mayor (“Malamente,” a Rosalía cover), Gaiya (Lafourcade’s cover), and Tonina (“Qué Lío,” a Héctor Lavoe and Willie Colón cover, and an original song titled “Ruben”).

New recordings are released periodically via Tigre Den’s Spotify channel. Acker and her team are working to build out a proper studio for recording sessions. “Taking the step from just releasing content to releasing recordings has been a big change in our ability to really help solidify [Tigre] being a platform that can live beyond Miami,” she says, then adds, “We’re just getting started.”