Photos courtesy of Rawsi Williams, Miami Police Department
Attorneys say Antwon Cooper (left) was unarmed when a Miami police officer shot him "execution-style" during a traffic stop in Liberty City on March 8, 2022.
It has been nearly two months since a Miami police officer fatally shot 34-year-old Antwon Leonard Cooper during a routine traffic stop in Liberty City. At a news conference two weeks after the incident, Miami Police Chief Manny Morales explained that "the officers became aware that one of the individuals was armed, a struggle ensued, and one of the officers discharged his firearm."

Earlier this month, the Miami Police Department (MPD) released body-worn camera footage of the interaction between Cooper and the unidentified male officer who pulled him over. It shows a scuffle between Cooper and the officer beside a red Nissan Altima before the body-worn camera falls to the ground and, seconds later, the sound of a single shot can be heard being fired outside of the camera's view. During that time, another officer — whom the Miami Herald identified as Sgt. Constant Rosemond — reportedly intervened and shot Cooper at close range.

For the family and its attorneys, Rawsi Williams and Frank T. Allen, the body-worn camera footage of that three-minute exchange has generated more questions than answers about what Williams describes as an "execution-style shooting." They want to know why Cooper was stopped in the first place, why a Taser was not deployed, and the source of the handgun recovered from the scene.

Moreover, an online petition and a fundraising page launched on behalf of Cooper's family state that Cooper was "unarmed." On April 4, the attorneys sent Miami police a pre-suit notice alleging the department had released "misleading, if not false information" about the events leading up to Cooper's death, including that he had a gun and that there was "an exchange of gunfire" between Cooper and the officers.

"He never pulled a weapon — and when I say 'a weapon,' I mean any type of weapon. Police keep saying 'gun' because it's a red-herring distraction to detract from the fact that this officer shot and killed an unarmed man," Williams contends. "[The MPD] has changed their story multiple times regarding their sergeant's execution-style shooting of unarmed Mr. Cooper in the head like a dog in the streets."

The family, Williams says, intends to file a wrongful-death lawsuit in state and federal court arguing that Cooper posed no threat to police and the shooting was unjustified.

"His entire life lived and future life awaiting has been snuffed out by Miami PD," states the April 4 letter from attorneys Rawsi Williams and Frank T. Allen (attached at the end of this story). "Ashes to ashes, dust to dust, he is gone." The Florida Department of Law Enforcement (FDLE) is investigating the shooting. An MPD spokesperson did not respond to New Times' request for comment.

On the afternoon of March 8, 2022, Cooper was driving near Miami Northwestern Senior High School when he was pulled over. (The Miami Herald reported that Cooper was pulled over for an expired temporary tag, but Williams tells New Times police told her there was a "problem" with Cooper's tag and couldn't cite the exact issue.)

When Cooper couldn't provide his driver's license to the unidentified Miami police officer, the officer asked Cooper to step out of the vehicle and began patting him down. Then, according to the body-camera footage, the officer shouts "gun" and Cooper appears to try to run away. For several seconds, the footage is shaky as Cooper and the officer engage in a brief struggle before a gunshot is heard. Another officer (presumably Sgt. Rosemond) then appears in the top corner of the frame, seeming to walk toward Cooper with gun drawn.

"We got shots fired," the unidentified officer reports into his walkie-talkie seconds later.

While a handgun was reportedly found at the scene several feet away from where Cooper was shot, Williams tells New Times she doesn't know whose gun it is, nor where it came from. She maintains that the only person who drew a gun during the encounter was the sergeant who showed up at the scene and adds that the department has changed its version of events a number of times regarding where the weapon was found. 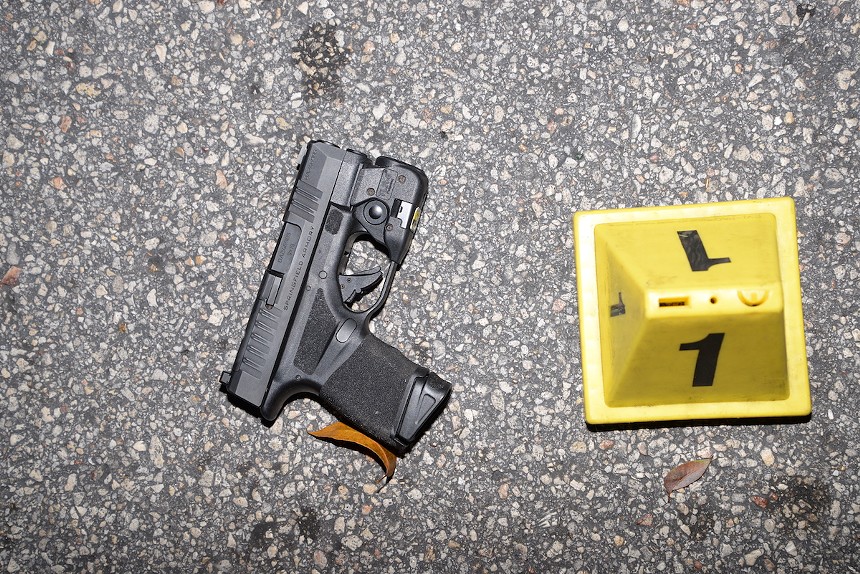 The handgun police recovered from the scene
Photo courtesy of Miami Police Department
"Even if the gun on the scene actually found/located several feet away from the actual location where the Sergeant shot and killed Mr. Cooper is identified to belong to Mr. Cooper, the fact remains true that no gun or any weapon was in Mr. Cooper’s possession nor hands when the Sergeant shot him in the head at close range and killed him," the pre-suit letter states.

"Every time the police show [the handgun], you notice they never show its location on the scene," Williams says, referring to the Miami police evidence photo of the gun on the pavement. "They just show a picture of a gun."

While the incident was partially caught on the unidentified officer's body-worn camera, the officer who is believed to have fired the shots was not wearing a body camera at the time.

This isn't the first time a routine traffic stop by MPD officers turned deadly. In 2011, Travis McNeil was killed by an MPD officer while he was reaching for what was later said to be a cellphone in his parked car. No gun was found in the car. The year prior, a Miami officer shot DeCarlos Moore in the head during a traffic stop after the unarmed 36-year-old reached into his car and grabbed a foil pouch of crack rocks that "could have been mistaken for a gun."

Earlier this month, a handful of Cooper's loved ones gathered near the scene of his killing to protest with brightly colored posters reading "No justice, no peace" and "Justice for Antwon."

Cooper's case has received significantly less attention than other similar officer-involved fatalities, such as the deaths of Philando Castile in Minnesota and Sandra Bland in Texas, which garnered national attention, protests, and caused the hashtag "#DrivingWhileBlack" to trend.

Initially, Williams says, the family asked the community to give law enforcement time to complete a fair investigation into the fatal incident, emphasizing that they didn't want to see a "violent response."

"We've been cooperative and patient, but our patience is wearing thin and so is the patience of the community," Williams says.

Williams suggests the lack of national outrage might be attributed to the fact that the officer who allegedly shot Cooper is Black. (According to Sgt. Rosemond's LinkedIn profile, he has been an MPD officer for the past 15 years and previously worked with the United Nations as a civilian police officer in Haiti.)

"The Black community is having to come to terms with that," Williams says. "Usually, in these cases, what we see is a white police officer."

The color of the officer's skin makes no difference to Williams, who says she will "go after" Rosemond the same way she would with any other police officer she believes has unjustly killed a civilian. She emphasizes that Cooper's family not only wants the officer fired, but criminally charged.

"This sergeant does not get a pass because he's Black," Williams maintains. "We fight for #JusticeForAntwonCooper."