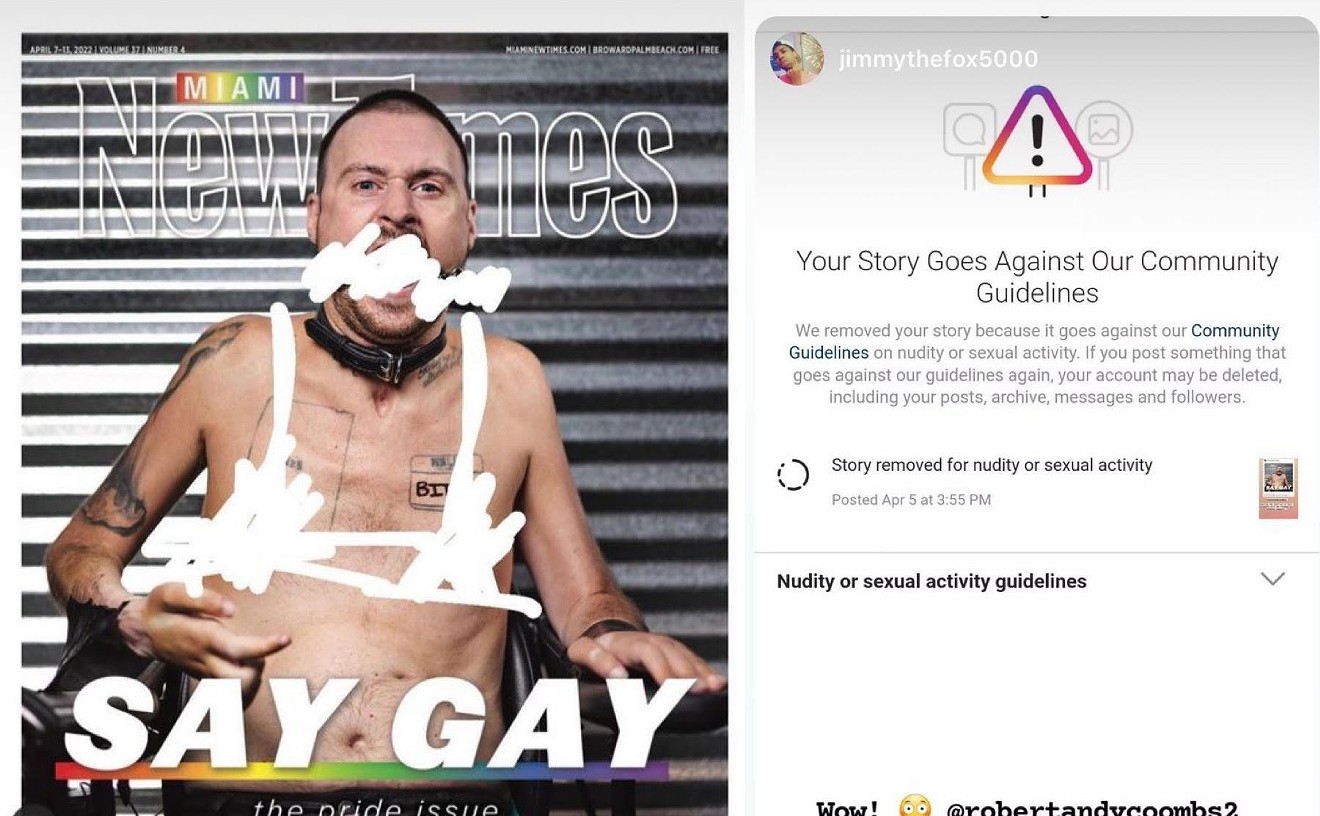 Screenshots via @RobertAndyCoombs2/Instagram
On Tuesday, New Times published "CripFag," a profile of Robert Andy Coombs a Miami-based artist whose photographs explore the intersection of disability, queerness, and sex. The story is featured on the cover of this week's issue, which coincides with the Miami Beach Pride festival taking place April 1-10.

The cover, designed by Kristin Bjornsen, shows an image from Coombs' "CripFag" photo series. It shows Coombs, who was paralyzed in 2009 as a result of a spinal-cord injury, seated shirtless in his wheelchair, with a ball gag in his mouth. His tattoos are on full display, as are his nipples. The headline reads, "Say Gay," an allusion to the controversial — and likely unconstitutional — "Don't Say Gay" bill that was recently passed by Florida's legislature and signed into law by Gov. Ron DeSantis. The bill, slated to go into effect July 1, bans instruction involving gender and sexual orientation for many young students.

In the story, Coombs speaks about his ongoing frustration with Instagram for censoring his work, which often depicts sex and nudity.

"It's an ongoing thing. [Instagram] pats themselves on the back for being a creative outlet," Coombs told New Times. "But when it comes specifically to queer, disabled, or people of color, we're constantly being banned and silenced, and our content is getting flagged and deleted."

Coombs' quote proved to be prophetic.

Within hours after the story was published online, at least ten readers who shared the cover image on Instagram stories reported having their posts promptly taken down by Instagram for violating the platform's "Community Guidelines on nudity or sexual activity."

Instagram states that it bans "photos, videos, and some digitally-created content that show sexual intercourse, genitals, and close-ups of fully-nude buttocks...[and] some photos of female nipples."

New Times' cover doesn't show any of those things.

Meta, which owns Facebook and Instagram, has not returned New Times' request for comment Wednesday morning, seeking clarification as to why the cover image purportedly violated the community guidelines.

Readers valiantly proclaimed their opposition to Instagram's censorship of the cover — and, by extension, of Coombs' work — by sharing screenshots of their takedown notifications.

"Why is the world so offended by the nude disabled form?" commented one user with their screenshot. "Because I chose to share a truly motivational and honest depiction of another brilliant and talent disabled artist the story was band [sic]?!"

Screenshots via @RobertAndyCoombs2/Instagram
"Silencing the brilliant work of @robertandycoombs2. I'm so angry about this 'inclusive' environment @Instagram claims to have," wrote another. "This work is really important as #DontSayGay issues are going on!!!!!!!"

Screenshots via @RobertAndyCoombs2/Instagram
"Fuck censorship of disabled people," wrote a third, with a crudely edited version of the cover Coombs' ball gag and nipples blanked out. "this is ableism not being able to post and congratulate @robertnadycoombs2."
click to enlarge

"We're in the free-expression business," says New Times editor-in-chief Tom Finkel, "and I'm quite familiar with the pitfalls involved. In this instance, as in most, context is everything. Not only is there no 'nudity or sexual activity' depicted here, but the context clearly indicates to anyone with a human brain that the image is a political statement, not pornography."

Instagram allows users to "appeal" the removal of their content, and at least two users successfully reposted their stories featuring the Coombs cover.

But the damage, Coombs says, "is already done."

For early-career artists such as Coombs, Instagram is an important platform to showcase one's work in the hopes of attracting the eyes of collectors and curators.

And Coombs is all too familiar with Instagram and censorship. He estimates that scores of images of him and his work have been removed from his profile over the years. He theorizes that he's being "shadowbanned" — a reference to Instagram's alleged practice of deprioritizing certain accounts in its algorithms if they repeatedly violate its guidelines.

To get around the bans, Coombs has gotten creative, censoring nudity with playful emojis or stickers of parent company CEO Mark Zuckerberg's face.

But Coombs says posts that do not depict any nudity or sex — including an image of a man sitting on Coombs' lap in his power wheelchair — still get taken down. So he started adding a black text block over his images that reads, "Instagram stop censoring and erasing my queer disabled body!"

"I cover everything up, then Playboy puts the teeniest pixel over the women's nipple, and showing her full breast, and that's fine. Instagram just wants to see tits and ass everywhere," Coombs tells New Times. "When it comes to showing any other proof of people, they just don't want to see it or deal with it, and just silence it."

(New Times is unable to embed Coombs' Instagram posts. Even though the posts are on his profile, an error message states that "the link to this photo or video may be broken, or the post may have been removed.")