Photo courtesy of Bottled Blonde
Bottled Blonde offers a party atmosphere in a sports bar.
At first glance, month-old Bottled Blonde Pizzeria + Beer Garden could pass as just another trendy new import to make its way into Miami over the course of the past year.

Located off 29th Street just west of where Wynwood traffic begins to thicken and slow, its open layout with a massive center bar — flanked by 49 HDTV monitors, 24-foot projector walls, and a whimsical pin-up girl installation — feels like the sports bar Wynwood didn't know it needed. It's an ambiance that beckons anyone walking past to stop and consider grabbing a drink or perusing the menu.

Do that and you’ll see it’s the type of place where you can order chicken wings, a caesar salad, or pizza priced between $14 and $22, dishes that pair well with your choice of a cold beer or cocktail for $8 to $18 or so.

Arrive later in the evening, however, and it’s also the type of place where you can spend the equivalent of a year’s college tuition on bottle service with a show.

The Arizona-based venue is one of more than a dozen out-of-state imports to target Wynwood as its newest frontier. Founded by husband-and-wife team Les and Diane Corieri, the concept — which boasts locations scattered across Texas and Arizona — embodies the couple’s version of a “high-energy” establishment that offers up a sports bar, Italian-themed lunch and dinner menus, and a late-night venue under one roof.

Natives of Iowa, the Corieris opened their first bar in a small college town in the late 1970s. Having taken a taste of the hospitality industry, they opened their first nightclub-inspired venue after relocating to the Phoenix suburb of Tempe in 1985.

Over the course of the next decade, a string of two dozen nightlife and dining establishments followed — among them Jetz, Stixx, and Axis nightclub — places the couple say helped the once-sleepy section of Old Town Scottsdale to liven up.

The concepts thrived through the '90s and early 2000s, but a wave of change took hold around 2010, slowing business as Las Vegas nightclubs began promoting big-name artists to their venues just 30 minutes away, Les tells New Times.

"We noticed the larger nightclubs were becoming DJ-driven, and it was too expensive to compete with that," says Les. "So we decided to come up with a fun concept that was indoor/outdoor with a more casual atmosphere but still offered that late-night energy."

In 2014, the couple opened the first Bottled Blonde in Scottsdale. Les says it was his own vision of a casual sports bar that could transform into an upscale nightclub, a format he’s since expanded into several locations, including Miami, with Nashville and Las Vegas up next.

Over the years, Bottled Blonde has remained true to its original vision, offering subtle "breastaurant" vibes earlier in the evening before transforming into a high-energy nightclub. To wit: Come 11 p.m., a 15-minute makeover transforms the 9,000-square-foot space from cropped tank top- and cutoff shorts-clad servers overseeing picnic-style dining into VIP booth lounges where Miamians can drop up to $9,500 on "Star Wars," Pokémon, and Ghostbusters-themed bottle service. If those prices seem tame, one of several bottle liquor packages comes with a $23,000 price tag. 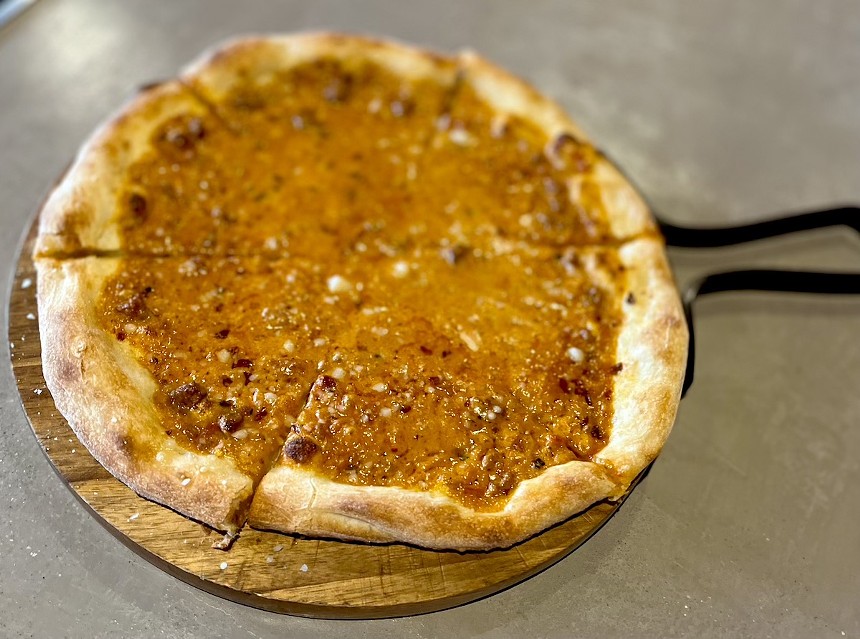 Vodka pizza at Bottled Blonde
Photo by Nicole Danna
In March, New Times noted the arrival of a troupe of lingerie-clad young women — propped atop mini motorcycles hoisted into the air by a team of male servers — at Bottled Blonde. Carousing and cheering their way through the restaurant, neon lights strobing the beat of the music, it appeared as though this was what Bottled Blonde is all about.

And maybe that's alright. While the concept didn’t go over too well in a quiet Chicago neighborhood, it seems perfectly suited to Miami, where bottle service of this sort is typically relegated to the fee-restricted reaches of high-end nightclubs like LIV and Story.

Now, since Bottled Blonde has arrived, anyone can enjoy the show — even with a pizza slice and beer in hand. And if the pricey bottle packages aren't your style, the experience continues with $100, 100-ounce mimosa towers for weekend brunch, served in a yard-long glass. If not that, then certainly the $17 Adult Capri Sun, an adult-sized, Bottled Blonde-branded drink pouch filled with Tito's-spiked strawberry and banana juice that manages to taste surprisingly like the real thing.

And what about the food? By day, for lunch and dinner or late-night, Bottled Blonde strays from the trope of sports-bar fare with its short-and-sweet selection of antipasti, pizza, salads, and sandwiches. Topping the list of favorites: the vodka pie, a marriage of cream-spiked red sauce flecked with prosciutto, red chili, and Parmesan cheese ($16). While a simple sauce-only topping might sound off at first, it works, and the only true oddity is how a rich, slathered layer of it manages to perch neatly on each slice.

But the crispy chicken sliders ($19) are a must-try here. It's rumored Rob Gronkowski once ate 72 in one sitting, and this is why: They're tender and moist beneath a crispy shell, compliments of a well-timed brine. and ranch-seasoned breading. Sandwiched between twin fluffy tufts of sweet Hawaiian roll, they need nothing more than a few pickle slices and dollop of the chef's own "secret" sauce as sidekicks.

So, is Bottled Blonde a casual sports bar — or a nightclub? The answer is both. It's a chill place to grab a few beers and watch the game in the afternoon, or a lively spot to celebrate a raucous birthday come nightfall. And it's about time the everyman had a place to plunk down a few grand on bottle service if the evening calls for it.