But now that both offices have "outgrown" their current locations, Broward County has announced the Broward County Forensic Science Center, a new "state-of-the-art" forensics and criminology facility slated to open in 2026 that would bring both offices under the same roof. The City of Fort Lauderdale Police Department also plans to build a police substation on the property. It's believed to be the first time police and medical examiners' staff will work in the same building in South Florida.

In the recent legislative session, the county asked lawmakers for more than $3 million, though the total price tag is ballparked at $210.5 million. The new forensic center is a pricey endeavor, but also an unpopular one: It's unclear where the new building will be located; original plans to build the facility on county-owned land in a historically Black community in Fort Lauderdale were scrapped in October 2021 following residents' fierce opposition to the prospect of having dead bodies shuttled in and out of their neighborhood.

But critics of the new forensic center are also concerned that a joint facility could lead to conflicts of interest — particularly when it comes to investigating deaths of people while in police custody. A 2011 survey by the National Association of Medical Examiners found that 22 percent of pathologists have experienced pressure from political officials to alter findings in an investigation.

In an opinion piece published in the Washington Post in 2020 Justin Feldman, now a public health researcher at Harvard University's FXB Center for Health and Human Rights who studies police violence and medical examiners, wrote that there's been evidence of police pressuring medical examiners to minimize blame when investigating deaths in police custody and a real need for more independent medical examiners and coroners.

"We found that coroners and medical examiners throughout the United States routinely report findings that minimize the responsibility of police," he noted in the op-ed, describing a study in which he and his fellow researchers "identified 71 people who died in police custody after they had been subject to a Taser shock, chokehold or other form of restraint; after being transported in a police vehicle; or after being denied water while in detention. Medical examiners and coroners determined that only 24 of those people lost their lives because force was applied to them."

"This is, at the very least, a signal to the public that they are not trying to create independence between the death investigation process and law enforcement," Feldman says. "Those processes should be separate from each other." 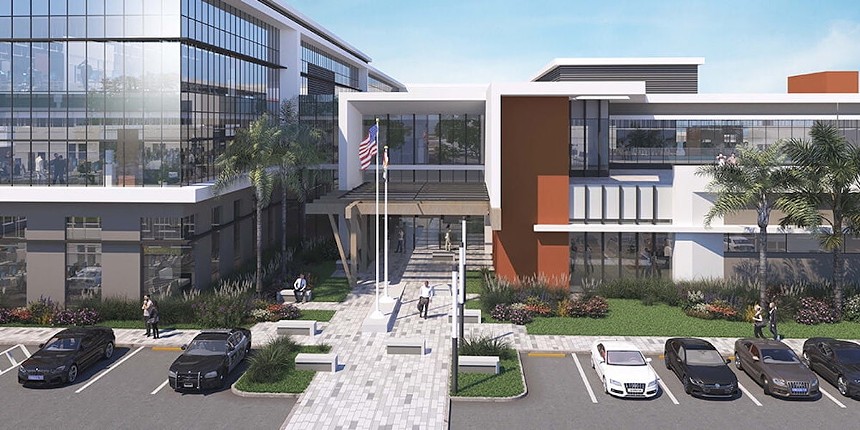 The new forensic science center is estimated to cost $210.5 million.
Rendering courtesy of Broward County
It's standard for medical examiners and law enforcement to collaborate on death investigations — but only to a certain extent.

The standards of the National Association of Medical Examiners state that coroners and medical examiners “must investigate cooperatively with, but independent from, law enforcement and prosecutors," in order to allow "neutral and objective medical assessment" of a person's cause and manner of death.

Florida, in particular, has encountered issues in the past with medical examiners developing alternative explanations for deaths in police custody, Feldman says. The most notable cases, he explains, involve the presence of "excited delirium," a controversial condition the American Medical Association (AMA) opposes as a diagnosis and one that AMA president Gerald E. Harmon, M.D., said last year "[has] been misused during law enforcement interactions and outside of medical settings – a manifestation of systemic racism that has unnecessarily dangerous and deadly consequences for our Black and Brown patients.”

According to a 2020 Florida Today investigation, two-thirds of deaths Florida medical examiners determined were caused by "excited delirium" involved people who were in custody or interacting with law enforcement in other settings.

"There's a whole world out there of medical researchers and technologists who try to develop alternative explanations as to how people who died in police custody died in ways that had nothing to do with police," Feldman says. "So yeah, there's a lot under the surface."

In response to questions about the potential conflicts of interest between the two offices at Broward County's forensic science center, Broward County spokesperson Gregory Meyer tells New Times that the merger will help "streamline collaboration" between BSO and the medical examiner's office. He says the two agencies will "remain independent entities" and that "each have their own dedicated space within the building."

"We do not see a conflict of interest between the two agencies," Meyer wrote in an email to New Times. "Both offices have an extremely high level of professionalism and accountability."

"The conflict of interest already exists right now, even if they're not merged," the researcher says. "But physically merging the facilities would be a step even further."