Photo by Joe Blandon @thesleepingsparrowphoto
Coachella or the Fair?
The Miami-Dade County Fair and Exposition, AKA the Fair, is back for its 70th year, and Miamians are ready. Bring on the nostalgic bliss of stuffing your face with various fried foods, waiting in long lines, riding the Mach 3 or Ring of Fire until you're nauseated, and playing that carnival game until you win the prize.

Make sure to add to that list dancing, singing along, and jamming out. This year, Backroom Sessions is partnering with the Fair again to bring live music to fairgoers with a jam-packed multigenre lineup of over 100 bands and artists that will perform across two stages at the fairgrounds from March 17-April 10.

The announcement comes only two months after Backroom Sessions celebrated its fifth year functioning as an ever-growing hub for Miami music. Though its fourth year partnering with the Fair might be one of the event promoter's largest productions yet, Backroom Sessions is no stranger to showcasing talent across the 305.

Founded in 2016 by Angelina Rivero and Bause Mason, Backroom Sessions started as a series of events featuring poets, musicians, and artists of all genres and mediums. After selling out their first few shows at the Fish House, a restaurant and popular jazz venue owned by Rivero's parents, the pair started branching out with other event series such as Acoustic & Poets and the rock-based Soundcheck.

"From there, it was foot on the gas; we're not going to slow down now," says Mason, who now leads Backroom Sessions as director. "We really infiltrated the brewery community."

Lately, it's rare to see a day of the week without a Backroom Sessions-produced event, especially at breweries like Unseen Creatures, Lincoln's Beard Brewing Co., Beat Culture, and Union Beer Store. It's also expanded to artistic venues such as Pérez Art Museum Miami, Showfields, and Superblue.

Although event production is the heart of the company, Backroom Sessions has also expanded its services to managing artists, as well as collaborating with Natives Media to give media and marketing portfolios to artists, in turn giving artists the opportunity to showcase themselves.

"Backroom is like the bastard child that gets along with everyone. I think that's what helps us be different," Mason admits in an attempt to explain Backroom Sessions' growth. "We like unorthodox; we like outcasts. That's what I feel like, and that's what I want to welcome."

In past years, the Fair has hosted performances by TLC, Nelly, Ginuwine, Gente De Zona, and Becky G. When the Fair decided to focus more on local acts in 2019, it reached out to Backroom Sessions to program a stage. Since then, Backroom's presence has expanded to two stages. (There's no word if the Fair plans to bring back national touring acts to the music schedule.)

"We get hundreds of people rolling by every hour, so by the end of it, we've interacted with thousands of locals that don't know us or don't know the band, and it's nice to see them bobbing their head and tapping their foot," Mason says. 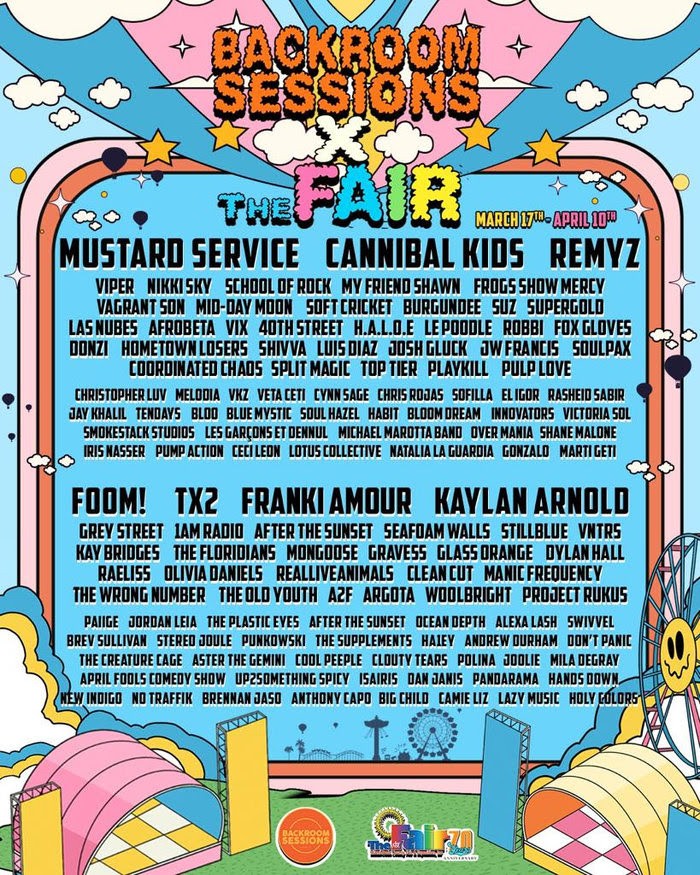