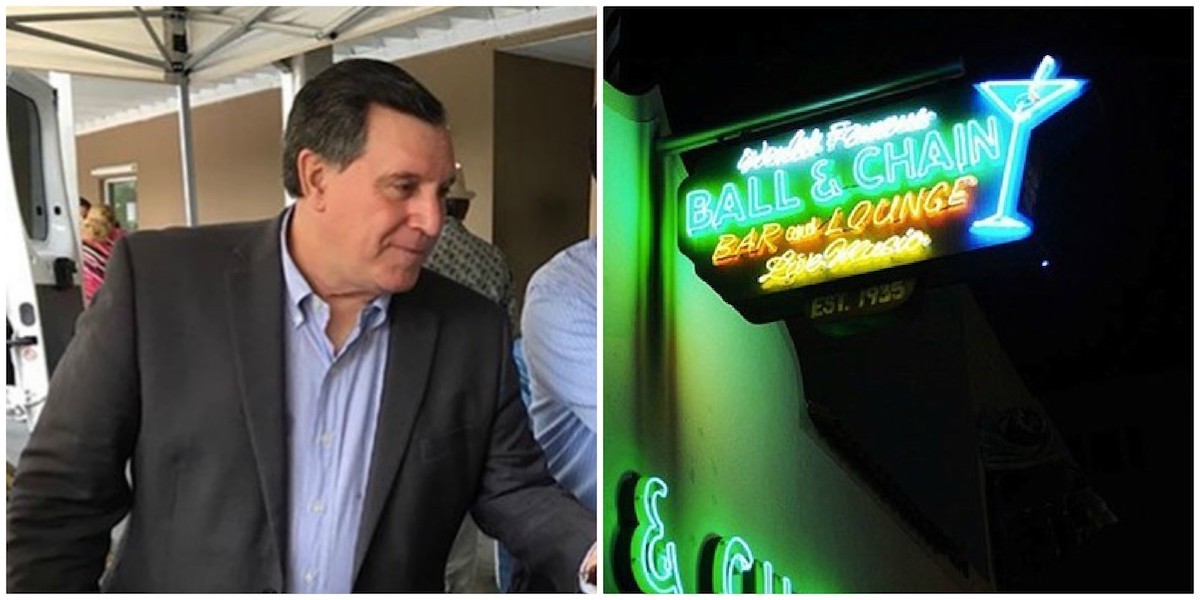 Photos via Commissioner Joe Carollo/Ball & Chain
A federal appellate ruling clears the way for Bill Fuller, the owner of Ball & Chain, to sue Miami Commissioner Joe Carollo for harassment and retaliation.
Turns out siccing code enforcement and city employees on a political enemy doesn't fall within the scope of a city commissioner's duties — at least according to a recent ruling by the U.S. Court of Appeals for the Eleventh Circuit it doesn't.

The road to the ruling can be traced back to a lawsuit filed in federal district court by Little Havana business owners William "Bill" Fuller and Martin A. Pinilla against Miami Commissioner Joe Carollo in his personal capacity. The complaint, which was filed in October of 2018, alleges that after Fuller supported Carollo's opponent in the 2017 run-off election for city commission, Carollo engaged in targeted harassment when he staked out Fuller's properties and affiliated businesses and called in false complaints to code enforcement and city employees.

Fuller and Pinilla are seeking $10 million in damages.

For more than three years, the lawsuit has stalled in court over the question of qualified and legislative immunity, legal principles that protect police officers, elected officials, and lawmakers from being sued personally for things they do while on the job. Carollo's attorneys have filed motions to dismiss, arguing precisely that.

However, Fuller and Pinilla allege that Carollo was acting outside of his duties as a commissioner when he gave direct orders to city employees and code-enforcement officials — over whom Carollo has no administrative authority —  to target their businesses — namely, Ball & Chain, a lounge and restaurant owned by Fuller and brothers Zack and Ben Bush of Mad Room Hospitality; Union Beer Store, a craft beer bar located in a building Fuller and Pinilla own; and Sanguich de Miami, an eatery specializing in Cuban sandwiches that opened in a refurbished shipping container on a lot Fuller and Pinilla own but has since moved to a permanent storefront.

When the federal district court denied Carollo's motion to dismiss, finding no basis for qualified immunity and only one protection under legislative immunity, Carollo's attorneys appealed. Now that the federal appeals court affirmed the lower court's decision on February 4, Carollo's only recourse to avoid a trial that might find him (not taxpayers) financially responsible is to ask the U.S. Supreme Court to hear the case.

"Carollo’s alleged enforcement actions were not legislative functions for which he was entitled to absolute immunity," wrote judges William Pryor Jr., Lanier Anderson III, and Charles Wilson in their appellate ruling, which has been embedded at the end of this article. "Carollo’s argument for qualified immunity also fails."

The only immunity either court found was for "actions related to the passage of Ordinance 13733," which was passed by the commission and ended the temporary-use permits that allowed Sanguich to operate.

This is the second time a court has ruled that Fuller and Pinilla's allegations fall outside Carollo's duties as a commissioner. Assuming it stands, the ruling sets a legal precedent for constituents to sue their elected officials as private individuals and outlines the limitations of qualified immunity, which has come under increased criticism for shielding bad actors in government and law enforcement.

"The court normally takes the position that we can't have residents suing their elected officials every time the officials do something they don't like. The judicial system would grind to a halt if they could," explains Miami attorney David Winker, who has been closely following the case for the past three years. "But the court agreed with the position taken by Bill Fuller, in his lawsuit, that targeting a single person for code violations is not part of the job description."

Fuller himself is gratified that while Carollo's tactic has been to delay proceedings through appeals and motions to dismiss, the recent appellate court ruling opens the door for a trial to begin.

"We're confident we'll bring overwhelming evidence and key testimony and prove what we've known for a long time: that [Carollo] has politically retaliated against us for not standing in lockstep with him, and he has mobilized all the city departments to create max amount of harm to our properties, employees, and their families," Fuller tells New Times.

Because the appellate ruling establishes that Carollo was acting in his personal capacity and not as commissioner, the City of Miami is no longer required to cover the commissioner's legal fees. To do so, the commission would have to vote to allocate taxpayer money to Carollo's personal legal defense.

Miami City Attorney Victoria Méndez tells New Times via email that Carollo "is entitled to get his fees paid" but declined to comment on whether the city will address the matter at a future commission meeting.

Winker predicts the city will continue forking over taxpayer money.

"They always pay Carollo's legal fees," says the attorney. "Ben Kuehne's not cheap, and those bills are gonna continue to get paid by the city. That's why Carollo's untouchable."

The plaintiffs are seeking $27.9 million in damages from the city.