Photo by Christian Torres
Dope Tavio
There are many sights to take in during a late-night outing on NE 11th Street. Yet Club Space's veteran doorman, Alan T, and both his brio and dazzling wardrobe are at the epicenter.

Cuffed in ruffles, laced in layers, and garbed in an asymmetrical blazer on New Year's Eve, his ensemble looks endless. And when it comes to those puffy, oversized statement pieces, there is only one designer Alan T (AKA Alan Tibaldeo) thinks of contacting: Dope Tavio (AKA Octavio Aguilar).

Born and raised in New Jersey to Puerto Rican parents, Aguilar was indoctrinated into the legendary New York City clubbing scene that laid an early blueprint to his artistic schema.

"I was an NYC club kid," Aguilar tells New Times. "I got to be a part of the nightlife scene, and that influenced my work for years to come. People get it when they see my work: New York with an infused hip-hop, clubbing, punk-rock vibe."

His pieces are often colossal and ruffled, primarily black and white, and handmade with stitched-together dynamism that could resemble a prototype to conformist bashing punk kids or euphoria-surging ravers. Stripes and polka dots are common motifs. The clothing is sculptural — using the body as a structure for his warped genderless designs.

"Aside from a few friends, the clothing is done by me," he adds. "I divide time between making pieces entirely from scratch and upcycle vintage pants and blazers. I can chop a blazer into 20 pieces and use each piece for different items."

Soft-spoken with a bright red mustache, Aguilar moved to Miami in 2004. He was already a fashion designer up north, but the Magic City's endless summer ethos bulwarked his creativity.

"I right away discovered there is no fashion here unless I have a bikini line," Aguilar laments." I took a hiatus from designing, and it wasn't until maybe five years ago when I decided to start sewing again."

During the gap, he worked at the high-end Brazilian furniture company Artefacto, which he left to become an interior designer before returning to fashion. Aguilar began stitching and sewing for fun and posted a few creations on Instagram. Then a stylist looking for pieces for Erykah Badu reached out.

"This was literally three months from me deciding to start sewing again," he adds.

Aguilar sent the stylist some pieces, which Badu wore to the 2016 Soul Train Music Awards.

Soon the 42-year-old began sending pieces to Madonna and Janet Jackson's team, scratching them off his people-to-dress bucket list just before fashion designer Patricia Fields picked him up.

"I got to be a part of her art gallery in New York," Aguilar says. "After she closed her shop, she wanted to remain online to feature some of her curated artists, and I ended up being one of them." 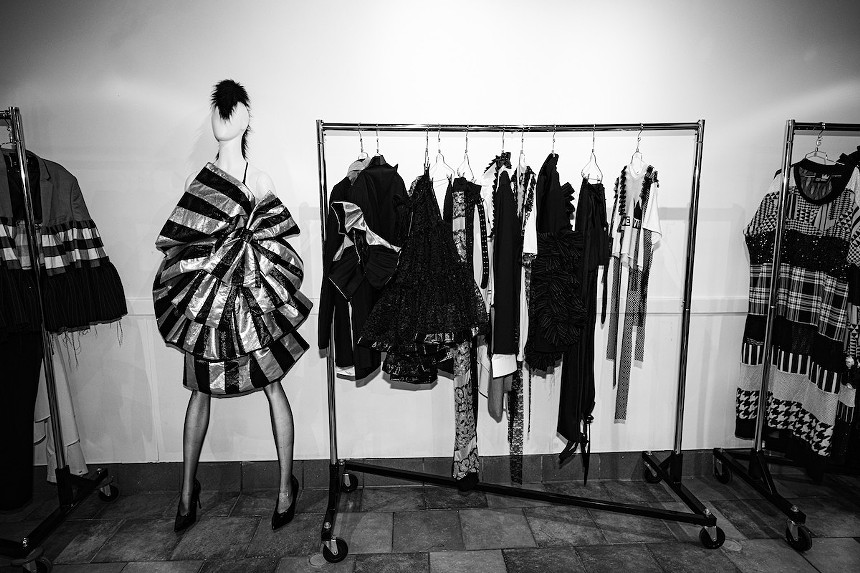 Dope Tavio's pop-up shop at 125 E. Flagler St.
Photo by Christian Torres
Aguilar will be first to admit his designs are not for the everyday Miamian. The pieces are too heavy for the heat, too monotone for the honey-mango aesthetic, and lack a tight fit.

"It's not a Miami vibe — at all," he confesses. "I think the best time I do business here is during Art Basel and Winter Music Festival — whenever the out-of-towners are here."

Aguilar's designs one-of-a-kind statement pieces, whether for a hip-hop artist in need of a wardrobe for a music video or Alan T on Thursday.

"I met him before his first move back to New York City," Tibaldeo recalls. "We became really close. His stuff is one of a kind; it's a total embodiment of a lifestyle. When I moved, he did my interior. It's difficult stuff to make, and he's there doing it all."

During Miami Art Week last December, real estate and investment company Mana Group set him up with a temporary storefront at 125 E. Flagler St. to showcase his work. The pop-up, which will close later this month, is draped in his creations as well as more ready-to-wear "Dope Tavio" t-shirts and other brands.

"Mana loved what I brought to downtown, and they're offering me a full-time space," he says. "That's going to happen after the new year."

You also might recognize Aguilar as a contestant on last year's season of Project Runway.

"Project Runway contacted me and wanted to do an audition. Everything was done on Skype and Zoom [due to the pandemic]," he explains.

Despite a yearlong production delay, Aguilar made it through eight episodes and never broke his number-one rule: Always keep to his style — no matter the challenge.

Aguilar's time in front of the cameras isn't over. Next year, he'll be the focus of a documentary by filmmaker Pedro Gonzalez titled Dope Tavio. Originally a short student film, Gonzalez is now producing a full-length feature that will go over Aguilar's life and use his decades of video footage as a conduit to tell the narrative.