Photo courtesy of El Deseo
Penélope Cruz stars in Parallel Mothers.
Now in its eighth iteration, the Miami Film Festival Gems has come into focus as a cornerstone of Miami's big-screen scene. A clever and strategic addition to the festival's annual spring edition, Gems allows the event to capitalize on the abundance of riches available during the fall festival circuit and a preview of the impending awards-season deluge.

This year's edition brings a high-quality selection of domestic and international films that will dominate conversation among cinephiles for the next several months. The crop is so bountiful that the 2021 edition sees Gems expanding from a four-day weekend festival into an entire week. The eighth edition takes place November 4-10 at Tower Theater in Little Havana.

Executive director Jaie Laplante is excited for the festival to return to its home base and welcome back patrons to share the communal theater experience after nearly a year and a half of unpredictability on the cinematic landscape.  Along with co-director of programming Lauren Cohen and Ibero-American specialty programmer Carlos Tejera, Laplante has curated a diverse group of films that promises to entertain, educate, and move.

Not coincidentally, the Gems lineup is being announced as the New York Film Festival enters its final week; both festivals offer a carefully culled assortment of films from film festivals worldwide, including Cannes, Venice, and Toronto.


Gems has fortified its lineup with strong opening, centerpiece, and closing night films. It will pick up where NYFF closed: with the Miami premiere of Pedro Almodóvar's Parallel Mothers. The auteur's newest work opened this year's Venice Film Festival, where its star Penélope Cruz won the Best Actress prize. The winning combination of Almodóvar and Cruz — their seventh collaboration — and a late-December theatrical release suggests that its distributor will push hard to join the Oscar race for director and actress. 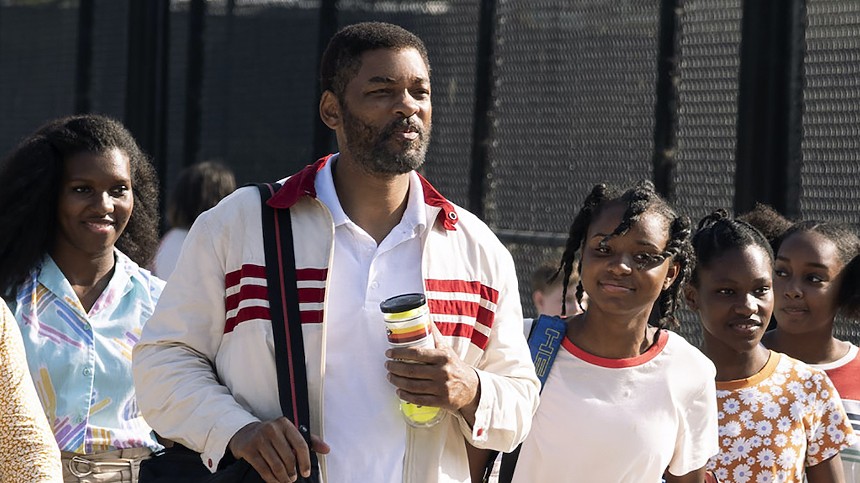 Will Smith stars in King Richard.
Photo courtesy of Warner Bros.
Likewise, the centerpiece and closing-night films have strong Academy Award potential. The former, King Richard, starring Will Smith, is a frontrunner for Best Actor for his portrayal of Richard Williams, the demanding father of tennis phenoms Venus and Serena Williams. A pivotal moment for Smith, it is also a huge film for director Reinaldo Marcus Green. He came to helm the project after Jada Pinkett Smith saw his feature debut Monsters and Men while serving as a jury member at the Sundance Film Festival.

The closing-night film, more of a left-field choice, is the acclaimed animated documentary Flee. Already selected as Denmark's official Oscar submission for Best International Feature and winner of this year's Sundance Film Festival Grand Jury Prize, Flee is a timely look at the life of Amin, a queer refugee who shares his past for the first time since leaving Afghanistan.

Additionally, Gems has secured a screening of Kenneth Branagh's Belfast, a deeply personal family drama set in Northern Ireland during the turbulent 1960s. The film has already proven to be a crowd-pleaser, winning the People's Choice Award at the Toronto International Film Festival, often a predictor of a Best Picture nomination (if not win).

This year's Venice Film Festival echoed the Cannes Film Festival when it awarded its top prize, the Golden Lion, to another rising French female filmmaker, Audrey Diwan. Her film Happening is a tense and timely thriller about a student in 1960s France desperately seeking an abortion. The film will pair perfectly with Lingui, The Sacred Bonds from Chadian director Mahamat-Saleh Haroun, which follows a mother as she navigates legal and religious restrictions with her pregnant 15-year-old daughter. The film opened at Cannes, garnering Haroun some of his best reviews to date.

Gems is full of buzzy Cannes titles, including Paris, 13th District, A Hero, Mothering Sunday, The Worst Person in the World, and Red Rocket, all of which merit deeper looks.

The aforementioned Flee is far from the only eye-catching documentary offering. Perhaps the most high-profile entrant in that category is Julia, a film about culinary and cultural icon Julia Child. The screening will be followed by a Julia-inspired dinner at Michelle Bernstein and Julio Cabrera's Café La Trova a few blocks down Calle Ocho from Tower Theater.

Such is the abundance of riches at this year's Gems that a screening has been scheduled before the festival begins: Chilean filmmaker Pablo Larrain's Spencer, starring Kristen Stewart in the Oscar-contending role of Princess Diana, screens on Wednesday, October 27.