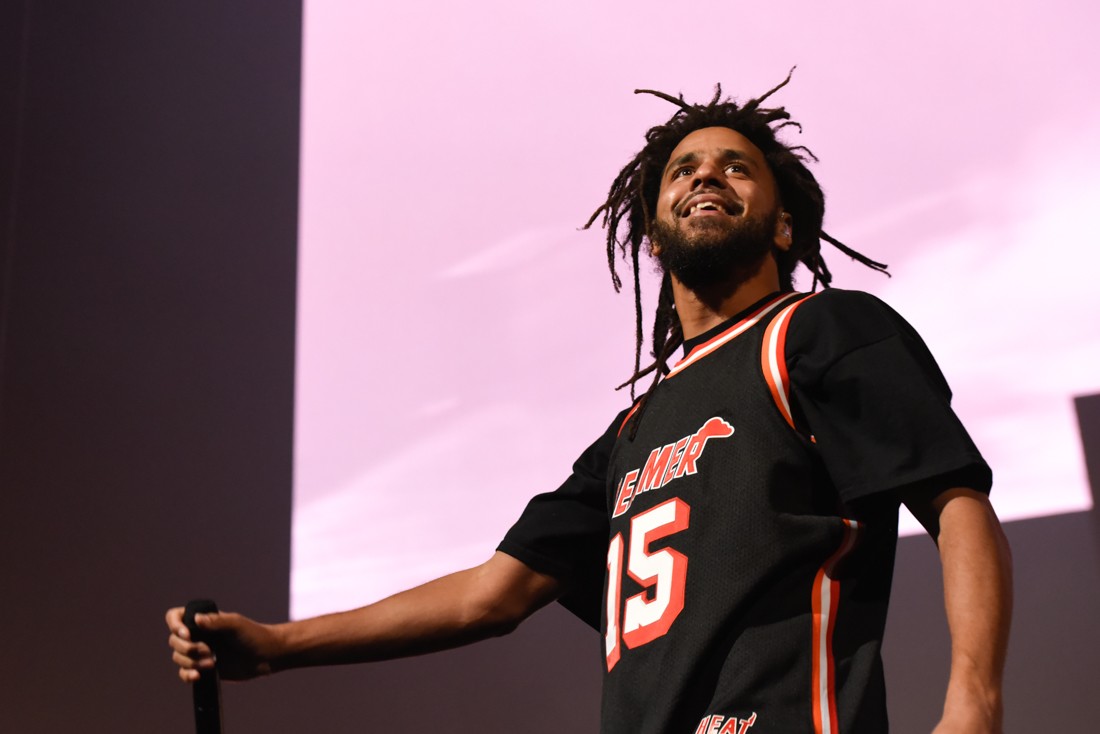 Photo by Michele Eve Sandberg
J. Cole performing on the first night of his The Off-Season Tour at FTX Arena in downtown Miami. See more photos from J. Cole at FTX Arena here.
During the pandemic, only a few artists have the drawing power to lure fans into the massive sea of humanity of an arena setting. For rap fans, J. Cole is that artist, and he curated an experience that was worth the trek to FTX Arena in downtown Miami.

On Friday, September 24, the North Carolina native launched the first night of his long-awaited tour in support of his sixth album, The Off-Season. The inaugural show of the 20-city tour began with opening act Morray, a rising star who, like Cole, hails from Fayetteville. The 2021 XXL Freshman Class rapper hit the stage to perform well-known hits like "Quicksand" mixed in with fresh material like "Bad Situations."

Once he wrapped up, all eyes were on 21 Savage. Only 24 hours before the tour began, fans of the Atlanta-based rapper were uneasy about his appearance. On Thursday, the "Savage Mode" rapper, born She'yaa Bin Abraham-Joseph, turned himself to DeKalb County authorities in Georgia over a warrant that U.S. Immigration and Customs Enforcement had issued for his arrest on September 7. The allegations  of felony drug and weapons possession stem from a previous ICE arrest over two years ago. But after being released from custody on Friday, 21 assured his fans he'd make it to Miami by showtime.

21 Savage performing at FTX Arena. See more photos from J. Cole at FTX Arena here.
Photo by Michele Eve Sandberg
The 28-year-old rhymer stepped on stage in camouflage pants and a white graphic T-shirt to the strains of "Don't Come Out the House" off Metro Boomin's Not All Heroes Wear Capes. The LED display took numerous forms on stage, from stained-glass church windows to concrete pillars with sculptures and fire burning behind them. The one prop that remained unchanged: an oversize sword that glistened at the middle of the stage. The sword's hilt was gold and covered with diamonds, the blade engraved with the names of 21's crew who've passed away: "RIP Johnny. RIP Tayman. RIP Larry. 4L Slaughter Gang."

Despite a few technical difficulties, 21 glided through his set, performing bangers like "My Dawg," "Runnin," "Can't Leave Without It." "X," and, of course, "Bank Account." The Slaughter Gang leader commanded the stage and set the tone for the rest of the night.


As a black curtain blanked the entire stage, a video of Cole prepping for the show began to play. With "Punching the Clock" playing in the background, the footage showed Cole lacing up his shiny red sneakers and putting on his Miami Heat-inspired "Dreamer" jersey before walking out on stage. The curtain dropped, revealing Cole, mic in hand, at the helm of the stage. He kicked off the show with the intro song on The Off-Season, "95 South." Footage of Lil Jon & the East Side Boyz flashed above, helping him close out the track and segue into the next joints, "Amari" and "Applying Pressure." 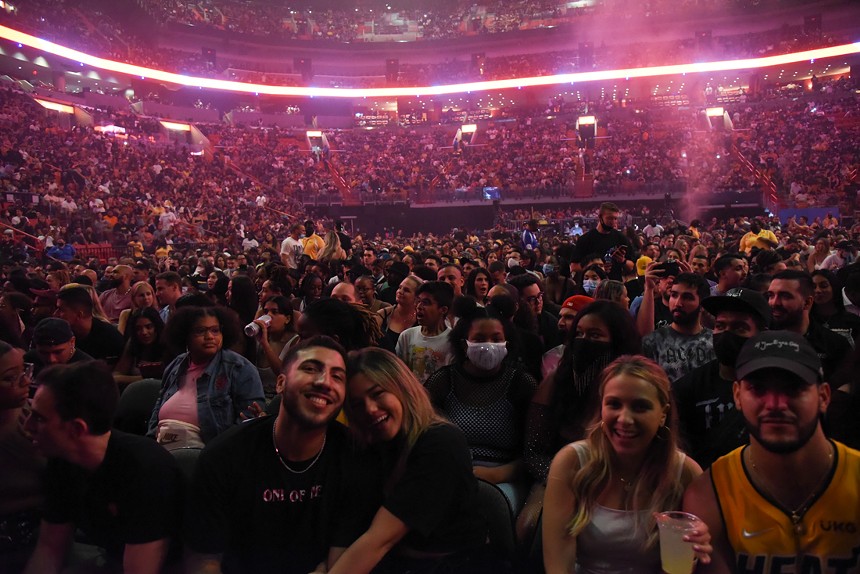 The crowd at FTX Arena. See more photos from J. Cole at FTX Arena here.
Photo by Michele Eve Sandberg
"We gonna do the whole fucking album, by the way," Cole said before continuing. "I don't give a fuck. I don't care what type — you know what I mean? Hit or not, it's getting done. The bars will be heard."

The Dreamville founder brought The Off-Season's album cover to life by re-creating an oversized version of the infamous basketball hoop engulfed in flames. Instead of fire shooting up from the edges or sides of the stage, flames rose from the hoop itself. He delivered more bangers from the album, like "Pride Is the Devil," during which he tried and failed to rap Lil Baby's verse, and brought his labelmate Bas to deliver other tracks like "100 Mil," "Let My Hand Go," and "The Jackie." He also devoted a significant amount of stage time to performing fan favorites like "Power Trip," "A Tale of 2 Citiez," and "G.O.M.D.," to name a few.

The show's climax hit when Cole finally brought out 21 Savage to rock out to their critically acclaimed collaboration, "A Lot." Soon after, Cole called out Morray to deliver his hit "Quicksand," but midway through his song, the 28-year-old cut it short and started singing the song he really wanted to perform: "My Life." While it was a peak moment during the show, it barely scratched the surface of what Cole still had up his sleeve. 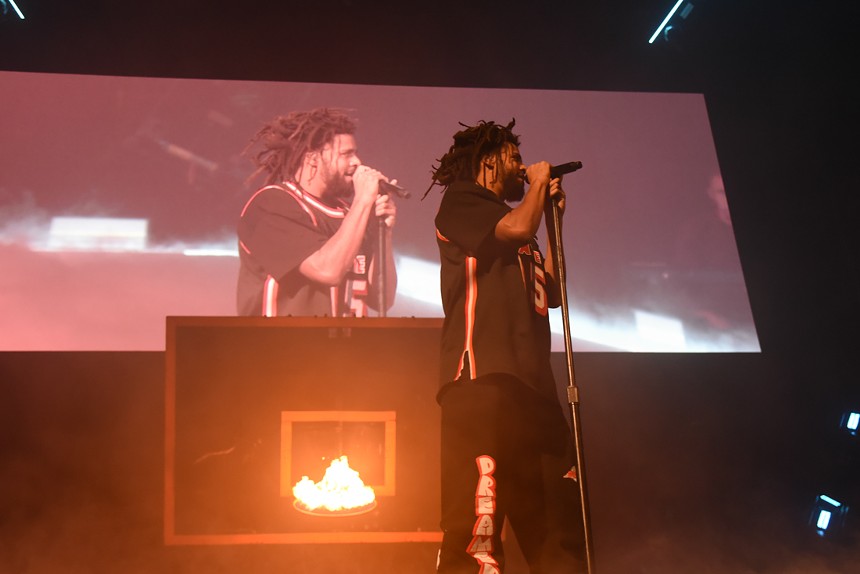 J. Cole brought The Off-Season's album cover to life on stage. See more photos from J. Cole at FTX Arena here.
Photo by Michele Eve Sandberg
As he walked off the stage, signaling the possible end to the show, the fans chanted his name and demanded his return. Not only did he come back out, but he brought along a few friends. Cole shocked the entire arena by bringing out Drake. The Certified Lover Boy blessed the crowd by performing "Knife Talk" with 21 Savage and even brought out another surprise guest, Future, to belt out their latest hit, "Way 2 Sexy." At the end of his appearance, Drake took the time to praise Cole's "Heaven's EP," in which he freestyles over Drizzy's "Pipe Down" off CLB.

"You did that 'Pipe Down' freestyle the other day," Drake told Cole. "You was sayin' in the freestyle that they gave you the bronze or whatever, me and Kendrick [Lamar]...I just want you to understand something. You are genuinely, without a doubt, one of the greatest rappers to ever touch a mic."

New Times has seen Cole perform at Rolling Loud in Miami Gardens and nearly every tour stop he's made in our city over the years. But the last quarter of the first night of the Off-Season Tour elevated this performance to the best tour launch of his career. It also occasioned a pivotal moment that will live on in rap history for years to come.