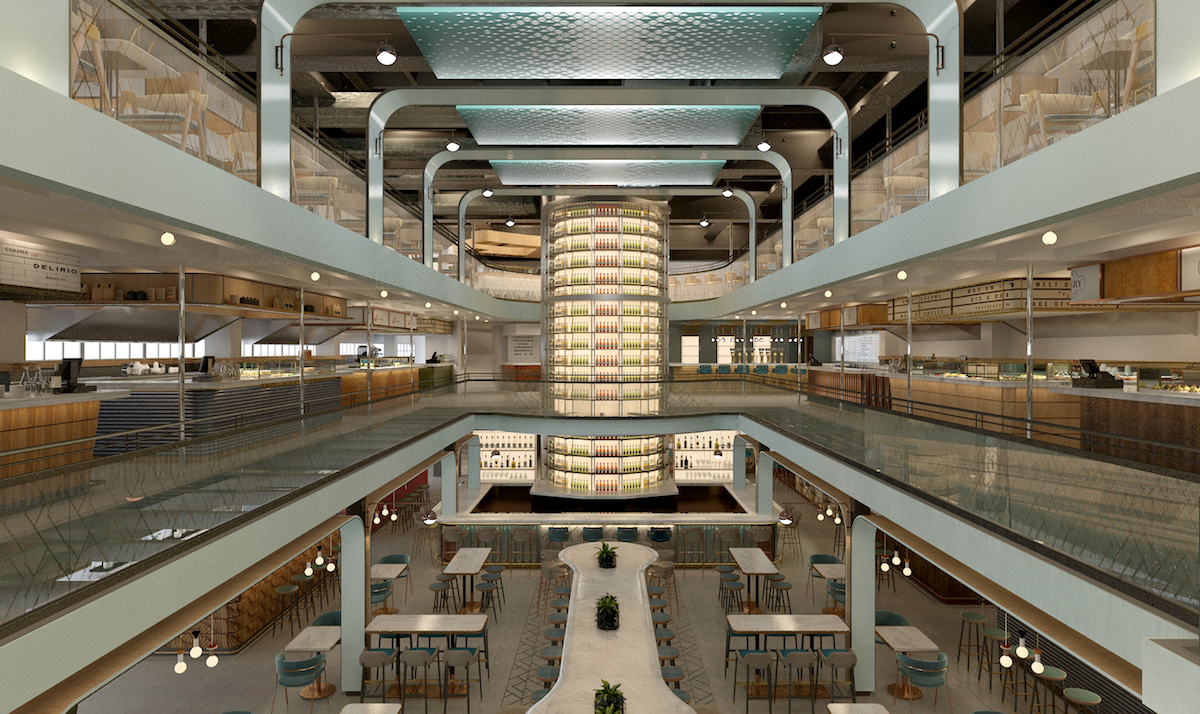 Rendering by Stambul
Julia & Henry's will offer several levels of food and beverage concepts.
A multilevel entertainment complex with a focus on dining is coming to downtown Miami — and some of Miami's top names have signed up to participate.

The complex, which is slated to open early next year, will be called Julia & Henry’s, a nod to Miami pioneers Julia Tuttle and Henry Flagler.

The seven-level, multiuse establishment will include a rooftop restaurant helmed by a yet-to-be-named celebrity chef, a basement speakeasy-themed bar, and three floors dedicated to more than 20 food and beverage concepts.

That food hall will house a variety of market-style venues offering lunch, happy hour, and dinner from top Miami chefs, including José Mendín and Michelle Bernstein. Karla Hoyos, who headed the kitchen at the Bazaar by José Andrés, will debut her own restaurant at the food hall. A rendering of a cocktail bar inside Julia & Henry's
Rendering by Stambul
For those looking to imbibe, each floor will offer a unique bar and beverage program, from wines curated by Karina Iglesias of Niu Kitchen to a basement-level speakeasy called Jolene from the Bar Lab team.

Boxelder will also be opening at Julia & Henry's. Earlier this week, owner Adam Darnell shared with New Times that the craft beer bar, which is losing its lease in Wynwood, would open a location downtown.

According to Stambul, a local construction company that purchased the historic 1936 structure in 2018, the dining and entertainment hub will create an estimated 750 new jobs and attract more than 800,000 visitors per year.

With an investment as small as $500, anyone can buy in to the new project via School of Whales.

Launched in June by Andrea Petersen, Stambul general manager Daniel Pena-Giraldi, and Juan Jose "JJ" Pena-Giraldi, School of Whales seeks to redevelop historic commercial properties while offering everyday people an easy way to invest in real estate. With a minimum $500 investment, the startup's platform allows anyone to buy into and profit from the company's South Florida-based projects.

"Julia & Henry's will offer a healthy mix of culinary talent, and we're expecting it to be a catalyst for the transformation of this area," Daniel Pena-Giraldi tells New Times. "Beyond that, this is a great opportunity for the South Florida foodie audience to be able to own a piece of their favorite place." Julia & Henry's will include a rooftop restaurant.
Rendering by Stambul
Elaborates Petersen: "Our goal is to open up commercial real estate development to anyone who can put $500 to work. The goal is to create an easy real estate investment fund that allows anyone to be part of developments designed to leave a lasting and positive impact on their communities. Think of it as profit with a purpose. Anyone can make money in real estate, but that doesn't mean it's always the best fit for the community."

Those who join School of Whales are given a small ownership stake in the properties that make up the real estate fund. Over time, the fund will include a variety of projects from commercial developments to high-end hotel renovations. As the properties begin turning a profit, investors are paid an 8 percent rate of return.

Moving forward, upcoming School of Whales projects include a hotel restoration in Fort Lauderdale and a vacant lot in downtown Miami that will be developed into a new hotel venue, Petersen says.

"Beyond offering a unique investment opportunity, our more ambitious goal is to bring people into the conversation of financial mindfulness, and really allowing people to participate not only financially, but also learn more about real estate development," Petersen tells New Times. "We are passionate about the projects we participate in, projects that help the community and preserve historic sites."