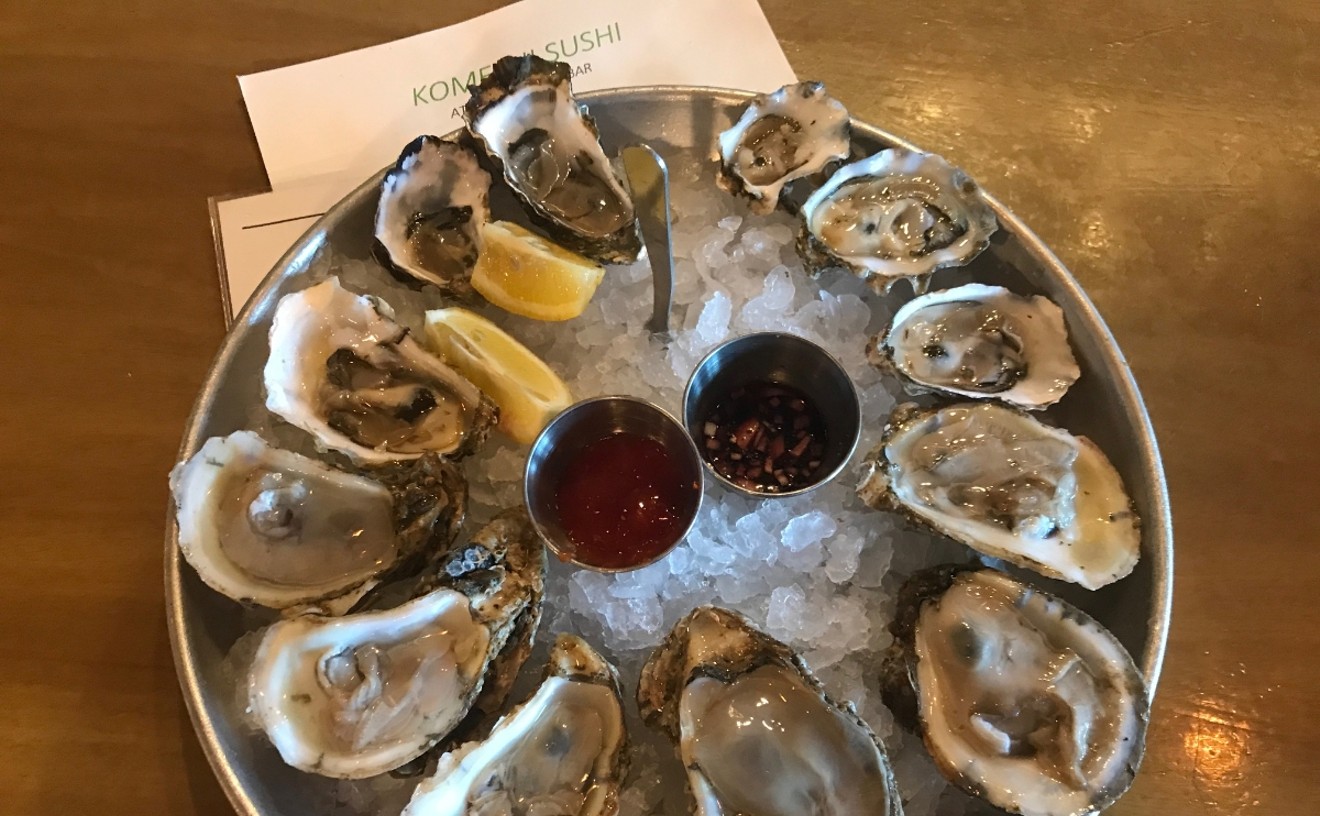 Photo by Laine Doss
Happy-hour oyster deals are becoming rare thanks to Hurricane Ida.
It's Friday, and you're ready to start a long weekend. There's no better way to celebrate than with a dozen one-dollar oysters and few pain removers at Monty's in Coconut Grove.

There's just one thing to damper your mood: Monty's is fresh out of oysters. The restaurant posted the news on its Instagram page, leaving countless fans of affordable shellfish in the lurch.

Monty's general manager Juan Barretta confirms the oyster shortage. Barretta says that Monty's sources its oysters from the Gulf Coast, and the ones on offer have been in short supply and, simply, subpar.

"We have been refusing oysters almost every day for the past month," Barretta says. "We refuse to serve anything but the best to our guests. What made it worse was Hurricane Ida, which went through the oyster farms."

He admits that Monty's could source oysters from other regions — like the Northeast — but they would be too expensive to offer for one dollar.

"We could bring in oysters from other areas, but we'd have to charge three or four dollars an oyster during happy hour and maybe upward of $40 for a dozen during dinner."

Barretta says the decision was not to offer more expensive oysters at this time. Besides, he adds, Monty's customers come for the Gulf oysters.

"It's a piece of Miami to slurp Monty's oysters. The Gulf oysters have value for their size and taste."

However, the problem is no one knows how long the oyster shortage will last.

"As far as I know, the area has been damaged. We're not sure when the boats will be back," Barretta says.

Prices have been going up for oysters in other regions as an answer to the Gulf shortage.

"It's a chain reaction," Barretta explains. "The other farms are now raising prices. The person who gets hurt the most in this situation is the restaurant guest."

Chef Scott Linquist of Como Como agrees that prices are surging — not only for oysters but for all seafood.

"It's not just oysters — the Gulf is one of the largest shrimp producers in the world," Linquist says. "We don't have a shrimp shortage yet, because 99 percent of shrimp are frozen when caught. But if you miss a month because of weather, the shortage will catch up with you at some point."

Linquist points out that the pandemic has also played a hand in supply shortages.

"It's everything: Tequila brands don't have the bottle production to bottle their spirits; beef prices have gone through the roof. At some point, we couldn't even get chicken," he says.

With supplies getting costlier, restaurant owners have to decide how to keep their menu prices from driving away customers. Baretta decided not to buy pricier oysters and instead price all other happy-hour snacks like chicken strips, hummus, truffle fries, and guacamole at 50-percent off. Monty's Raw Bar also still offers one-dollar shrimp. Pain removers, the restaurant's signature drink, is also available. (Monty's Raw bar happy hour is offered daily from 4 to 7 p.m.)

And, if you want oysters, Scott Linquist says Como Como still offers $1.50 oysters for its happy hour, offered Wednesday to Sunday from 6 to 8 p.m. at the bar only.