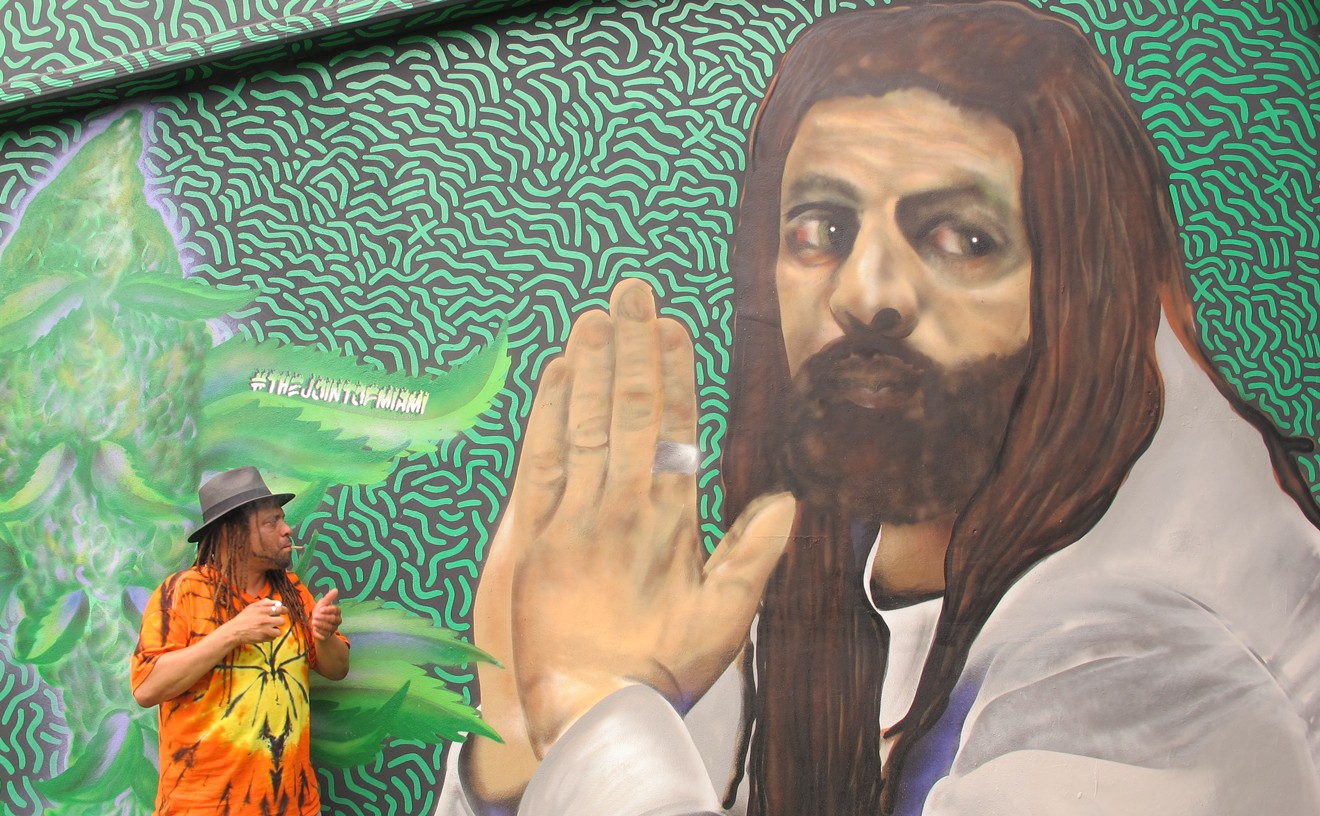 Photo by Natalia Galicza
NJWeedman sparks a joint while standing in front of a mural of himself.
When NJWeedman (legal name Edward Forchion) stumbled through Wynwood on the first weekend of February in 2021, he made a promise to himself. Though that promise was made in a haze of marijuana and psychedelic mushrooms, he says he’ll never forget it.

Maybe it was the mushrooms, but he swears the art district’s murals seemed to come alive that weekend. Passersby flooded Wynwood’s sidewalks, and as NJWeedman strode past them, he sniffed swirls of cannabis-scented smoke with each step. It all felt like a sign that the nation’s green rush would soon storm Miami. And, as an outspoken marijuana advocate for more than 30 years, he felt that this could be the perfect place to leave a lasting legacy.

Five months later, he followed through on his promise.


The Joint of Miami opened over the Fourth of July weekend. The members-only weed lounge operates in the evenings from Thursday through Sunday, with performances from DJs and the occasional fire dancer or stripper. Guests can purchase annual memberships for $420 or pay $40 at the door for a day pass. A limited selection of liquor is available, and no marijuana is sold on the premises, but stoners can smoke their own supplies while they socialize.

NJWeedman believes the space will constitute another step toward mainstreaming recreational weed use in a city where only medical use is legal.

Staff at most clubs and bars in Wynwood routinely turn blind eyes to spliffs being passed around, but the Joint is the only venue of its kind in Miami. It explicitly and solely markets itself as a cannabis smoke spot.

“I want to cater to the community,” NJWeedman says. “I am openly seeking potheads out as patrons. That's not what everybody else is doing.”

Graffiti beside the roller-shutter door depicts a wall-length bong and an equally massive marijuana bud. Interior walls are painted black and serve as canvases for local artists, with blacklight murals that glint under stage lights to brighten up the bar and dance floor, the latter complete with a stripper pole.

The air is saturated with enough smoke to rival the feel of Miami humidity, and a food truck — aptly named the Munchie Mobile — sits atop fake grass in an outdoor area attached to the back of the venue. The menu has yet to be finalized, but imagine a range of munchie foods from veggie tacos and empanadas to hot dogs and French fries. The Joint also offers a full bar, so you can relax with your drink of choice along with your smoke. 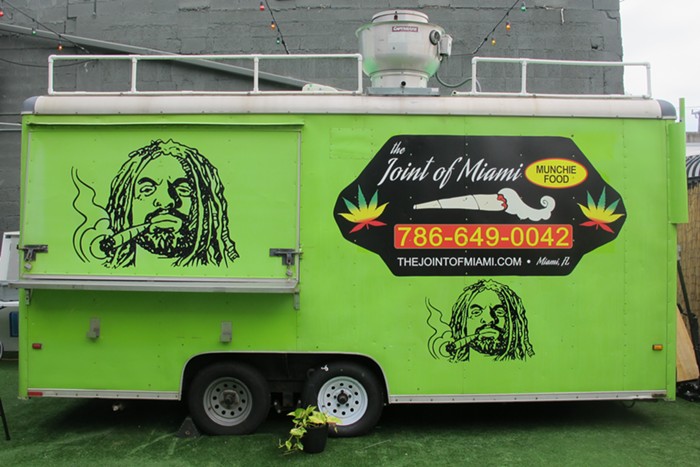 The "Munchie Mobile" is parked in the backyard of NJWeedman's lounge.
Photo by Natalia Galicza
Live music includes Latin sets on Thursdays, reggae on Fridays, hip-hop on Saturdays, and alternative rock on Sundays. Eventually, NJWeedman intends to hold events like yoga classes and spoken word readings, though none are currently scheduled. He’s also in the midst of filming a reality show, Miami’s High Life With NJWeedman, with Unleashed Entertainment to document the startup.


The Joint has been drawing weekend crowds of 100-plus patrons in its first two weeks of business. It’s a promising start, but NJWeedman expects more growth. He hinted at the prospect of hosting big-name rappers in the near future.

“A couple weeks from now, we’ll be a finely tuned pothead machine," he promises. 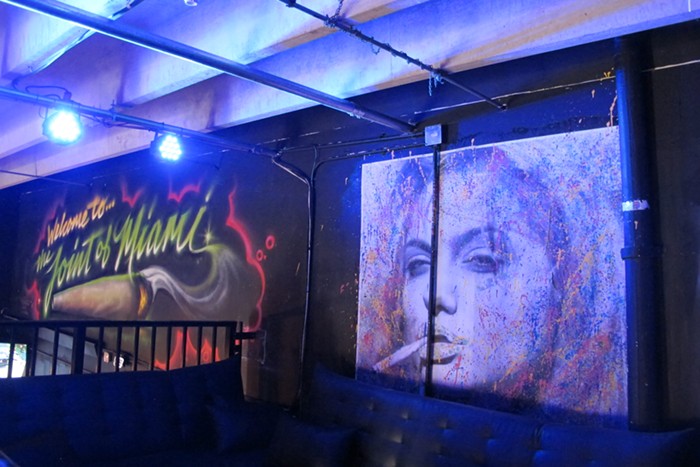 The entrance to the lounge is decorated with murals that glow beneath blue lights.
Photo by Natalia Galicza
His confidence is due in large part to having experience. The 57-year-old runs a smoke shop and restaurant in Trenton, New Jersey, that made headlines for openly selling marijuana products and psychedelic mushrooms directly across from city hall (before the state legalized recreational marijuana last year). He also used to own a weed lounge in Los Angeles. The Joint is his first Florida venture.

But recreational marijuana use is not yet legal in Florida. And while Weedman admits he doesn’t know whether he'll face legal consequences for this establishment, he claims to have received calls from lawyers offering their services on standby.

The community support makes it more palatable to deal with the prospect of litigation. Besides, he has been there before. It’s all a part of his stated goal to normalize cannabis consumption and put power back into the hands of those excluded from the predominantly white and wealthy legal cannabis industry.

“I’m also a felon, so this is my way of making a lane for myself,” the weed entrepreneur says.

Criminal conviction restrictions often bar those with nonviolent marijuana charges from obtaining state licenses necessary for working in the industry. Weedman calls the corporatization of marijuana the "Christopher Columbus effect."

Weedman is confident he’ll be able to sidestep any legal obstacles that might arise. A scroll through the homepage of his personal website shows a photo of him smoking a joint above text that reads “FUCK THE LAW, SMOKE IT ANYWAY.” Puns aside, he's blunt about his goals to turn his small lounge into a “Disney World of weed” and attract flocks of tourists. He hopes other weed clubs and lounges follow suit, and he's happy to pioneer the effort.

“I think we're getting ready to be the hottest new club in town.”