Photos by SunflowerMomma/Shutterstock (left) and Melissa Lyttle (right)
A bust of Robert E. Lee was erected in Fort Myers in the mid-1960s after multiple fundraising drives by the now-defunct Laetitia Ashmore Nutt Chapter of the United Daughters of the Confederacy. In June 2020, at the request of the Sons of Confederate Veterans, the bust was removed from its plinth. The Fort Myers City Council voted to take down the pedestal, but that removal is estimated to cost between $50,000 and $60,000, so for now it remains.
This story was produced in partnership with the Pulitzer Center.

Florida's place in the Civil War is enshrined in the form of dozens of Confederate statues, figurines, and namesakes that dot the state.

In Fort Myers, there was the pedestal-mounted figurine of Robert E. Lee, meant to honor the Confederate general known for being at the forefront of efforts to secede from the United States.

In St. Augustine, there's the Confederate Memorial Obelisk — at nearly 150 years old, the oldest Confederate memorial in the Sunshine State — which memorializes the treasonous soldiers who died defending the Confederacy.


In Jacksonville, there was the bronze figurine of a Confederate soldier in winter garb that, for more than a century, lorded over the downtown of Florida's most populous city.

Over the past year, each has either been relocated or removed entirely.

In the aftermath of the murder of George Floyd in Minneapolis, which set off weeks of unrest and protests in cities across the nation, veteran photojournalist Melissa Lyttle — a Jacksonville native and a former longtime staffer of the Tampa Bay Times — set out to document the sites where those symbols of the Confederacy once stood, both in Florida and across the U.S.

To date, she has photographed 60 sites, with plans to visit about 30 more.

Lyttle is producing the photo story, entitled "Where They Stood," in partnership with the Pulitzer Center, which helped fund the project.

"I'm interested in showing absence — empty pedestals and resodded town squares – as well as tracking down where these monuments are being moved to, since nobody seems to want them or know what to do with them once they've been taken down," Lyttle wrote in her project proposal. "From city impound lots to prison maintenance yards, I find the banality of the new locations to be a fitting kind of shame."


New Times caught up with Lyttle to discuss the project. The following interview has been lightly edited for length and clarity.
click to enlarge

First dedicated in 1898, a statue of a Confederate soldier standing atop a 62-foot-tall monument was one of the few landmarks in Jacksonville that survived the 1901 fire. On June 9, 2020, the statue was removed overnight, and Jacksonville Mayor Lenny Curry announced that others in the city would be removed as well.
Photos by Detroit Publishing Co./Library of Congress (left) and Melissa Lyttle (right)
New Times: For starters, take me back and tell me how you conceived of this project?

Melissa Lyttle: I was watching everything unfold last year as far as the racial reckoning that the U.S. was going through. I was just watching this country turn on itself, and it was a really scary time. I was trying to figure out what my role in all of this was, and I didn't have good answers. [When] George Floyd was killed, it's just kind of like the country hit this moment where it was really starting to try and figure out what it was going to become, and as a journalist, it was an interesting thing to watch. And so the conversation I had with myself was just sort of, "What can you add to this conversation, and how can you have a lasting impact on this conversation?" and "What questions are you not seeing answered in daily media coverage?" For me, it was that last one that really sort of sparked, I guess, the seed for this project which was: "What are cities doing with [the statues] after they come down?" "Once these statues come down, what should be done with them?"

And nobody really had an answer to that. So it was a really fascinating quest for me just to try to find out and get to as many as I could.
click to enlarge

Pensacola’s monument dedicated to “Our Confederate Dead” was erected in Lee Square in 1891, 26 years after the end of the Civil War. On July 14, 2020, the Pensacola City Commission voted 6-1 to remove the Confederate monument and 7-0 to rename Lee Square to Florida Square.
Photos by Detroit Publishing Co./Library of Congress (left) and Melissa Lyttle (right)
You must have anticipated that, at some point, you're going to have to broker access with people who harbor problematic or racist views about the history of these monuments. How do you approach delicate conversations like those?

I think this is one of those issues that it's really hard to sort of practice "both sides." I don't think there are two sides to this issue. I would just say I'm working on this project about all of the monuments that have come down in record numbers since George Floyd, and I'm interested in this one that came down in your town, and I would love to have access to where it is now, to see what you guys have chosen to do with it — and people either got it or they didn't. The people that got it and were happy that it came down, or at least satisfied with the resolution that their town made, opened their doors for me. They wanted to show me, and they were proud that it was down and no longer in this public square.

I do remember having a question asked to me from one city manager who point-blank said, "Can I ask what your feelings are on this?" It's a scary question because it's like, I know what my feelings are, and since I've been a journalist for 20 years, I'm not always comfortable voicing those. But I just explained to him I was born and raised in the South myself. I understand [people think] that there are two sides to this issue...I have family that are on both sides of this issue, but personally, I don't think there are two sides to this issue. My side is it's about time that these came down. It's about time that this country changes and becomes a safe place for everyone.

So you were pretty upfront about what your point of view is then?

I mean, when asked point-blank, yes. It was really funny with that particular city manager because I was kind of holding my breath after I'd said it, just waiting for his reaction. And he just said, "Oh good, me too." I think one good thing we learned early on is to not stereotype people or judge a book by its cover, because they'll always surprise you.

So yeah, when asked point-blank, I was very upfront, you know? And I would just try to educate people that maybe didn't see it that way and just try to explain the amount of harm that these [statues] are causing, the pain that they're causing. Of course, I was met with the "heritage not hate" argument, which is a popular one, and then I would just explain to them as best I could the sort of education I've gotten around this issue and that the majority of the statues went up in the '50s and '60s in direct response to Jim Crow laws.
click to enlarge 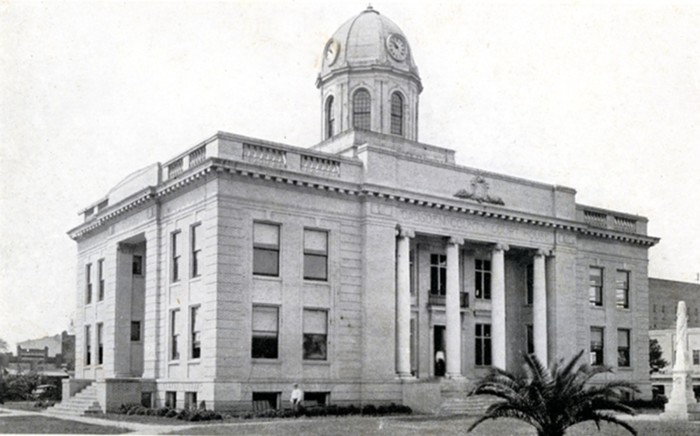 Erected in 1884 by the Ladies of the Memorial Association of Gadsden County, a Confederate monument in Quincy featured a phalanx atop a four-sided base. On one side of the base appears to be an officer in a dress uniform. On another side it said, "Sacred to the memory of the Confederate Soldiers from Gadsden County who died for their country."
Photo by Chicago Commercial Colortype Company/State Archives of Florida
click to enlarge

On June 11, 2020, less than 30 minutes after the county commissioners unanimously agreed to remove and relocate the Confederate statue in front of the Gadsden County Courthouse in Quincy, a crew was on scene to remove it. The monument is now being stored underneath a tarp behind razor wire and a securely guarded chain-link fence inside the prison maintenance yard at the Quincy Correctional Institution.
Photos by Melissa Lyttle
In photographing the sites where these monuments and statues once stood, how do you capture the essence of something that's not there? What do you look for?

That's a really good question. I think almost every single one was completely different and could not be planned in advance. I never knew what I was going to get walking up to it, you know? But for some of them, it was about pulling back and just showing the scene, and just showing a big empty space. I knew it was going to be paired with an archival image of that monument or statue in that space, so I knew that they were going to work together. So it all just sort of really depended on what I saw. Some of my favorite ones were, like, you would walk up to a hillside where I knew this monument was and you would look down and you just see a ten-foot-by-ten-foot square of dead, brown grass where they tried to cover it up. It was sort of a game. It made me work a lot harder.

How do you measure your success in a project like this, and how do you know when you're actually done?

I think that the real measure of success with a project like this comes from whatever sort of public dialogue it sparks, you know? And I think the fun thing has been sort of brainstorming what to do with it. With my background with newspapers and magazines, obviously sort of my go-to was to see it run in a big national magazine and get eyes on it. But I would also love to do outdoor displays, you know, a photograph sandwiched in Plexiglas...in these public spaces where they came out. I would like to see this go to some of the museums where these things have ended up to have that conversation about is this history worth preserving and is it art, you know, and what should be done with the others.
click to enlarge

St. Augustine's Confederate War Memorial was an obelisk commissioned by the Ladies' Memorial Association and erected in 1872. In June 2020, St. Augustine city commissioners voted 3-2 in favor of moving the Confederate monument from the Plaza de la Constitucion downtown. The square has since been resodded, with only nearby cannons remaining. In September, the 10-ton monument was lifted onto a flatbed truck, loaded onto a barge, and floated down the St. John’s River to Trout Creek Fish Camp. That private property is where it’s been reinstalled, at the same site as the monument to Confederate Maj. Gen. William Loring.
Photos by George Barker/Library of Congress (left) and Melissa Lyttle (center and right)
What are you hoping your audience ultimately walks away thinking or feeling after spending time with this project?

I guess, personally, it would be an exhale and that "it's about time" feeling that I hope that they're left with. It's time that this country sort of has a real reckoning and a real conversation about the white supremacy that has always been upheld.