Ultra Music Festival Will Return to Downtown in 2022 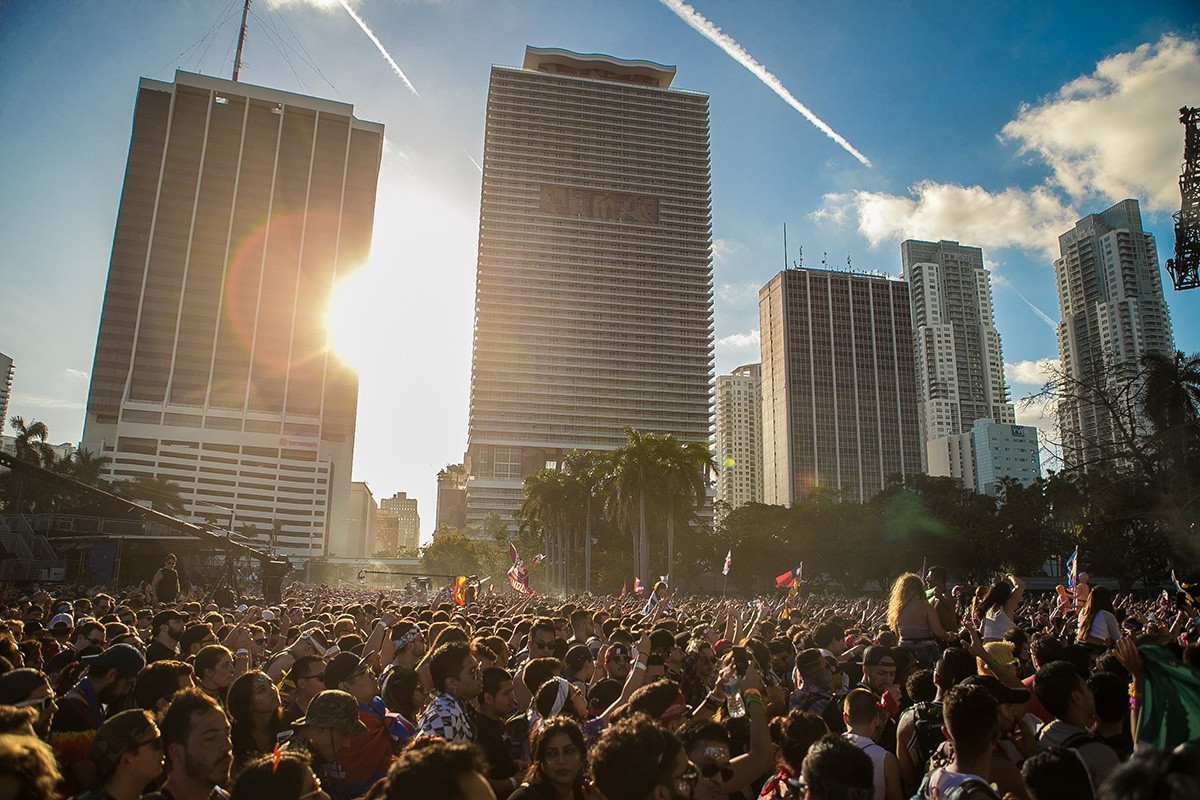 Photo by George Martinez
The crowds at Bayfront Park during Ultra Music Festival 2018.
At the start of March 2020, when the realities of COVID-19 were just beginning to place what would become a yearlong chokehold on the global concert industry, it seemed for a moment like Ultra Music Festival might never again return to its longtime home at Bayfront Park. The pandemic was only the latest obstacle for organizers of the long-running EDM event, who at that point were already two years into a battle with the wealthy residents of downtown Miami who'd been outspokenly opposed to the prospect that one of the city’s largest — and loudest — annual music events would return to their neighborhood each spring.

In the 15 months since the multiday event was postponed by the pandemic, Ultra organizers and the Downtown Neighbors Alliance (DNA), the association that represents roughly 30,000 residents who live in the condominiums in the Central Business District and the Park West neighborhood, have managed to put aside their differences and the legal discourse that has hovered over the festival since 2018, opening the door for Ultra’s return to Bayfront Park as the concert industry gradually awakens.

Ultra, which first took place at Miami Beach’s Collins Park in March 1999 in front of 7,000 people, has spent the past two decades growing to the point where organizers welcomed 165,000 attendees from more than 60 countries to Bayfront Park in 2017. The 32-acre park’s prime location in the heart of a city famous for its vibrant nightlife helped Ultra ride the tidal wave of increasing EDM popularity. Its annual itinerary, which runs alongside the equally popular Miami Music Week, makes mid-March one of the city’s busiest periods of the year for entertainment tourism.

But in the loud and crazy world of urban-based music festivals, one fan’s party is a local resident’s sleepless nightmare.

Downtown residents — specifically those who live in the dozen or so condominium towers close to Bayfront Park where Ultra transpired from 2001 to 2005 and from 2012 to 2018 — had to deal with noisy, bass-driven decibel levels and tens upon tens of thousands of music fans who flooded their neighborhood sidewalks.

The relationship between Ultra and the DNA reached the breaking point following the enormously successful 2017 event.

In March 2018, the Miami Herald reported that the DNA was pushing for the Bayfront Park Management Trust (which runs the park independently of the city) to double Ultra’s leasing fee to $2.5 million per year going forward. Ultra organizers responded by announcing plans to return to Bayfront Park once again in 2019. A few months later, however, the Miami City Commission voted unanimously against offering Ultra a five-year lease to return to the park, even though the festival brought in an estimated $168 million into the local economy and created 1,834 jobs in 2018, according to a June 2019 Billboard report.

“They shut down major portions of the park from March 1 to late April for the setup and taking down of Ultra,” former DNA president Amal Solh Kabbani once said of the festival’s impact on the access downtown area residents have to Bayfront Park. “That is prime time to be outside in our greenspace. If you could see how that poor park is abused, you would cry.”

In response to the September 2018 vote, Ultra took the party to nearby Virginia Key Beach Park and Miami Marine Stadium Flex Park for its 2019 event, which resulted in even more headaches for the festival, mainly due to poor event transportation logistics and public outcry from local environmentalists.

Heading into the latter half of 2019, Miami City Commissioner Keon Hardemon attempted to play peacemaker, sponsoring a resolution to negotiate Ultra's return to Bayfront Park. That July, the city commission narrowly voted 3-2 to authorize the city manager to negotiate an agreement with Event Entertainment Group (EEG) to allow Ultra to return to Bayfront Park in 2020. To do so, Ultra organizers had to pay $308,000 in money owed to the city. Organizers also agreed to lower the noise levels from 110 dB to 102 dB, remove one of the multiple stages set up around the park, set a midnight curfew on Friday and Saturday nights (10 p.m. on Sunday), leave the Bayfront Park’s children's park and dog park open for public use, and cap the daily capacity at 55,000 attendees. The city also reportedly maintained the power to cancel the festival each year — in the event of, say, a global health pandemic.

Despite the momentous agreement, Miami city administrators and Ultra were slow to reach a 2020 leasing agreement by November 2019, and by January 2020 residents affiliated with the DNA had reportedly hired attorney Sam Dubbin to file a complaint in Miami-Dade Circuit Court to invalidate the commission’s July 2019 vote.

In a weird twist of fate, the quiet year sans concerts appears to have been just what the music doctor ordered. After months of negotiations that began in summer 2020 and continued until this past April, Ultra and the DNA finally settled their differences, putting an end to future opposition and litigation.

Ultra spokesperson Ray Martinez was quoted in a May 2021 announcement saying, “This development finally opens the door to establishing an ongoing working relationship between the parties, which was long overdue. Ultra’s leadership was privileged to work closely with local residents in striking the balance between accommodating local residential lifestyles and hosting large-scale and state-of-the-art music productions in Miami’s urban core.”

Martinez continued, “Maybe the COVID pause gave both sides an opportunity to kind of take a breath, if you will, and come to the table without the impending event looming over either side. We really tried to work on the solution so we could coexist.”

As of this week, it remains unclear whether Ultra has yet to officially sign a lease to use Bayfront Park for the festival’s planned return dates: March 25-27, 2022. An Ultra spokesperson declined to offer further comment to New Times when asked about the status of the 2022 event. The Downtown Neighbors Alliance was also unable to provide any details beyond what was disclosed in the May 2021 announcement. Bayfront Park Management Trust's executive director, Jose Solano, tells New Times that the park was not involved in the negotiations between Ultra and the city and that he could not provide comment.

Regardless, the recent agreement appears to have paved the way for Ultra’s return to Bayfront Park and sets a peaceful precedent for other concerts and festivals at the park as in-person events return from their pandemic-induced hibernation. Bayfront Park’s 8,500-seat permanent concert venue, FPL Solar Amphitheater, reopened for business at full capacity when the Black Eyed Peas took the stage on June 4. The venue, owned and operated by Live Nation since 2008, has welcomed several high-profile performers in recent years, including Kanye West, Dua Lipa, Rüfüs Du Sol, and President Donald Trump. Only two events are on the books at the amphitheater for the remainder of 2021; one is a concert by rapper Trippie Redd, scheduled for September 19.

Although it remains to be seen whether Ultra will indeed materialize downtown next spring, the festival’s noisiest days, legally speaking, are appear to be behind it. Team Ultra can now focus on cementing the festival's status as one of the premier EDM events in America as the concert industry creaks back to life.