Photo courtesy of David Winker
Last year, construction finished on an apartment building next to Maureen McCarthy's single-family home.
When Maureen McCarthy and her daughter want to enjoy the pool at their house in Silver Bluff, they have to check first to see if they have an audience. Less than two feet from their home in the suburban Miami neighborhood sits a four-story apartment building with balconies that overlook their backyard.

In January 2019, builders broke ground on Silver Cove Lofts, an 18-unit apartment building next to McCarthy's single-family home. The complex, which was completed last year, lies smack-dab in the middle of a small suburban street off of US-1 otherwise lined with low-scale single-family residences.

McCarthy, a professor at Miami Dade College, says the space between her property line and the apartment building is only about 20 inches, and her backyard is literally within spitting distance of the neighboring balconies.

"When I sit in my Jacuzzi, I can hear every single thing they're saying. They could spit into my Jacuzzi if they wanted —or something else," McCarthy tells New Times.

In the two years that the building was under construction, McCarthy says, she had to contend with dust and debris from the site. She says two-by-fours and nail-ridden metal fell from the worksite onto her patio and that workers broke a hole in her fence. Her patio umbrellas, pool tiles, door, fence, and walls were splattered with stucco from the construction, she says, and much of it is still caked on today, including a large blob on her washer.

"It looks like they had a snowball fight with cement on my washing machine," she says. 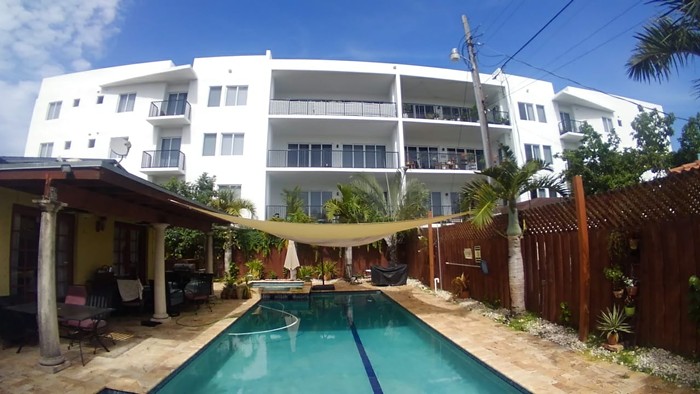 Maureen McCarthy had to install a canopy over her pool after a four-story apartment complex was built less than two feet from her property line.
Photo courtesy of David Winker
Attached to the court complaint are photos of the various pieces of construction debris that McCarthy found in her backyard: plywood, rusted metal wires, and scores of stucco splotches that rendered the outside of her home the equivalent of an industrial-scale Jackson Pollock painting. (A copy of the complaint is embedded at the end of this article.)

McCarthy has video footage of some of the construction damage, captured by security cameras she installed to prevent work crews from trespassing. In one clip, a large bundle of insulation can be seen tumbling over her fence and into her pool area. Another video shows work crews dropping debris from the top of the apartment building using a wheelbarrow, allowing dust to blow into neighboring yards.
Once, while teaching an online class from her bedroom, McCarthy says, she could see construction workers hosing dust off her car and placing a plastic tarp over it without consulting her, despite the "No Trespassing" signs in front of her house.

"I'm in my bedroom, and I see four guys washing my car. They never knocked on my door," she says. "It sounds like they were being nice, but they were taking a very easy way to avoid damage, and you can't do that when people have No Trespassing signs." 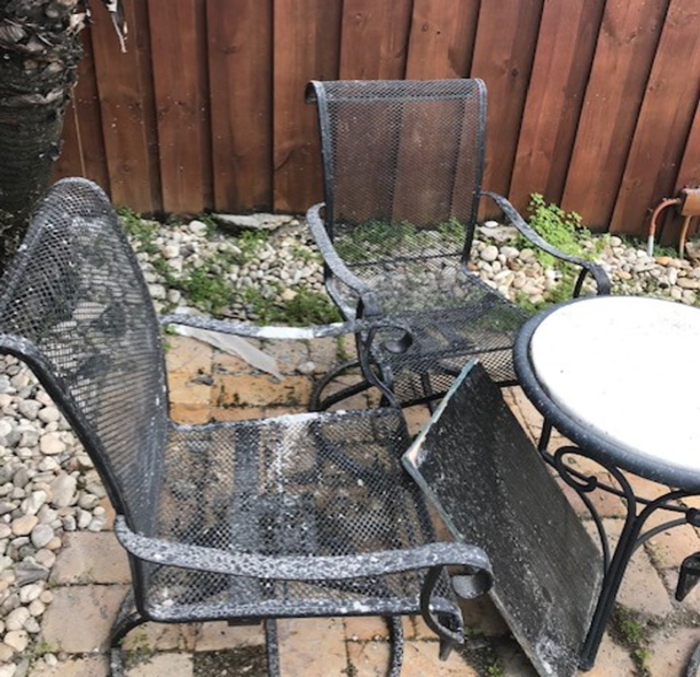 Photo courtesy of David Winker
A representative for Star Brite and Silver Cove Apartments tells New Times that they've tried to be good neighbors and that any damage was caused by Star Brite's subcontractors. While they have not yet received the court complaint, the representative asserts that the property owners met with McCarthy and her attorney, David Winker, last year and offered to fix the damage but never heard back from her with a proposal for costs. (Winker tells New Times the property owners were rude to McCarthy and hostile during the meeting, so they did not send a cost proposal.)

While surrounding properties are zoned only for single-family homes, under the Miami21 zoning code, developers are allowed to build higher-density, multifamily apartment buildings and retail spaces on McCarthy's block.

Winker says his client's case is only one example of Miami-Dade County's growing issue of rampant development encroaching on existing neighborhoods. In nearby Coral Gables, a man's single-family home has been practically swallowed up by a large-scale complex.

In McCarthy's neighborhood, parking has been a particular pressure point. On a recent weekday, signs were posted in front of a number of houses that read: "There is a parking problem [on] SW 25 Terrace. We demand responsible, controlled development."

McCarthy says that since the apartment building opened up, tenants and their guests have been parking on the narrow street. Some have approached McCarthy's neighbors asking to rent their driveways, though she has managed to ward off any such requests with a sign that makes her position clear. 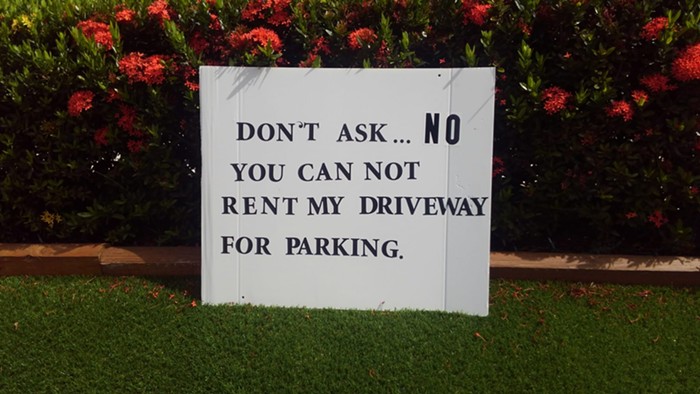 Maureen McCarthy had to let tenants of a neighboring apartment building know her property is not for rent.
Photo courtesy of David Winker
Silver Cove's representative, who did not want to be identified by name, says that although the zoning code only requires the building to have 27 spots, the property owner has added three additional parking spaces and has plans to build more. The building has one guest parking space, and the representative says guests are allowed to park on the swales on the street because they are city property.

The rep adds that the company was within its rights under the zoning code to build the apartment building and that the rest of the block will likely see more upscale development in coming years because of its proximity to the Underline. They say McCarthy's grievance should be with the city and its zoning code, not with Silver Cove.

Winker fears that more large-scale development in small-scale neighborhoods like McCarthy's is bound to happen, and he says suing for damages is one of few ways property owners can protect themselves and assert their rights.

"Development begets more development. Now we have this growth, and it's gonna beget more growth. No one wants to have a single-family residence next to a four-story giant," Winker says.