Photo by Monica Garrido for Lovvettt
The Lovvett app pairs hungry Miami residents with reduced-price fare that would otherwise end up as unnecessary food waste.
What if your favorite lunch spot found a new way to utilize its end-of-day food rather than toss it in the garbage?

That's a question a Coral Gables couple asked themselves after realizing just how much daily food waste the average South Florida restaurant, bakery, or grocer produces. Rather than wait for an answer, the husband-and-wife team used their time during the pandemic lockdown to create their own solution.

Today, Rafael and Monica Garrido are doing their part to help heal the planet with Lovvett, an app that connects local consumers with nearby food businesses selling fresh surplus produce and other food products.

According to the U.S. Department of Agriculture's Economic Research Service, an average of 30 to 40 percent of all food produced in the U.S. becomes waste. "Even if everyone in need was fed, still there would be surplus that ends in landfills, and restaurants are one of the primary sources of food waste," says Rafael.

The couple says the idea for Lovvett was spurred by their thrifty upbringing in Europe, where food waste was not as common as it has become stateside.

"Our families were very thrifty, and we were both brought up with the idea that we should reuse as much as possible," Rafael tells New Times. "My parents were born in the aftermath of the Spanish Civil War, and I was taught that what little we had was always used. Wasting something was like a sin. When we landed in the states ten years ago, we were shocked to see how much food was going to waste. We felt it didn't have to be like this, and there was a better way."

The couple says Lovvett does more than help the environment — it also provides local businesses with a way to turn excess food into a new revenue stream. Restaurants can join for a commission-free 45-day trial and pay a 7 percent commission thereafter. 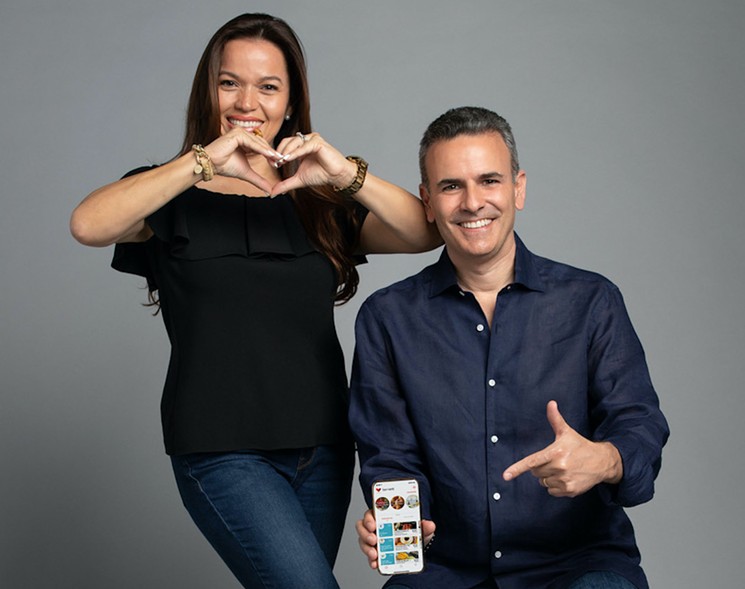 Monica and Rafael Garrido are the Coral Gables couple behind Lovvett, an app devoted to reducing food waste in Miami.
Photo courtesy of Lovvett
In addition, Lovvett offers local consumers a way to purchase high-quality food that might otherwise go to waste — often from some of the area's most popular restaurants — for less than the cost of a fast-food meal.

Open the app now and you'll find deals that offer up to a 50 percent discount compared to the average retail price. Many retail partners will also create their own Lovvett bags, notes Monica — everything from a sweet or savory box of goods from a local bakery to a prepared meal from a popular Miami Beach restaurant — often for half-price.

Although prices change daily according to volume and availability, past deals include a $6 basket of baked goods from Sullivan Street Bakery that normally retails for $10.50, the "305 Burger" from Clutch Burger with fries and a soda for $10 (normally $20), a half-dozen doughnuts and a 12-ounce coffee from Honey Bee Doughnuts for $13.50 (normally $30), and a margherita pizza and soda from IT Trattoria for $9 (normally $15).

"Because Miami is a cultural melting pot, almost every ethnic cuisine is represented," says Rafael. "There is even a filter on the app for any food allergies."

The two say they hope ultimately to grow Lovvett even beyond South Florida. For now, though, the application will focus growth efforts locally, starting with local delivery (the application currently operates via local pickup only) as well as regular menu offerings from participating restaurants alongside the one-off surplus deals.

"Lovvett is our passion project, born from our love for the environment, food, and people," says Monica. "And the idea of doing something that can make a difference. Our goal is to help make everyone a conscious consumer, while also making it easy for anyone to get involved in contributing to building a more sustainable community."