In honor of Women's History Month, nonprofit art space Centro Cultural Español de Cooperación Iberoamericana will virtually screen the documentary Role & Role, free of charge. The film, directed by Spanish director, writer, and actress Chus Gutiérrez, centers on the female role model and ponders how the media's portrayal of women can help or hinder the pursuit of women's equality. The documentary is in Spanish with English subtitles. 9 a.m. Thursday through midnight Friday; ccemiami.org. Admission is free with RSVP via eventbrite.com. Olivia McAuley

Pile into the car and take your family on a prehistoric journey at Dinosaur Adventure on the Miami-Dade County Fairgrounds. You'll drive through an experience filled with 80 life-size dinosaurs, including a 40-foot T. rex, 30-foot brachiosaurus, as well as triceratops and velociraptors. Learn more about each dinosaur species and recent scientific discoveries as you watch them from your car windows. For kids, optional adventure packs filled with dino-themed goodies are available for purchase. Through Sunday, March 21, at the Miami-Dade County Fairground, 10901 SW 24th St., Miami; dinosauradventure.com. Tickets cost $49 to $129 per vehicle. Suzannah Friscia

HBO Def Comedy Jam alum Marvin Dixon will headline at the GlassHouse Comedy Experience at the Historic Lyric Theater on Friday, alongside opener Kitchen (AKA FatandFunny) and featured comic K. Dubb. Dixon's performance marks the long-awaited return of the 305 native, who now lives in Atlanta. The event, known for its no-holds-barred approach to comedic performances, welcomes to its stage up-and-coming comics along with established veterans. 7:30 p.m. Friday, at the Historic Lyric Theater, 819 NW Second Ave., Miami; 786-708-4610; bahlt.org; Tickets cost $17.55 to $35 via eventbrite.com. Olivia McAuley

Local band Xperimento has played with the likes of Prince and Ricky Martin, performed at Super Bowl LIV, and been nominated for three Latin Grammys for its self-produced EP Diferente. On Thursday, the band's five members, who hail from Puerto Rico, Argentina, Colombia, Cuba, and Venezuela, will bring their signature blend of global musical influences to the Arsht Center's Live on the Plaza series. Prepare to fill your ears with the rhythms of Latin, reggae, urban, cumbia, and soul. 7:30 p.m. Friday, at the Arsht Center for the Performing Arts, 1300 Biscayne Blvd., Miami; 305-949-6722; arshtcenter.org. Tickets cost $15 to $60. Suzannah Friscia

Activist, organizer, and artist Bree Newsome became a household name in June 2015 when, in the wake of the murder of nine Black parishioners at Mother Emmanuel Church in Charleston, she went to the South Carolina statehouse, climbed the 30-foot flagpole, and pulled down the Confederate flag in protest. She was arrested, but soon after the incident, Gov. Nikki Haley signed a bill permanently removing the flag. The ACLU of Florida hosts Newsome at a special online event, where she'll discuss topics like civil disobedience, the relationship between activism and art, and her work in the fight against racial injustice and discrimination. 6:30 to 7:30 p.m. Saturday; aclufl.org. Admission is free with RSVP. Suzannah Friscia

Singer-songwriter Yoli Mayor, whom you might recognize from her run on America's Got Talent, will bring her vocal talents to the garden at Smart Bites to Go for an evening performance. Bring a blanket and enjoy a healthy organic meal under the stars as you listen to the stylings of the alternative R&B and soul artist, who will soon self-release her first EP. Facemasks and social distancing will be strictly enforced. 7 to 10 p.m. at Smart Bites to Go, 791 NW 20th St., Miami; 305-894-6325; smartbitestogo.com. Admission is free with RSVP via eventbrite.com. Suzannah Friscia 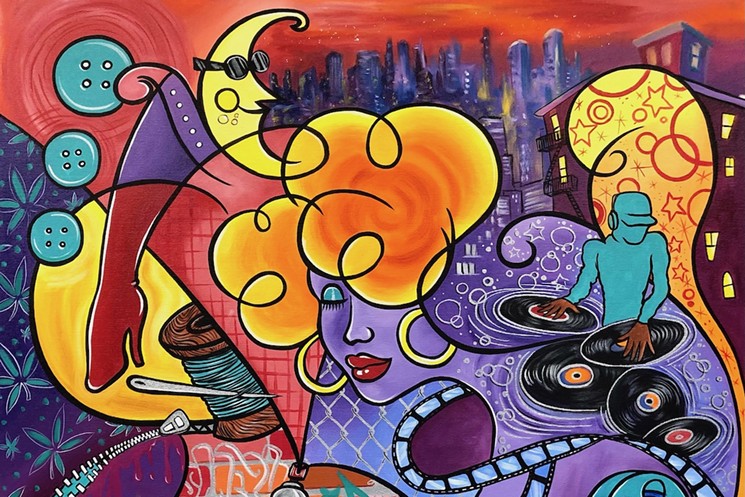 Graffiti artist Lady Pink started painting on New York City subway trains as a teen in the 1970s, participated in her first gallery show in the Bronx while she was still in high school, and had her first solo show at Moore College of Art in Philadelphia at age 21. She made a name for herself in the male-dominated world of graffiti, bringing themes of activism and female empowerment into her art. The Museum of Graffiti looks at the artist's singular career with "Lady Pink: Graffiti HERstory," a solo exhibit of her work on canvas and paper, plus photographs. In addition to showcasing milestones from her career, the show also features Pink's portraits celebrating some of her mentors from the graffiti movement. Through May 20, at the Museum of Graffiti, 299 NW 25th St., Miami; 786-580-4678; museumofgraffiti.com. Tickets cost $16. Suzannah Friscia

Led by Rick Moon, Tiki Flores will play rock 'n' roll covers from across the decades at Gramps on Sunday. Brian Tate, Giorgio Cesaroni, Alejandro Elizondo, and guest drummer Richard Hargett round out the supergroup. Oly Vargas hosts the free event and will be spinning vinyl records interchangeably with Lilian Banderas, whose collection leans toward cool country sounds. While you enjoy the music, sip craft cocktails from the bar and enjoy a slice from Pizza Tropical. 3 p.m. Sunday, at Gramps, 176 NW 24th St., Miami; 855-732-8992; gramps.com. Admission is free. Olivia McAuley

Start your week mindfully with a Monday Meditation at Modern OM Bungalow. Sri Sudarshan, founder of Skylight Yoga, will guide you to observe your mind and the many waves of thought that stir up tension — from memories of the past to anticipation for the future. As you learn to watch the thoughts pass by, you'll experience the sense of calm and freedom that meditation has to offer. You might just leave feeling readier than ever to conquer whatever the week has in store. 7 to 7:45 p.m. Monday, at Modern OM, 5020 NE Second Ave., Miami; 786-617-5056; modernom.co. Tickets cost $20 via eventbrite.com. Suzannah Friscia How can we turn art into activism? Join playwrights Georgina Escobar, Nathan Yungerberg, and Madeline Sayet this Friday evening for a panel discussion dubbed "ARTiculatingClimate: Three Playwrights on the Climate Crisis" to find out how they approach environmental justice through theater. All three panelists were part of the Climate Change Theatre Action 2019, a global series with a mission to spark debate about climate issues. The roundtable discussion, moderated by Chantal Bilodeau of the Arctic Cycle, is presented at no charge by Live Arts Miami, Miami Book Fair, and ARTiculatingClimate. 6 p.m. Tuesday; liveartsmiami.org. Admission is free with RSVP. Olivia McAuley

As part of the Bass Museum's Small Talk Series, the artist and filmmaker Dara Friedman will join executive director and chief curator Silvia Karman Cubiñá for an informal conversation about her career and her work on view at the Bass. The German-born Friedman, who's currently working in Miami, has a structural film and dance background and draws from the everyday to find raw material for her film and video art. 6 to 6:45 p.m. Wednesday; thebass.org. Admission is free with RSVP. Suzannah Friscia