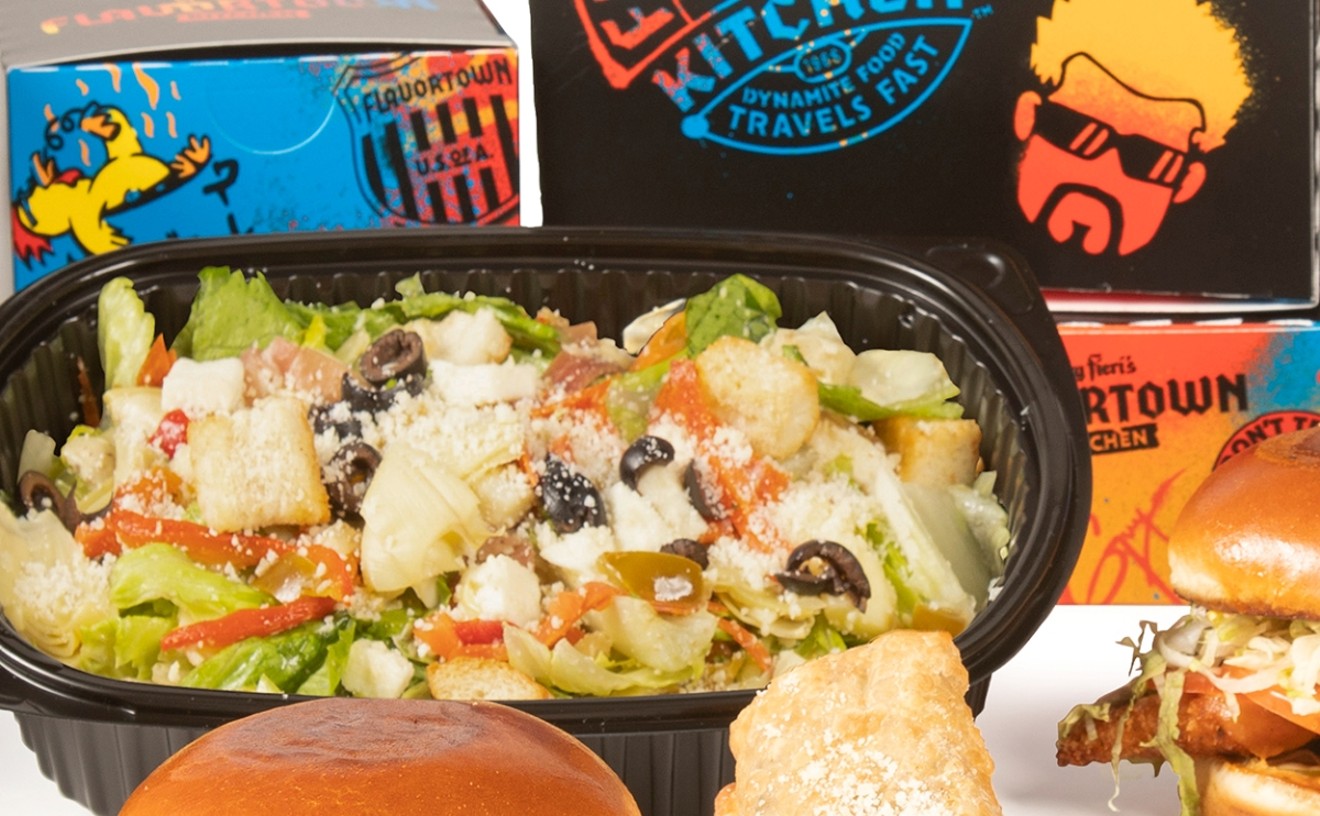 Photo courtesy of Guy Fieri's Flavortown Kitchen
Flavortown comes to South Florida.
In a 2012 restaurant review that will surely go down in history as one of the most scathing and hilarious examples of the genre, Pete Wells of the New York Times attempted to describe what it was like to dine at celebrity chef Guy Fieri's restaurant, Guy's American Kitchen & Bar in Times Square.

The review took the form of an open letter to Fieri wherein Wells posed questions like: "When we hear the words Donkey Sauce, which part of the donkey are we supposed to think about?"  And, "Is this how you roll in Flavor Town?"

The review went viral — to the point where Saturday Night Live's Bobby Moynihan performed a parody of Fieri commenting on the review. (The bit didn't make it past dress rehearsal, but it lives on, thanks to YouTube.)
Eight years later, amid a pandemic, Fieri tiptoed into Florida, as if on cat paws, to open a ghost-kitchen concept called Guy Fieri's Flavortown Kitchen. The venture is a partnership with Virtual Dining Concepts, the Sarasota-based brainchild of Planet Hollywood founder Robert Earl, whose Earl Enterprises encompasses a veritable mall's worth of kitschy, brick-and-mortar chain restaurants, including Buca di Beppo. Flavortown Kitchen maintains a presence in more than 30 states, counts 13 locations in Florida, five of which are in South Florida. (Though none are in Miami, residents of most of Broward County and West Palm Beach are in the coverage area.)

Flavortown Kitchen's menu is heavy on items that sound tasty if you're a frat boy who just did a hefty bong rip.

There's also a "Crazy Cuban" sandwich, sure to offend most Miamians merely for existing.

Among the handful of entrées: Cajun chicken alfredo and a chicken "Parm-a-Roni." Oh, and there are salads, though one wonders why anyone would order a salad from Guy Fieri.

For dessert, there's something called the "Cheesecake Challenge" that tops a slice of cheesecake with salted potato chips, crushed pretzels, and fudge sauce ($8) and a "Choco Whiskey" cheesecake (also $8) that slathers a cheesecake in salted whiskey caramel sauce and a crumbled toffee bar.

In the spirit of experimentation, New Times sampled Fieri's wares.

We ordered a "Chicken Guy!" sandwich, Flavortown fries, the queso, and (of course we did) the "Crazy Cuban."

Orders can be placed directly via the Flavortown website or through third-party delivery apps like GrubHub, DoorDash, Postmates, Uber Eats, and Seamless. We ordered through the website, and Postmates arrived with the food within about 40 minutes.

It should shock no one that the Cuban sandwich ($10) isn't exactly authentic. For one, the bread is much softer than traditional Cuban bread. That being said, the ham and roast pork were flavorful and the sandwich was pressed well. It was a well-made pressed ham and cheese — or an acceptable facsimile of a Cuban sandwich for a Guy Fieri fan ordering from, say, the Flavortown Kitchen in Midvale, Utah. Not everyone in the USA has access to a million Cuban restaurants, after all.

The "Chicken Guy!" sandwich ($12) was A! Pleasant! Surprise! The chicken breast was plump, the coating not too salty and with just a hint of pepper. Served on a buttered brioche, it was a fine fried-chicken sandwich. The only misfire was the shredded lettuce, which got wilted and warm in transit. The Flavortown fries ($5) were golden brown and nicely crisp.

It arrived with a side of chips that were thick and dusted with a sweet/spicy coating that imbued them with the flavor and consistency of cinnamon pita chips. The queso, which looked promising, was...bad. One dip was all it took to reach a verdict. A second dip would have been inedible. The queso tasted sweet and artificial — as if our ghost chef had added sugar to Velveeta.

Is a trip to Flavortown right for you?

Sure. The packaging is Instagrammable, the food is fast and easy, and the chicken sandwich is superior to many others that cost more. But the queso? Avoid it. It may be where Fieri hid the rest of the donkey.