Photo by Melody Timothee
99 Jamz radio personality Supa Cindy recently debuted her fourth cypher.
Cyphers have long been a part of the legacy of hip-hop. From the gritty New York freestyle battles of yesteryear that chiseled rap’s vanguard to the current showcases that illuminate rising stars, cyphers are as synonymous with hip-hop as palm trees are with Miami. Bridging the former with the latter, 99 Jamz radio personality Supa Cindy introduces some of Miami’s most promising lyricists in her latest battle round, Miami Cypher 4.

Providing a platform for budding local talent, Supa Cindy first presented her Miami Cypher series back in 2016, featuring the likes of Kiddo Marv and Ball Greezy. Since then, she has focused on scouting talent from every crevice of Miami’s rap scene. In 2017 she emceed an LGBTQ+ cypher, recruiting Love & Hip Hop: Miami cast member Bobby Lytes; and in the third round of Miami’s freestyle heavy-hitters, she placed emphasis on the ladies.

“It was something me and my boyfriend were doing together just to get the public familiar with who [the artists] were. At the time, I wasn’t playing the Miami Cyphers on the radio because I didn’t think it was a song that could get played on the radio. It’s a cypher with everyone doing bars,” the Afternoon Get Down host recalls.

This time around, she debuted the single on the radio, enlisting artists from her Sunday-night radio segment with 99 Jamz program director Jill Strada, 99 Jamz Next Up. Since its release last month, the E.C. Fresco-produced cypher has earned accolades from industry moguls Missy Elliott, Timbaland, and DJ Khaled.

While Supa Cindy plans to evolve the cyphers into a multicity series, these emerging Miami rappers from Miami Cypher 4 are just getting started.

King Hoodie slices through the naysayers in his freestyle.
Photo by Melody Timothee

Hailing from North Miami Beach, King Hoodie laces his freestyle with storytelling and clever wordplay. He spits verses that flirt with life’s adversities and a hater’s girlfriend, all while maintaining a razor-sharp flow. He slices through doubt with his confidence intact, a trademark that’s already gotten him a cosign from one of rap’s finest provocateurs, Cardi B.

Representing a small town in Palm Beach County, this Belle Glade native lets the world know he’s not to be underestimated. He eases into the cypher with the delivery of a vet who hasn’t lost his appetite for dominating opponents. Between gritty verses, the self-proclaimed Prince of the South proudly flashes his grills, letting you know he’s 100 percent Florida and bites back when provoked.

Tafia towers over his rivals — literally. His ominous voice demands respect while his braggadocio and references to Dade County, scammers, and Zoes signal his hometown, North Miami. A new signee to Meek Mill’s and Roc Nation’s Dream Chasers Records, Tafia shoots lyrical flames at anyone trying to stop him from reaching the top. Maintaining a relaxed composure, he snarls at cowards over an uptempo loop: “If nothin’ shaking, bitch it’s Halloween. I’m a robba.” A warning that he's not someone to be messed with. 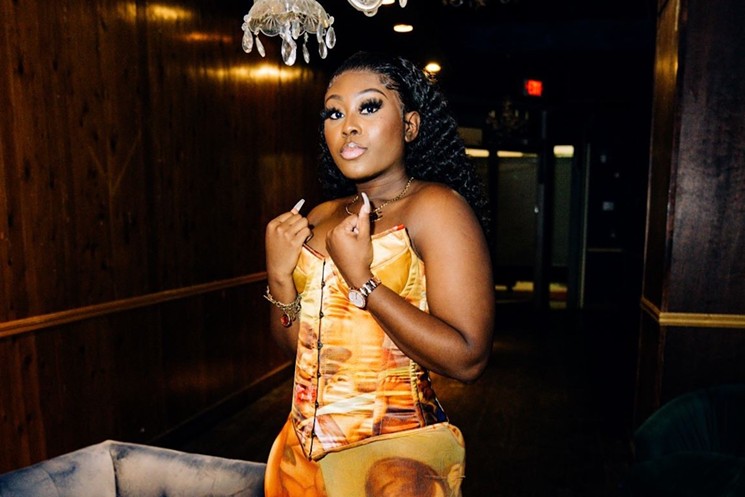 Breaking up the macho bravado with femme fatale energy, Tierra Traniece goes toe to toe with her male peers: “Don’t need a man for nothing/They come to me for the traction,” she raps over a thumping beat. The poet-turned-rapper trades prose for punch lines in the cypher and proves she has a stake in the Miami rap scene among her predecessors Trina and City Girls. Describing her music as “sophisti-ratchet,” the Liberty City native bounces between classy and cutthroat verses.

Rondo Smiff (left) and Mike Smiff perform as a brother duo in the cypher but still hold their own as solo artists.
Photo by Melody Timothee

This brother duo holds their own whether they’re performing solo or together. Slip N Slide signee Mike Smiff refuses to compromise as he spits venom to anyone who dares to cross him: “If you play with fat boy, niggas know it’s hamma time." Rondo Smiff doubles down on his brother’s warnings with a melodious flow and just as much audacity: “Walking through the valleys of shadows of death without a shirt.” As they take turns blazing through slick bars, Mike and Rondo Smiff work in tandem to amplify one another and the rap crème de la crème of the 305.