The Six Most Patriotic Moments From the Conservative TPUSA Conference 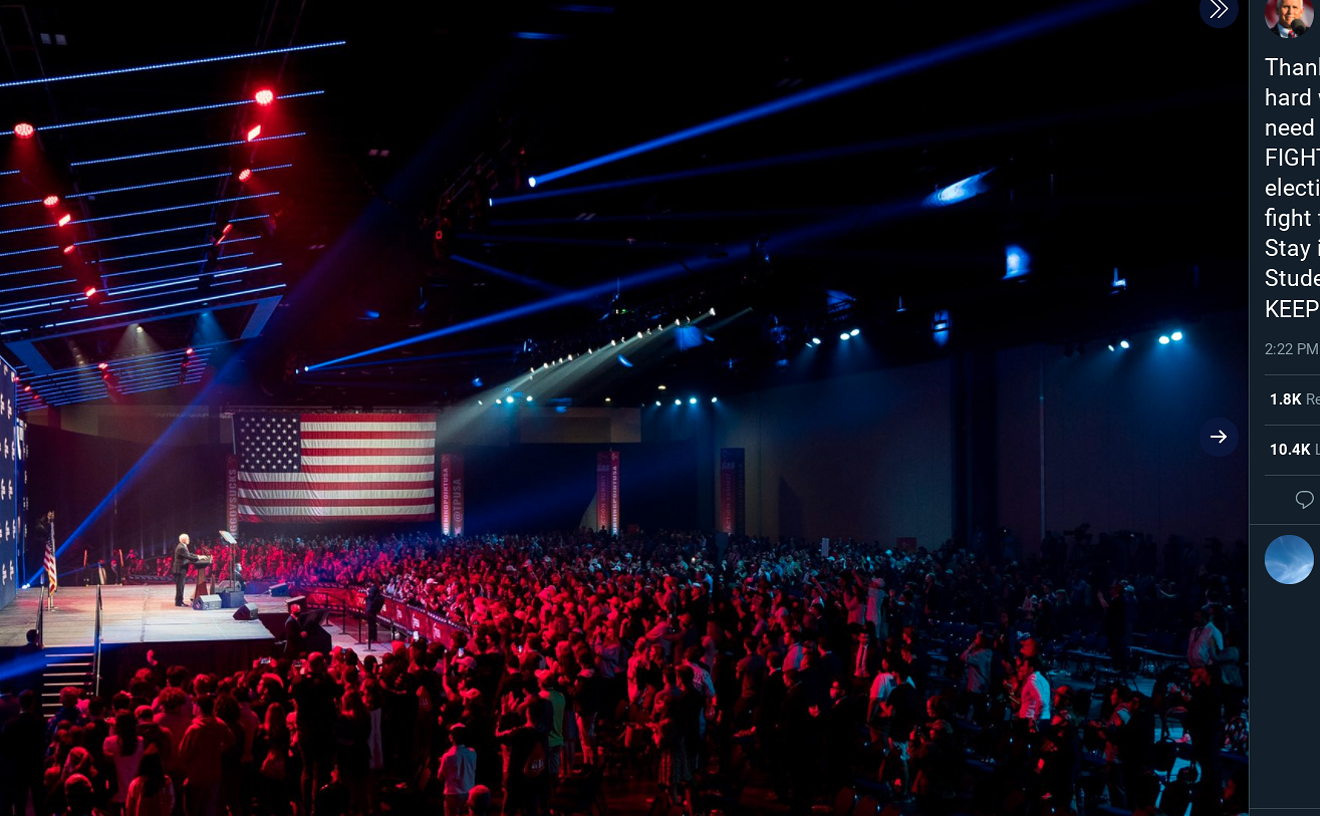 Screenshot via Vice President Mike Pence /Twitter
Vice President Mike Pence addresses a crowd at the Palm Beach Convention Center.
More than 2,000 young American patriots swarmed the Palm Beach County Convention Center this week for a four-day conference organized by Turning Point USA (TPUSA), a right-wing organization that aims to enlighten high school and college students about the wonderful world of conservatism while railing against the evils of liberalism.

The students, ranging in age from 15 to 25, had their nascent minds prodded by a who's who of elite guest speakers, including Donald Trump Jr., Trump campaign finance chair Kimberly Guilfoyle, and Fox News personality Tucker Carlson.

The event flouted COVID-19 safety guidelines with gusto. Going maskless in a huge crowd of fellow non-believers — Grandma be damned — is as inalienable a right as life, liberty, and the pursuit of happiness. Only a true American has the courage to flip the bird to the U.S. Centers for Disease Control and Prevention.

Here are some of the most patriotic moments from the TPUSA conference.


Shouts of “let us in” tonight at Turning Point USA in West Palm Beach, annual gathering of conservative college students.

County owns the convention center. Officials said yesterday they had an agreement with TPUSA that included COVID precautions.

The students, crowded together and angry, chanted, "Let us in!" Because Big Government sucks, their demand went unmet.

Instead, Donald Trump Jr., Tucker Carlson, and others went outside to address the students. Later in the day, Charlie Kirk angrily tweeted, "OPEN AMERICA NOW."


Here’s Matt Gaetz in a confined space, indoors, maskless, gathering with others during the holidays — and being a jackass...pic.twitter.com/2dv4prow1w

The congressman was criticized for not wearing a mask in the confined space, but Gaetz defended himself on Twitter, claiming that he's not a threat to anyone because he recently tested positive for COVID-19 antibodies. The U.S. Centers for Disease Control and Prevention says antibodies can protect against reinfection, but experts don't know how long the protection lasts or how much protection the antibodies provide.

Listening to Gaetz's voice, one might advise him to keep his day job. But seeing as his day job involves being a menace, maybe he should consider a gig as a fiddler in an old-time string band.


Looks like there is a money cannon at TPUSA’s winter conference??

Bang Energy models shoot money out of a cash cannon. Conservatives are generally opposed to handouts. Free healthcare? In your socialist dreams. Student loan forgiveness? If you chose to take out loans for tens or hundreds of thousands of dollars, you shouldn't have spent so much on avocado toast.

Diving for dollar bills shot out of a spinning cannon by pretty women in tight leggings? Fire when ready!

Not everyone was having it, though. Conservative commentators railed against the money stunt on Twitter, arguing that TPUSA should be focusing more on Jesus, faith, and family.


the moment that Trump called into the Turning Point conference is pretty funny pic.twitter.com/pmdnNiHc7q

Trump reminds his adoring fans that HE WON. While TPUSA founder Charlie Kirk gave a speech on Monday, someone ran onstage in a frenzy. The guy handed Kirk a cell phone, and Kirk put the call on speaker.

It was Donald Trump. "Hi Charlie, how are you?"

Trump, of course, used the opportunity to falsely claim that he won the election by a landslide and to call on the U.S. Department of Justice to "finally step up." Because nothing screams patriotism like trying to steal an election.

Mike Pence courageously defends Trump's honor. On the final day of the conference, Vice President Mike Pence encouraged the students to "stay in the fight" for the presidential election.

Pence warned the callow youths that they must "be a check on what the Democrats and the radical left want to do." He explained that Democrats "want to make rich people poorer, and poor people more comfortable." They must be stopped!