The Colombian producer always dreamed of becoming the hitmaker behind the star — just like his idols Timbaland and Pharrell Williams.

“I was always drawn more towards those types of personalities,” says Rompiendo (AKA Alejandro Ramirez) over Zoom from his home in Miami. “Of course, I like artists and want to be in that camp, but I never wanted to be the first guy you see. I was interested in working behind-the-scenes. I was the kind of geek who would read the credits [on albums].”

This “geek,” who bounced in between Medellín, Colombia, and Miami as a kid, would go on to become the right-hand man for global icon and fellow Colombian J Balvin. Rompiendo now sees his name listed in the credits of some of the biggest songs in Latin urban music, including Balvin’s "Ginza" and "Ay Vamos."

Thanks in part to his alliance with Balvin and the current Latin music boom, Rompiendo is experiencing the sort of fame that was once rare territory for reggaeton producers.

On Saturday, December 19, Rompiendo will close out Red Bull's Estados Unidos de Bass livestream event, which he also kicked off in Miami earlier this month, along with fellow producer Ovy on the Drums. This is the second year in a row that Rompiendo has performed at the Latin music-focused event.

Next year, Rompiendo plans to release his first album — sort of a "Sky Rompiendo presents"-type album full of features. It's a project he admits that his fans have been clamoring for.

"I’m here for that pressure from the people," he says. "I started the new album recently and will be putting out singles real soon. It’s not me singing. I’m the producer presenting friends and other artists that I listen to. I’ll drop some vocals, but that’s not the main idea of the project.” 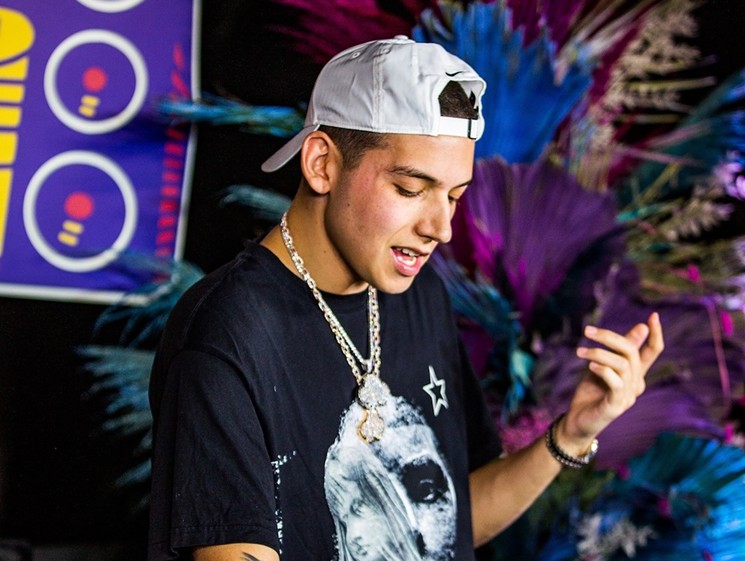 Sky Rompiendo performing at Estados Unidos de Bass on December 5.
Photo by Ian Witlen/Red Bull Content Pool
That's not to say Rompiendo hasn't jumped on the mic before. He can be heard rapping with Balvin on “Verde," the song off of Balvin's Colores, winner of Best Urban Album at last month's Latin Grammys.

“We’re family,” Rompiendo says of Balvin. “With family, you get comfortable and do things like this. I wanted people to know I can jump on the mic. And I thought it would be fun to be in the video. But it’s not my everyday. It’s not why I do this.”

Besides Balvin, Rompiendo — who has six Latin Grammy awards to his name — has worked with Nicky Jam, Bad Bunny, Karol G, and Juanes. How does working with a rocker such as Juanes compare to working with a reggaeton artist such as Balvin?

“It’s very different. First, because of the music they do. Second because of their age,” says Rompiendo, referring to the 13-year age gap between Balvin and the older Juanes. “Juanes has more years in the studio, so I’m sort of like a student when I’m with him. With Balvin, it’s more of a brother thing. But the creative process always gets us to the same point.”

Rompiendo has also dabbled with working with English-language acts, with a goal of crossing over in the near future. After all, he says hip-hop is the music he most listens to.

So far, Rompiendo has coproduced Travis Scott and Rosalía’s "TKN," which peaked at number two on the Billboard Hot Latin Songs chart, and cowrote Balvin’s "Safari" collaboration with Pharrell Williams and BIA. Working with Williams was a reminder for Rompiendo of how far he’s come. (He says he used to study videos of Williams in the studio on YouTube.)

But as much as Rompiendo has seen his profile rise, he says his fame is still manageable, especially compared to that of the many of the artists he works with.

“It’s not like people are always asking me for a picture or want to know everything about me, like what I eat in the morning,” Rompiendo says. “It’s been positive.”