©Kenneth Ek
To Disarm: Ella Fitgerald Teapot (II), 2020, is by Philadelphia-based ceramicist Roberto Lugo, presented by Kieran Wexler Gallery.
When it launched in 2005, Design Miami was intended as a companion design fair to the internationally acclaimed Art Basel Miami Beach. But with Art Basel having gone virtual this year, the annual design fair and brainchild of Dacra’s Craig Robins, which is returning November 27 through December 6 as Design Miami/ Podium at the Moore Building, is destined to be a focal point of a socially distanced Miami Art Week.

For starters, there will be quite a few fresh faces at this year’s show, including several locals.

Vivian Carbonell, of Carbonell Design Studio in Little River, is exhibiting at the fair — and at Miami Art Week as a whole — for the first time in her career.

According to Carbonell, the pandemic has allowed her to focus more on the story of her work versus the purpose alone.

“Having this time now that has forced us all to slow down is an artist’s best-case scenario,” Carbonell says. “It’s a pause from that frenzy. We’d created this pace that we couldn’t even keep up with. Being in Design Miami is the silver lining for me. It’s not lost on me that we are in a pandemic, but it gave me the opportunity to show at Design Miami."

It’s that intention that may have affected the fair most of all.

With the fair usually focusing on objets d'art and furniture, "America(s)" and its topical references are somewhat unexpected.

Power to the People, a collection of ten walking sticks with clenched fists from the 19th and 20th centuries.
©Olde Hope
“[It’s] the notion of America, whether it’s the United States or the territories or what America feels like to different people,” says Design Miami CEO Jen Roberts. “A few examples are Shaker boxes, Native American material, American folk art — it’s all material that often conveys a message or is representative of a group or a skill set you wouldn’t expect to see in Design Miami.

“[America has] always meant different things to different people, so we thought it was a really interesting story to tell through design — and it’s not just American design. It comes from all over the Western hemisphere.”

Visitors can also expect to see more of the traditional 20th-century pieces and celebrity designers — like the Haas Brothers and Katie Stout — traditionally seen at the fair but juxtaposed with contemporary designers and Americana.

The most unexpected draw: two rare dinosaurs excavated in Wyoming. (A similar dinosaur recently sold at Christie’s for about $30 million.) 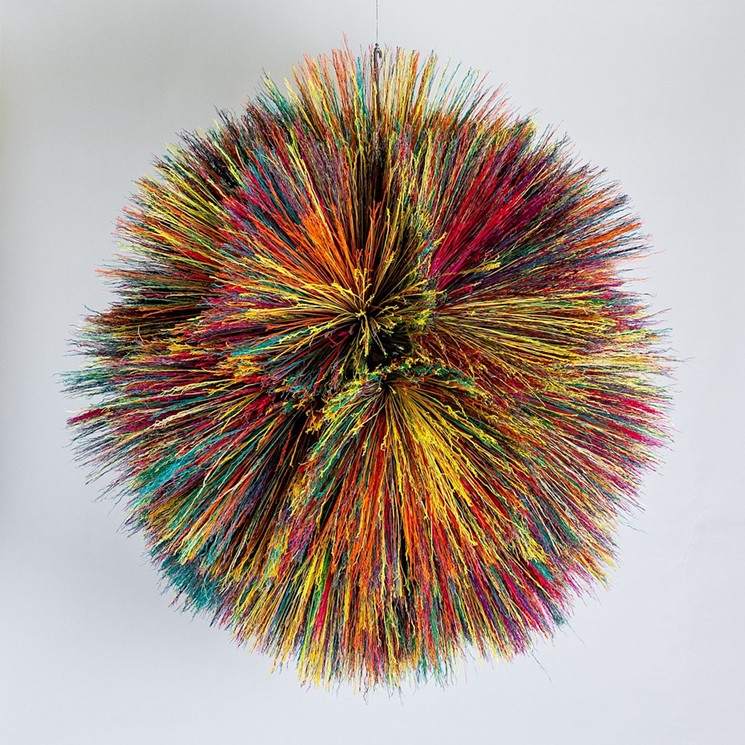 Broom Thing by Stephen Burks in collaboration with the Berea College Student Craft.
©Stephen Burks
The concept of collectible design isn’t a foreign one. Since its inception, collectors have flocked to the fair to snatch up one-of-a-kind pieces. But now that Design Miami/ Podium is the largest fair at this year’s Miami Art Week, with about 50 different exhibitors, the fair aims to set the standard for a safe, socially distanced art experience for all to enjoy.

Instead of feeling fabrics and collecting product brochures, visitors can expect a completely touch-free experience. QR codes will be everywhere, and in order to get in, visitors must purchase a timed ticket in advance. All attendees are required to wear a facemask and undergo a temperature check before being allowed to peruse all of the pieces — walking forward only — in what feels like a very personal, “boutique-like” experience.

While the Moore Building has a capacity of 4,500, Design Miami has set a limit of 150 people per hour, with no more than 30 per floor — a stricter parameter than what University of Miami Health advised.

Girl with Fans by ceramic artist and recent Rhode Island School of Design graduate Jolie Ngo.
©Jolie Ngo
But Design Miami has had to adapt in more ways than one. During the past few months of planning, it has shifted from a production-and-marketing team to a full-on digital team with the launch of shop.designmiami.com, which provides a space for all to browse and shop for all the pieces available at the fair.

Over the course of the ten-day event, the fair will also host a Virtual Talk Series, with more than 20 talks slated so far, including one with Louis Vuitton artistic director Virgil Abloh.

“Some will be prerecorded and some will be in real-time. It’s going to be amazing,” Roberts says enthusiastically.

“We have to continuously adapt to make sure we provide the safest and securest environment for visitors," she adds. "We have managed well so far and with the virtual visits and ability to experience the fair from your computer, I think we have come up with the perfect mix of in-real-life and online.”