Photo by Miami-Dade County Public Schools/Twitter
Superintendent Alberto Carvalho visits Southside Preparatory Academy on October 5.
When classes moved online during the early stages of the pandemic, child-abuse reports plummeted around the nation. Advocates worried that without teachers and school staffers paying attention to kids and watching for signs of abuse, many cases would go unnoticed.

But now that most students in Miami are back in school, reports of child abuse are on the rise. New data from Kristi House, a child-advocacy center in Miami-Dade County that coordinates services for child victims of abuse and sex trafficking, shows that while the number of reported abuse cases dropped around March, reports of abuse have been rising since September.

"We know about 40 percent of all abuse cases are reported by school personnel. You can imagine in March when schools closed down, we saw a decline in case reporting," says Amanda Altman, CEO of Kristi House.

From March to August of this year, Kristi House received 382 referrals of child-abuse cases in Miami-Dade County, a drop of one-third from the 575 referrals logged during the same period in 2019.

Although most children aren't normally in front of teachers during summer months, this year was different because of COVID-19. Many kids attend summer camps, daycares, or other activities where caretakers see them in person and can detect signs of abuse. But this summer, many of those programs went virtual or were canceled altogether. Altman says July is usually one of the months with the lowest number of referrals, but this year's numbers were even lower than normal. 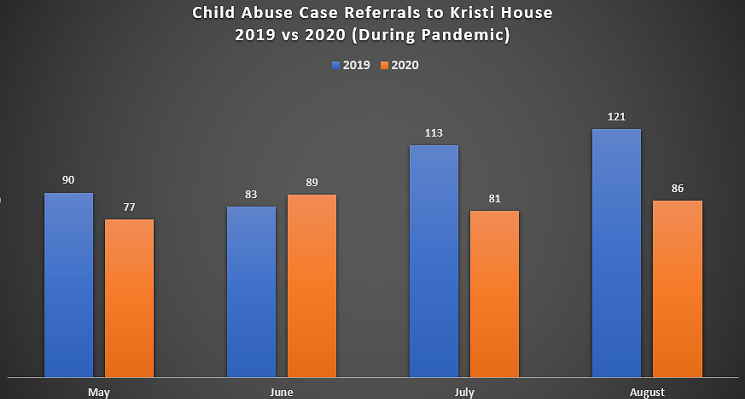 Referrals to Kristi House dropped this summer compared to 2019, particularly in July and August.
Data from Kristi House. Graph by Joshua Ceballos
"What's scary is that that does not mean the incidence of child abuse has lessened — it just means the reporting had lessened," says Altman.

Altman says it would be extremely difficult for teachers in an online setting to notice the signs of sexual or emotional abuse that they would normally pick up on in a classroom.

"With physical abuse, you might see bruises or something on a camera that could be easier to spot, but signs of sexual abuse are different. Changes in behavior, not wanting to talk about things, becoming overly aggressive — those are harder to notice," Altman says.

Now that many Miami-Dade County children have returned to in-person classes, Altman says Kristi House and other county agencies are beginning to get more reports of children who may have been abused, in line with normal averages. In September alone, Kristi House received 91 referrals.

But schools aren't exactly back to how they used to be before the pandemic, and Altman worries the new learning environment will make it that much more difficult for educators to detect key signs of trauma in children.

Miami-Dade County Public Schools has implemented a phased reopening plan. Nearly half of students are taking classes remotely while half are showing up physically, so teachers are juggling in-person and virtual education. Teachers have also had to rearrange their classrooms to allow for social distancing and must ensure that students are wearing masks and sanitizing their hands. That fractured attention means signs of abuse could fly under the radar, says Altman.

"It's almost in a worse position than all-virtual because teachers have to do this duality teaching — teaching kids virtually and in the classroom. It's incredibly difficult for a teacher to pay attention to any one student," she argues.

Altman notes that teachers aren't the only people who can report possible cases of abuse. According to the Mayo Clinic, signs of physical abuse include unexplained bruises, cuts, burns, or injuries that may not match a child's explanation of their cause. Sexual or emotional abuse may manifest itself as loss of self-confidence, social withdrawal, violent mood swings, or inappropriate sexual conduct by small children.

Kristi House maintains a list of local agencies in Miami-Dade County that help with a wide variety of issues such as abuse, bullying, and sex trafficking. The organization itself offers legal, clinical, and mental-health services for young victims of abuse who may have lasting trauma.

If you or a loved one are a victim of abuse, you can call the Florida Department of Children and Families abuse hotline at 1-800-962-2873.

"It takes a village to raise a child and to educate about signs of abuse and things to look out for," Altman says.