Photo by Sebastian Bednarski for Grails Wynwood
Watch the NBA Finals at Grails in Wynwood.
No one could have guessed that the Miami Heat squad — depleted by injuries and missing two key starters — could have pulled through in Game 3 of the NBA Finals on October 4. But it happened, and here we are.

Miami's Sunday-night win as nine-point underdogs was the second-largest upset in the NBA Finals in the past 30 seasons, according to ESPN. Missing Goran Dragic (torn plantar fascia) and Bam Adebayo (strained neck), the team got a huge boost from Jimmy Butler, who recorded a triple-double with 40 points, 13 assists, and 11 rebounds.

Tonight's Game 4 gives the Heat an opportunity to tie the series against the LeBron James-led Los Angeles Lakers in the best-of-seven series.

If watching the Heat compete in the 2020 postseason is on your to-do list, here are the best Miami sports bars to take in the NBA Finals action.

Very Important Note: The 9 p.m. start time for Game 4 (tonight), Game 5 (Friday), and Game 7 (next Tuesday, if necessary) guarantee that the games will outlast Miami-Dade's 11 p.m. countywide curfew, which means these bars will likely have to shut off their TVs and send you home sometime before the game ends. So please act accordingly. Sunday's Game 6 (if necessary) starts at 7:30 p.m., so you ought to be in the clear. It's always best to call ahead for hours. 690 SW First Ct., Miami
305-223-7004
americansocialbar.com
Watch the Heat battle it out on dozens of monitors that give you the perfect seat in the house, regardless of where you sit. With big-screen TV sets in nearly every corner, American Social offers a prime game-watching experience, including essentials like burgers, wings, and buckets of beer (or hard seltzer). There's also bottle service and bucket specials, including Bud and Bud Light ($18), Truly ($25), and High Noon ($25). Reservations are encouraged and can be made on the restaurant's website or by phone. Batch Gastropub is offering a number of promotions for patrons who watch The Miami Heat during the NBA Finals.
Photo by Ana Rivera for Batch Gastropub 168 SE First St., Miami
305-400-8023
blackmarketmia.com
In spirit of the recent Miami Heat win and Jimmy Butler's love for coffee, Black Market is supplementing its own extensive food and drink menu by debuting its own coffee-themed cocktail: "Butler's Barista Brew." The drink, made with rum, sweet vermouth, and organic cold-brew coffee will be priced at $10 during the NBA Finals. Reservations on game days are recommended and can be made by calling the restaurant. 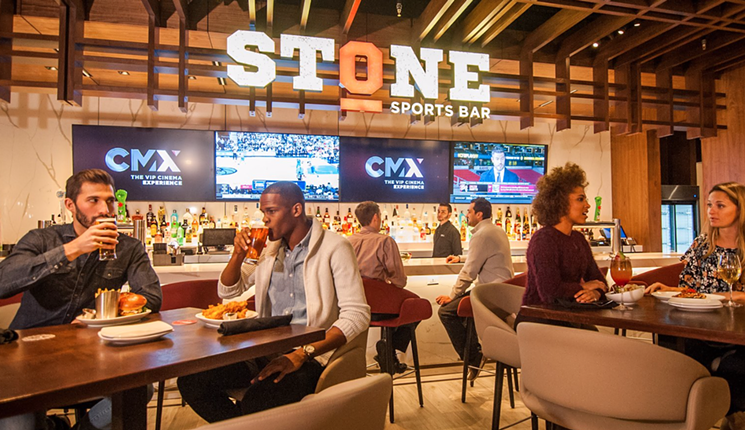 Some of the largest TV screens in South Florida will be showing the NBA Finals this week at CMX Stone Sports Bar.
Photo courtesy of CMX Cinemas

701 S. Miami Ave., Miami
305-639-8486
Facebook.com/CMXstonesportsbar
Watch the NBA Finals in Miami's only sports bar located inside a movie theater, on what are said to be the two largest TV screens in South Florida. If this were the Before Times, the bar would charge a cover to watch these games, but the Stone is waiving that. 2800 N. Miami Ave., Miami
786-870-4313
grailsmiami.com
With 60-plus 4K TVs, a spacious Miami Vice-themed outdoor patio, a well-curated cocktail list and hyper-local beers on tap to match, and a James Beard-nominated chef, Grails may be harder to beat than the Lakers have been this year. At this Wynwood watering hole, you can pair chef Giorgio Rapicavoli's free-range chicken wings with cocktails dreamed up by star bartenders Manuel Picon, Eddie Fuentes, and Hector Acevedo (the trio behind Cocktail Cartel) or go old-school and order one of the $20 beer pitchers priced especially for Finals game-time hours. Reservations are encouraged and can be secured on the Grails website.