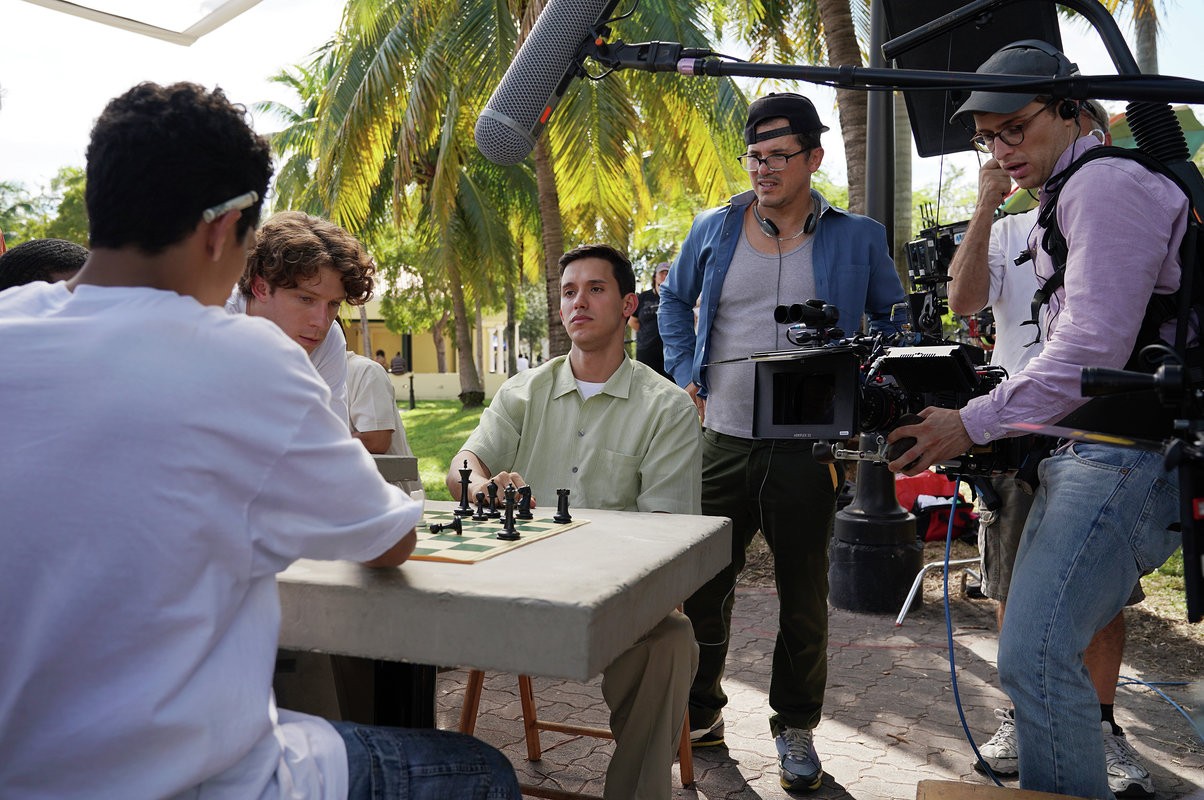 Photo by Jeff Daly/Critical Thinking
Actors Will Hochman, Jeffry Batista, and John Leguizamo (left to right) shoot Critical Thinking in Miami.
The movie Critical Thinking was more than two decades in the making by the time the cast and crew began filming in Miami in 2018. After reading a 1997 article about the Miami Jackson High School chess team in the Miami Herald's now-extinct Tropic magazine, producer Carla Berkowitz bought the rights to the story and spent years trying to make a movie about the unlikely pack of high school students who became one of the winningest teams in the nation.

Berkowitz ultimately linked up with actor and director John Leguizamo and co-producer Scott Rosenfelt to make the film a reality. But by time Critical Thinking was ready for release, COVID-19 had changed life in Hollywood and beyond. Movie theaters shuttered, and film festivals were canceled or closed to U.S. residents. So Critical Thinking wound up being quietly released to select theaters on September 4 and made available for direct download on platforms including Amazon Video, Apple TV, and iTunes.

The film's release won't be completely devoid of fanfare, however. Tonight, Berkowitz and actor Corwin Tuggles, part of the ensemble cast of chess players, will appear at the New York Latino Film Festival for a sold-out, socially distanced screening of Critical Thinking followed by a Q&A.

"It's at a drive-in in the Bronx behind Yankee Stadium," Berkowitz tells New Times. "That is the only festival we're actually able to attend."

So far, the film has garnered mostly positive reviews from critics, and it has a 93 percent rating on Rotten Tomatoes. Many have noted the diverse cast of Black and Latino actors, some of whom are more established and some who are making their big-screen debuts. Tuggles, who has appeared in episodes of Broad City and Orange Is the New Black, stars alongside Bumblebee's Jorge Lendeborg Jr., Spanish-language film actor Jeffry Batista, TV actor William Hochman, and Pose star Angel Bismark Curiel.

The characters in the movie are based on former students at Miami Jackson who took a chess class called Critical Thinking that was taught by coach Mario Martinez. The real-life chess players have stayed in touch with Berkowitz for the past 23 years and consulted on the film.

"It's a very inclusive movie and that has always been my goal. The lives of these boys and the coach were represented in an elegant and accurate way that they deserve," Berkowitz says.

Producer Carla Berkowitz with the five real-life Miami Jackson chess players.
Photo courtesy of Carla Berkowitz
The movie's release came just days before the Academy of Motion Picture Arts and Sciences announced new diversity rules for the Oscars, requiring films to include actors in underrepresented groups. Berkowitz says she applauds the change, noting that an Oscar nomination is a privilege, not a right.

"It's like a shakedown, but in a good way," she says. "I feel like it's a very good start in just waking the world up that no one's gonna watch your movie if you're not going to start including people of every race, color, gender, and ability."

Although some reviewers found the characters in Critical Thinking to be clichés of low-income people of color, Berkowitz points out that the movie is almost entirely based on actual people and events, right down to the chess matches. The real-life players helped reconstruct their old games move by move so that moviegoers — particularly those who play chess — would see an accurate depiction of tournament play.

"It was very important to me that no one said, 'Oh, that doesn't happen in chess,' 'That's fake,' 'That's movie magic,'" Berkowitz says.

The real-life chess players saw a screener of the movie at Berkowitz's home months ago, pre-COVID, but Berkowitz says she wanted to experience Critical Thinking on the big screen. Because movie theaters in Broward reopened in August, she drove up to Tamarac two weeks ago and watched the film as she'd always planned to.

"I was crying," she says. "To hear the sound design that I was a part of, and to actually be able to hear it in surround sound."

Nevertheless, she says, those watching at home are "enjoying it a lot, but not seeing it with popcorn."

"I'm very happy for them and for me, in the sense that I was able to follow through on a promise to them that was really kind of a crazy promise," Berkowitz says. "Watching them watch other people play them was, I think, the highlight of my life."