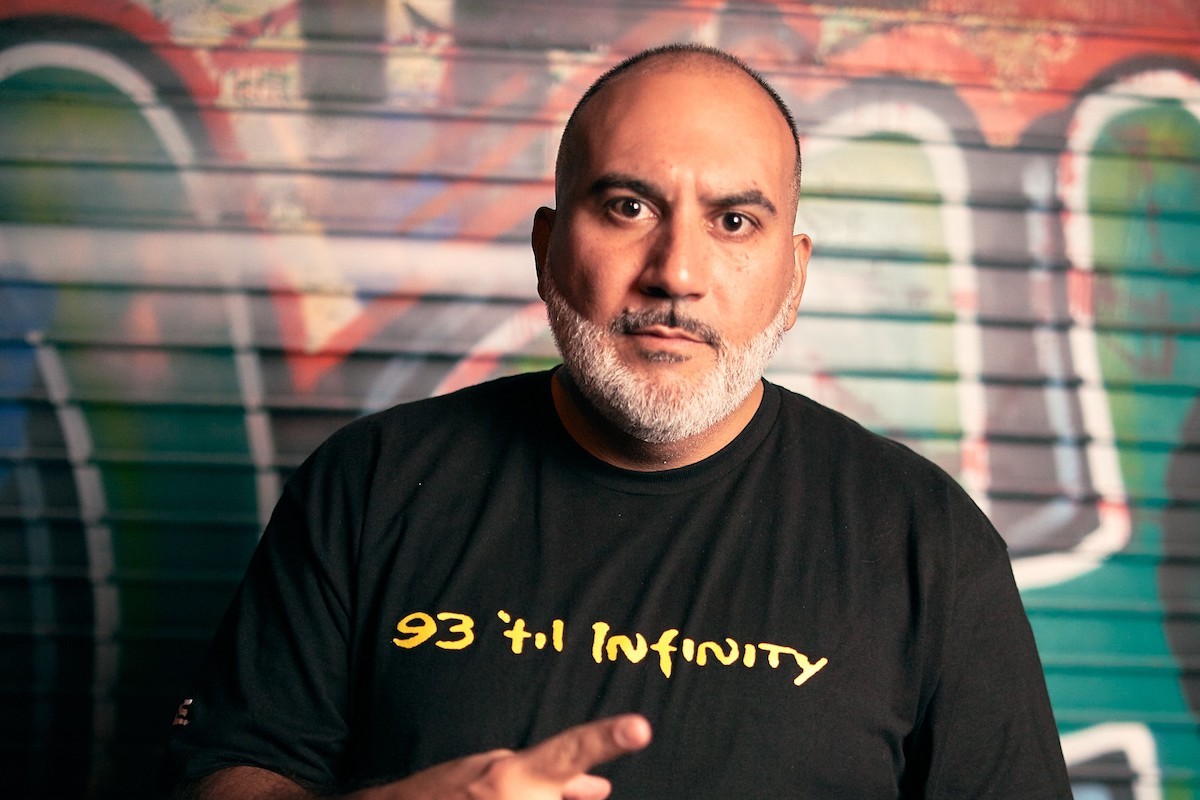 Photo Adrian Enningham/@drainflix
DJ EFN
If there's one industry that hasn't been disrupted by the coronavirus, it might be podcasting.

For supporting evidence, look no further than Miami's DJ EFN. During the quarantine, he has continued to crank out not one but two hip-hop-focused podcasts.

Alongside rapper N.O.R.E., EFN co-hosts the venerable Drink Champs, whose roster of guests has included celebs like Snoop Dogg and Mike Tyson. More recently, the new dad has been co-hosting The Father Hoods Podcast, wherein he, KGB, and Manny Digital discuss parenting from a hip-hop perspective.

For a medium he was slow to warm up to, EFN (born Eric F. Narciandi) has embraced becoming a pod person.

"A friend of mine in Kendall way back did a gaming podcast," EFN says. "He always told me to podcast, but that wasn't a thing in the hip-hop community. It was seen as nerdy."

But after he and N.O.R.E. built a rapport in the studio and on tour, they recorded a couple of demo episodes.

"It was like 2009. We had [former NBA player] Kenny Anderson and Fat Joe as guests. CBS Radio picked it up on the demos. Every week, we talked hip-hop out of my shop in Kendall and sent the pre-recorded tapes to Sirius XM."

After a few years of producing Militainment Crazy Raw Radio, the pair went back to their day jobs. N.O.R.E. made an album with Capone while EFN managed Miami rappers ¡Mayday! But in 2016, the duo decided to relaunch the old show as Drink Champs, celebrating their shared love (hip-hop) and vice (alcohol).

"The idea is to talk to guests from our generation. We want those with at least ten-year careers that aren't on a press run. It's about fluid conversation and drinking," EFN says. "Guests don't have to drink, but the alcohol is a star of the show. It's kind of like watching your uncles getting belligerent, and in between, you get all these nuggets of history."

Although the show now numbers 209 episodes, EFN admits it took a while for guests to feel comfortable mixing booze with a hot mike.

"It's kind of like watching your uncles getting belligerent, and in between, you get all these nuggets of history." — Miami podcaster EFN

"Artists weren't sure how to take the drinking element," he says. "They were guarded with how much they should drink. The episode with 50 Cent kind of changed that. He normally doesn't drink, but he wanted to promote his own vodka and he let it flow."

The few women they've been able to book — including Amber Rose, Trina, and Faith Evans — have been among the best guests, according to the co-host.

"We get a lot of crap because we don't have a lot of female guests," says EFN. "We try to book them all. When we get them on, they surprise me by how fun and candid they are."

Drink Champs' last pre-quarantine episode was recorded at the pair's Wynwood studio and aired last week on Tidal, Revolt TV, and the podcast's website. Moving forward, EFN says, the conversations are about to get virtual.

"Revolt TV has a program for the shows that's like a more professional version of Zoom," he elaborates. "We'll all have to drink on our own."

And though it's not a podcast, EFN has also been posting Mixtape Mondays on his Instagram page.

"It started as a joke," he admits. "D-Nice was doing live mixes that blew up. He resonated. Michelle Obama was in his comments. Because of his explosion, everyone started doing live mixes. People said I should do it. My background is DJ'ing, but now it's a hobby. So as a joke, I got out a boombox, pointed a camera at it, and played my old mixtapes. So it's just me in the middle of a Monday talking about my old mixtapes."