Photo by Ian Witlen / Red Bull Content Pool
Denzel Curry took the fight out of the ring to entertain fans during Red Bull Zeltron World Wide. See more photos from Zeltron World Wide here.
It’s 3:30 a.m., and my heart is pumping at what feels like a thousand beats per minute. As exhilarating as Saturday night’s Red Bull Zeltron World Wide rap battle between Denzel Curry and J.I.D was, these palpitations aren’t a lingering result of any lyrical wizardry or astounding showmanship- they’re from the excessive amount of Red Bull in my system. I didn’t have many other options as far as hydration goes: it was a Red Bull production, after all.

One could be forgiven for assuming that the show, which was advertised as a rap battle between the Miami and Atlanta rising stars, would be an improvisational showcase. That’s certainly what I was expecting when I arrived at the Innovation District warehouse hosting the event. Attendees knew ahead of time that the battle would take place in a wrestling ring, and that it would pit the two aforementioned hip-hop stars against each other for five rounds. In the end, Miami’s Red Bull Zeltron World Wide showcase didn’t turn out to be a traditional rap battle, but five rounds of a relatively standard hip-hop performance. Even so, it proved to be an incredibly riveting evening by two rappers operating at the peak of their abilities.

This wasn’t the first time Denzel Curry has taken part in a Red Bull-sponsored rap battle, and it won’t be the last. The roving hip-hop showcase is named for the Carol City-born star, and Zeltron is just one alias for the Zuu rapper who has claimed the throne as Miami’s current hip-hop ambassador. In fact, it’s not even the first battle of its kind to take place in Miami: back in 2018, Curry faced off against Flatbush Zombies in a show with the same format. Now, the Zeltron World Wide project is back with a vengeance: before last night's event, Curry squared off against Joey Bada$$ in November for an Atlanta-based event, and in three weeks' time, he'll take to San Francisco for a bout against Rico Nasty. 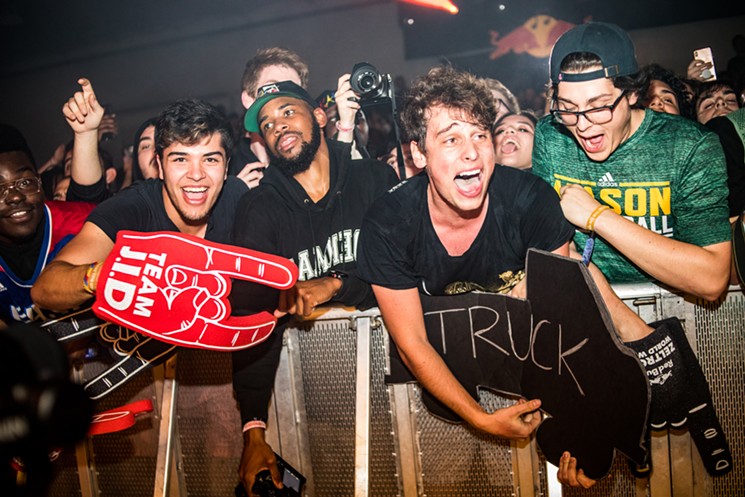 Fans root for J.I.D at Red Bull Zeltron World Wide. See more photos from Zeltron World Wide here.
Photo by Ian Witlen / Red Bull Content Pool
Saturday night's show was originally set to take place back in January, but vocal issues sidelined J.I.D and ultimately postponed the event until Leap Day. Neither performer showed any signs of rust, and what resulted was a rap performance so captivating that it put most run-of-the-mill Rolling Loud sets to shame.

Perhaps the most unique aspect of the show was — shockingly — not its main event, but its opener. Rather than carting in a lesser-known hip-hop act to warm the crowd up, the night began with not one, not two, but three campy wrestling bouts, each more audacious than the last. It was a fitting start to an evening in which each performance took place in a true wrestling ring, and entertaining to the point that I found myself wondering if more concerts should begin that way.

As for the main event, it featured exactly what one would hope for from the show’s two featured performers, with lyrical acrobatics on full display and an embarrassment of riches in regards to the setlist. One of the rap battle format’s many upsides is that it left no time for either performer to pepper any filler into the show: this was a hit parade of absolute bangers from start to finish.
click to enlarge J.I.D performs at Red Bull Zeltron World Wide.See more photos from Zeltron World Wide here.
Photo by Ian Witlen / Red Bull Content Pool
As the first round began, Denzel Curry wasted no time getting the show underway, diving immediately into material from last year's excellent Zuu. J.I.D hit all the high points of his solo material, including breakout singles like “Off Deez” and “151 Rum,” and even broke out some Revenge of the Dreamers favorites to great effect, including a standout closing performance of “Costa Rica.” Curry closed out his performance in the fifth and final round with “Ultimate,” of course. He followed his original breakout hit with his popular cover of Rage Against the Machine’s “Bulls on Parade,” a timely nod to both the recently-reformed rap-rock godfathers and Curry’s significant rock influences. After all, we’re talking about a guy who covered Bad Brains for one of two tracks that ended up on his Spotify Sessions EP.

Beyond the performances themselves, the event felt remarkably well-run for something that was staged in an empty warehouse and hosted well over 1,000 attendees. The sold-show meant the venue was packed, but it never felt unsafe or overly crowded. The bleachers on three of the ring’s four sides afforded fans solid sightlines from nearly everywhere in the venue, while still leaving room on the floor for rowdier attendees to mosh. From my vantage point, the sound was close to spot-on for the entirety of the show. The proceedings were also kept light through a memorable assortment of merchandise: fans were offered foam fingers advertising either "Team Zel" or "Team JID", and the event featured gig posters advertising the unique event.

After more than 150 minutes of blistering rap performances, guest appearances, and campy WWE-style wrestling matches, the two artists wrapped up the show together by performing "Sirens," before being crowned co-champions and each receiving appropriately flashy title belts. Though it's this writer's opinion that J.I.D should have walked away with the win for his lyrical feats, it was a fitting end to a show that validated a new format for rap concerts; other artists should take note of its success and potential. As the last song of the night came to a close, Curry told the crowd “This is my favorite fight so far,” and declared “You just witnessed history in the making.”

By all indications, he was absolutely right.