The Stories That Shaped Miami's Culinary Community in 2019

Photo courtesy of Genuine Hospitality Group
Stone crabs at Michael's Genuine.
Miami is a city steeped in colorful stories, balmy weather, and rich culture. People from all walks of life come here to live in the Magic City's neighborhoods and play on its beaches.

And as with any world-class city, people come to Miami to fall in love with the food and the people who make it. Each dish consumed and drink enjoyed comes with the story of the person behind it.

This year, the culinary community celebrated and mourned.

From the death of a beloved fixture on the local food scene to the elation of worldwide recognition for a bartender who's a mentor to many in the industry, these are the moments that weave the fabric of the culinary community in Miami.

Relax, pour a cafecito, and dig into the stories that shaped the local food scene in 2019.

Celebrity chef Ingrid Hoffmann (second from left) has raised more than $88,000 through GoFundMe for the Bahamas.
Photo courtesy of Ingrid Hoffmann
Miami's culinary community helped the Bahamas post-Dorian. With sustained winds of 183 mph, Hurricane Dorian pummeled the northern Bahamas, where the storm devastated Great Abaco, Grand Bahama, and other nearby islands. Just 24 hours after the storm passed, chef Ingrid Hoffmann touched down in the town of Marsh Harbour with a team of medical professionals to give aid and supplies to the people left injured, hungry, and homeless. Just 133 miles away, chef Karla Hoyos assembled thousands of sandwiches as part of José Andrés' World Central Kitchen. Acts of kindness also happened in the United States, as Miami's restaurants rushed to hold fundraisers and donation drives. Local breweries collaborated on special beers whose proceeds benefited the Red Cross, World Central Kitchen, and other relief organizations. Once again, Miami's hospitality community united to help its neighbors. 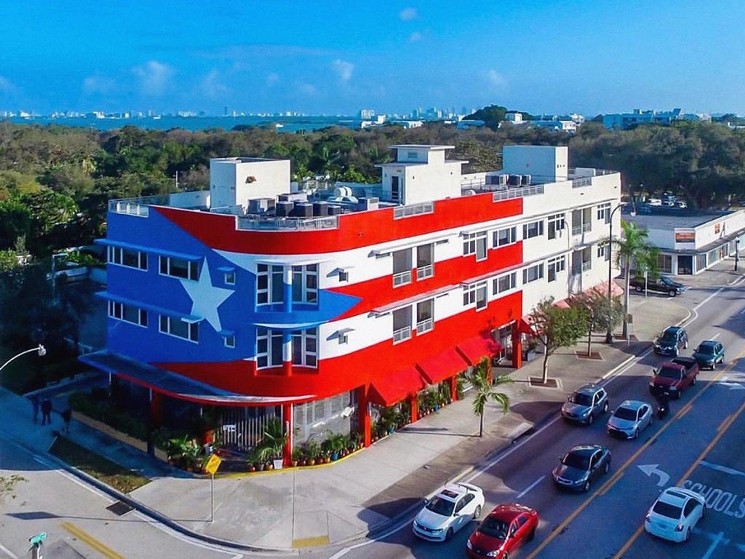 Joey Cancel
La Placita's flag stayed put. When chef Jose Mendin and TV personality Julian Gil decided to open La Placita, they wanted to celebrate the culture of Puerto Rico through food, music, and art. The restaurant's partners commissioned artist Hector Collazo Hernandez to paint a rendition of the Puerto Rican flag on the building's façade. The three-story mural was completed in one day, and the restaurant partners had obtained an event permit to turn the live-painting into a block party. The flag quickly became a highly Instagrammable moment for which people drove to Miami's MiMo District to take selfies to show their Puerto Rican pride. The City of Miami, however, cited the partners for not contacting the Historical and Environmental Preservation Board and requested the building be repainted. More than 100,000 people signed a petition demanding that the flag stay. It still stands, and people still stop to snap photos of the proud mural before indulging in big plates of mofongo at the restaurant. 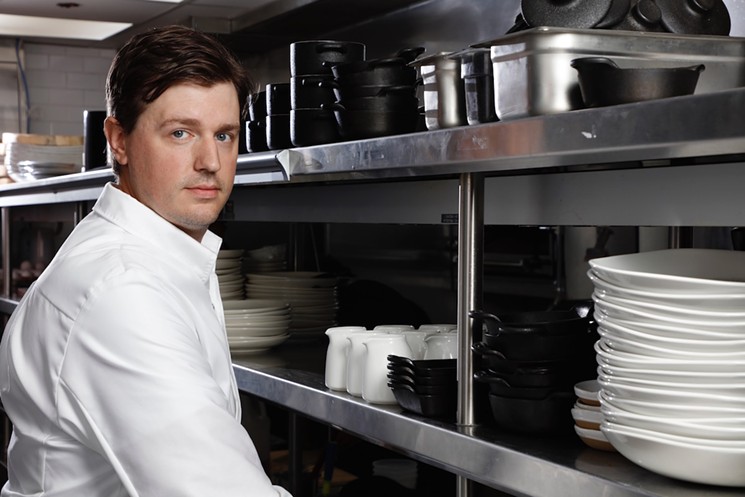 William Crandall
Photo courtesy of Papi Steak
Will Crandall began the path to redemption. In May, chef William Crandall resigned from his chef de cuisine position at Stripsteak by Michael Mina at the Fontainebleau after New Times reported he was spotted wearing clothing bearing the logo of the Proud Boys, a far-right neofascist group. The Miami culinary community was shocked and divided over the news of Crandall, who was known as a talented chef and a family man. Crandall reached out to restaurateur and nightlife mogul David Grutman, who hired him as the lead chef at Papi Steak. Grutman said, "For him to have the courage to message me knowing I have a club at the Fontainebleau must've taken a lot. And I think a lot of problems we have in this world come from people not knowing each other, so I wanted to give him a chance to know a couple of Jewish guys." 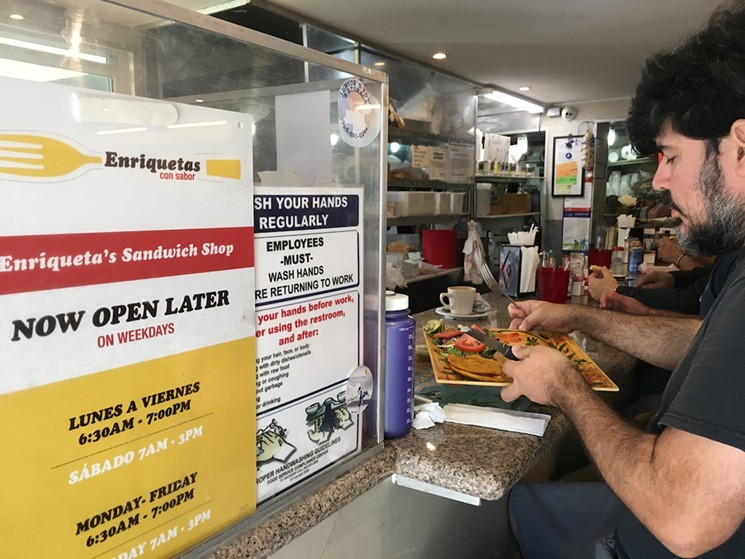 At the counter of Enriqueta's
Photo by Zachary Fagenson
Jose Pla passed away. In September, Miami said farewell to Jose Luis Pla Elias, proprietor of Miami's most beloved sandwich shop, Enriqueta's. The 70-year-old, surrounded by loved ones, passed away after several years of illness. Pla purchased the iconic eatery in 2000 to run with his two daughters, Leidys and Belkis. As owner/operator, the senior Pla could frequently be found standing at the register and chatting with the cross-section of locals who frequented the place. His daughters still run the café even as the neighborhood continues to evolve with high-rise condos sprouting around the tiny sandwich shop. Julio Cabrera
Photo by Anthony Nader / 52 Chefs
Julio Cabrera was named Bartender of the Year. At the annual Tales of the Cocktail Spirited Awards in New Orleans, the world learned what Miami has known all along — that Julio Cabrera is bartender of the year. Cabrera, a partner at Cafe la Trova, has made a lifelong commitment of bringing style and sophistication to the role of bartender. Cabrera's talents as a cantinero are on display most evenings at his Little Havana restaurant, but his light always shines in his passion and through mentoring a new generation of bar professionals. 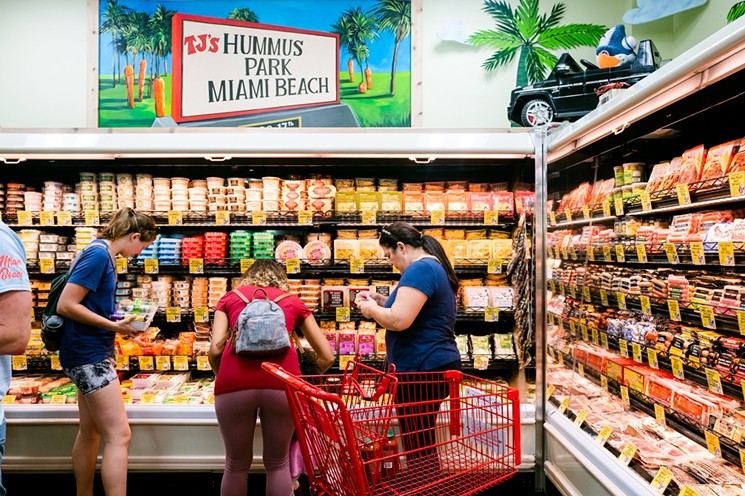 Daniella Mía
Trader Joe's opened in South Beach. For years, it was a rumor. Then came confirmation. Finally, after what seemed like an eternity, Trader Joe's opened a location in South Beach this past August. The tropical-themed grocer was an instant hit with Miami Beach residents, who could now shop for Speculoos Cookie Butter and Two-Buck Chuck in their own neighborhood. When visiting, be sure to check out the art deco-themed murals that mix historic landmarks with store products: For example, a Lummus Park-inspired "Hummus Park" mural hangs above the appetizer section, and a painting of cheese hotels such as "Stilton" and "Pesto Place" mirrors the buildings on Ocean Drive. 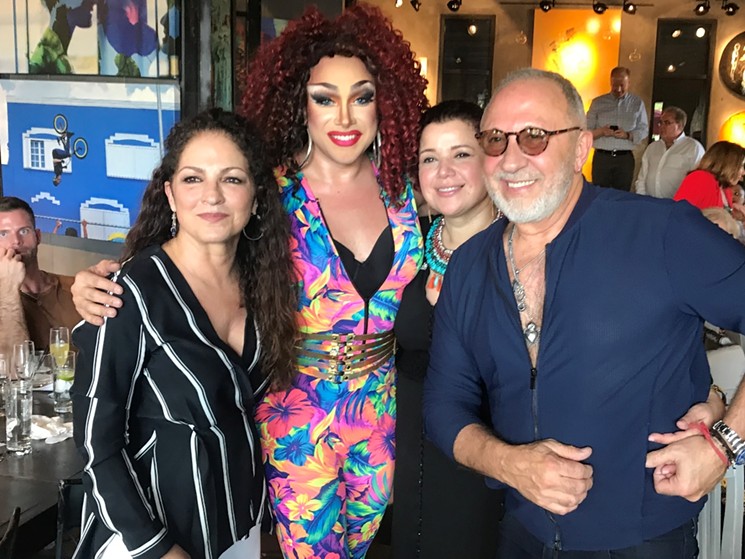 Gloria Estefan (left), Athena Dion, Ana Navarro, and Emilio Estefan at R House.
Courtesy of R House
Gloria Estefan and Ana Navarro danced the conga at Drag Brunch. Once in a while, something happens in Miami that's so Miami it makes Miami Vice look like it was shot in Wisconsin. That moment occurred when Gloria Estefan joined her good friend Ana Navarro in a rousing conga line. That in itself would be a golden moment, but to put it over the top, they were joined by drag performer Athena Dion, dressed as Estefan, to line-dance to Estefan's hit song "Conga!" Somewhere, in that moment, the fabric of time ripped open and Don Johnson, in a white suit, rode a flamingo over a pastel rainbow.

See more photos of the Wynwood Yard's closing weekend here.
Laine Doss
The Wynwood Yard closed. The Wynwood Yard reflected the neighborhood in which it resided: a scrappy yet artistic meeting place formed by art, food, music, and passion. This past May, the Yard closed to make way for a mixed-use complex called Wynwood Green. Della Heiman, founder of this urban oasis, said of the Yard's planned departure: "It's going to be sad thinking of it not being here, but everything has its time and place, and it's the right time to close this door and open a different one." Though Heiman will open the Doral Yard in the coming months, the closure of the Wynwood Yard was a blow to a neighborhood that is slowly losing the bohemian charm that put it on the map. 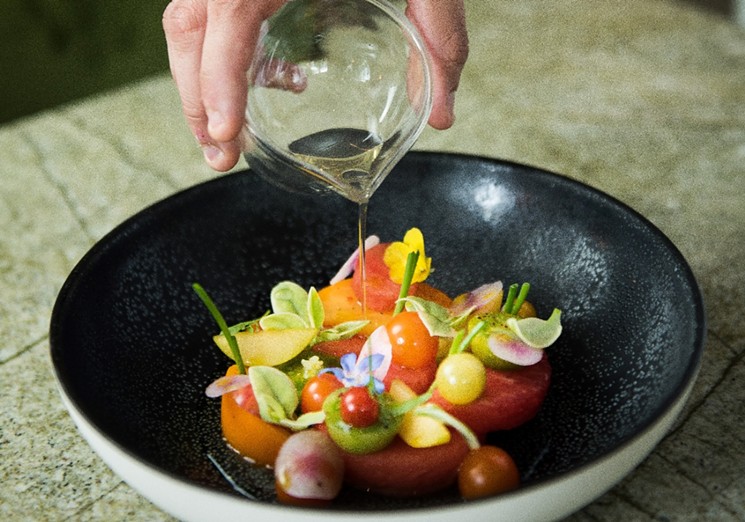 Watermelon salad at Le Jardinier.
Photo courtesy of Le Jardinier
Joël Robuchon's legacy endured. Four years ago, Joël Robuchon announced he would open a restaurant in the Miami Design District. Half a decade later, he opened two restaurants. Sadly, the master chef passed away at the age of 73 last year, just months before the opening of those Miami eateries.  L’Atelier de Joël Robuchon, along with a new concept by Robuchon protégé Alain Verzeroli — Le Jardinier — opened in August. Though Robuchon is no longer at the helm, Christophe Bellanca, culinary director for Joël Robuchon USA, says the chef's name must endure. In a New Times interview, Bellanca said, "Mr. Robuchon left us almost exactly one year ago. This is going to be the first restaurant after he passed, and the team and myself think about that every day. We need to respect Mr. Robuchon's legacy, and this is very important. We pay attention to every detail." 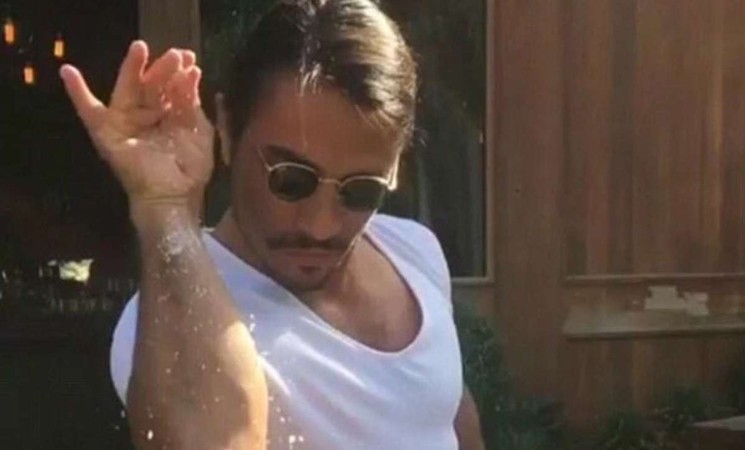 Nusret Gökçe, AKA Salt Bae
Twitter
Salt Bae stirred controversy once again. It looks like Nusret Gökçe, better known as Salt Bae, might just get an annual spot on New Times' yearly roundup of stories. Last year, Salt Bae outraged Miami's Venezuelan community by serving Venezuelan President Nicolás Maduro and First Lady Cilia Flores at his Istanbul eatery. Then, this past January, a complaint filed with the U.S. Equal Opportunity Employment Commission (EEOC) claimed Salt Bae didn't want to see any female servers on the floor of his Brickell restaurant while he was in town. And a lawsuit filed earlier this year alleges the restaurant violated the Fair Labor Standards Act by failing to pay workers legal wages and tips; in August, a federal judged ruled the wage lawsuit can be classified as a class action, with at least 100 workers expected to sign on to the suit. A trial has been set for June 8, 2020, which means Salt Bae could very well make next year's list. 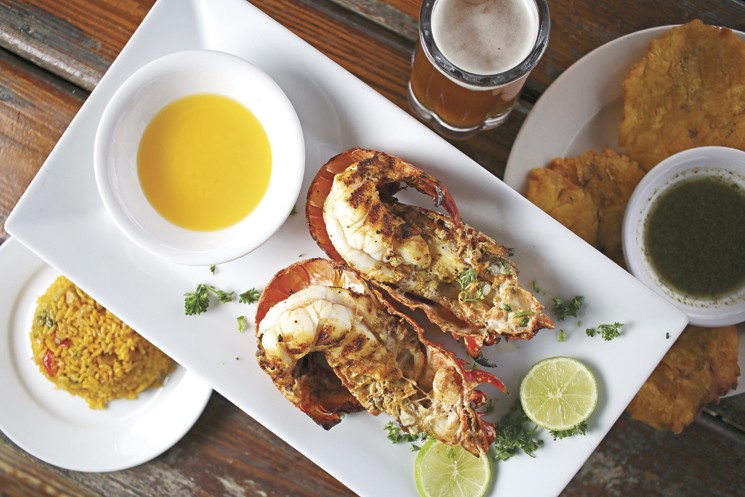 Dive into Miami's culinary scene.
Photo by Michael Campina
"Required Eating" debuted. For decades, New Times has been dedicated to providing engaging local food coverage, but this year, we on the editorial staff put our heads together to come up with "Required Eating: 100 Miami Restaurants We Can't Live Without." We think it's an important look at the eateries that define the city. On the list you'll find burger joints, sandwich shops, and date-night spots. Restaurants are where we break bread with friends, relax after a hard day, and celebrate life's victories both large and small. Because now is the time for planning new year's resolutions, why not make yours a goal to try every restaurant on the list?