Photo courtesy of 50 Eggs
Chica's Lorena Garcia.
Lorena Garcia furiously works behind the burner while a group of about 50 invited guests, with wine in hand, watch. The celebrity chef and author is whipping up a ceviche for a preopening tasting for her Miami restaurant Chica, set to open for dinner service today.

After preparing the dish, many chefs would hide in the back. Instead, Garcia takes a rag and aggressively cleans the grills and countertops at the Edgewater house she turned into a culinary loft.

Garcia is all about the hustle. Though the chef has an eatery at Miami International Airport, she hasn't helmed a restaurant in Miami since 2008, when she sold her two Design District restaurants: Food Café and Elements Tierra. Both opened in 2002 when the Design District was still in its fledgling stage. Garcia also owns eateries at the international airports in Atlanta and Dallas-Fort Worth, is a cookbook author, and has lent her name to a cookware collection.

Her latest restaurant occupies the former Soyka space. Described as a "celebration of Latin flavors," Chica draws influences from the chef's native Venezuela as well as Peru, Brazil, Mexico, and Argentina.

This is actually the second iteration of Chica. The original, which debuted in May 2017, resides at the Venetian Hotel in Las Vegas. Conde Nast Traveler said of the menu: "Think of your imaginary, indulgent Venezuelan grandmother and how she might push comfort food on you; then give her a sexy, feminist spin." 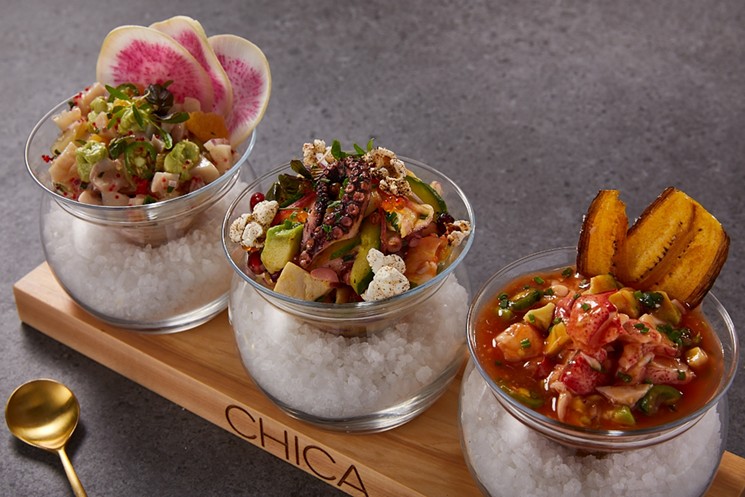 Ceviche sampler at Chica.
Photo courtesy of Chica
The same can be said of chef/partner Garcia, regarded as the first Latina chef to run a restaurant on the Las Vegas Strip. At the Venetian, she shares valuable casino real estate with Thomas Keller, Emeril Lagasse, and Miami's Timon Balloo. 50 Eggs, the company that owns and operates Chica, also operates an outpost of Yardbird Southern Table & Bar on the Venetian's restaurant row, which has earned the nickname "Little Miami" for offering three Magic City-centric establishments.

Yet in a city filled with megawatt celebrity chef talent, Garcia has carved a significant niche in the framework of Las Vegas. Of the nearly 4,000 restaurants on the Strip, only a handful boast a female chef on the marquee. Garcia — in the company of Mary Sue Milliken and Susan Feniger (Border Grill at the Mandalay Bay Resort) and Giada De Laurentiis (Giada at the Cromwell) — points out she is the only female chef on the Venetian's Culinary Titans wall, a 21-foot-tall homage to the resort's culinary talent, which places Garcia alongside Wolfgang Puck, Keller, Mario Batali, Buddy "Cake Boss" Valastro, and Lagasse.

Garcia says the Las Vegas glitz happened, in a way, by chance. "I worked with John [Kunkel, founder and CEO of 50 Eggs] for a couple of years on Chica's conceptualization, menu, and design. We were waiting for that special location, and the one in Las Vegas opened up." Garcia says she hadn't really visualized opening Chica in Las Vegas, but she trusted Kunkel. "I have to say John is a fantastic restaurateur. He knows what he's doing. And Yardbird is right next door." 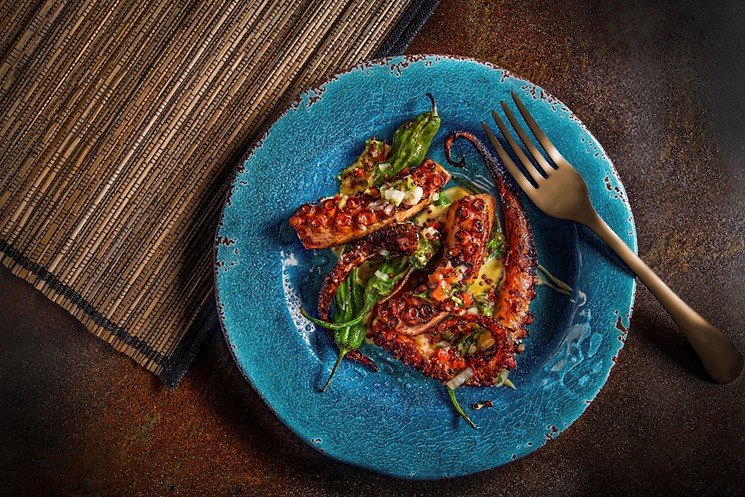 Grillled octopus at Chica.
Photo courtesy of Chica
Garcia says she tweaked the menu, originally created for Miami tastes, to appeal to Las Vegas visitors. She says she considers the Miami location sexier and more upscale than its Sin City sister. The menu at the new Chica also returns to its original format: The chef mixes Florida classics such as stone crab claws with three kinds of ceviche ($16 to $17), and shared plates include grilled octopus ($22), pork belly tacos ($12), and a roasted poblano tamale ($16).

The heart of the restaurant is the wood-burning oven fueled by Brazilian hardwood. From it emerge lamb barbacoa cooked in banana and avocado leaves ($72), Venezuelan braised short ribs ($64), and an Argentine-style parrillada of lamb chops, skirt steak, pork belly, chorizo, and charred padrón peppers served with chimichurri and fire-roasted salsa. The hearty meal serves three and costs $98.

Garcia says that after years without a solid presence in Miami, she feels good to be able to share her food with the city she calls home. "It's a dream come true. A chef needs to have a restaurant, and Miami needs to be home to Chica."

Though Garcia will continue to make monthly trips to Chica in Vegas, she plans to spend plenty of time at her new location. "I like to be involved. I'm all about my team. If they see me cooking and they see me being humble, that's how I earn their respect."